Metro K-drama Round Up: Metro Editors React To The Finale Of 'Flower Of Evil'

The intense emotions were held up to the very end of the series finale—and the fans totally loved it!

We’ve witnessed a scale of emotions following the story of Lee Joon Gi and Moon Chae Won’s character in Flower of Evil. Although the series mostly portrayed Do Hyun Soo (Joon Gi's character) as someone who’s violent and emotionless, the season’s finale gave us a satisfying turn when they granted its viewers a well-deserved happy ending!

For a man who's set to bury his dark past like Do Hyun Soo, having a detective wife turned out to be blessing in disguise since it allowed him to finally free himself from the person he once was. And despite the chain of events that could have ruined their marriage, Cha Ji Won (played by Moon Chae Won) remained strong as a wife and mother which allowed them to move past their troubles.

As the overall suspense that the series brought to its viewers have made them yearning for more of Do Hyun Soo and Cha Ji Won. So as we bid goodbye to another extremely engaging K-drama series, scroll down to see what our editors have to say in the finale of Flower of Evil!

What did you think about the finale?

Anna: It was satisfying is what I would say. I really liked it. It justified the whole series and for some reason, I keep thinking back to his first encounter with his best friend. That you know, in the basement and everything in episode 2. Like what he turned out to be that, ‘wow, that encounter was so intense for a first encounter.’ But then I was like, ‘yeah, they probably needed it to establish the whole theory that he’s a serial killer or like to establish the dark path, and to show that he’s capable of doing stuff. But overall, it’s satisfying.

Leah: I super super agree! As the show is winding down I kept on asking myself, ‘how can a happy ending be believable?’ with all the damage that’s been done to the relationship, and with all the emotional baggage that’s been revealed step by step, is there really hope for their family to still come together? And somehow they did find a way and it’s not glossed over. The past is not glossed over, but it is also easy to imagine that they can build a new future. I think it’s quite a feat of story telling.

Justin: I’ve made it to the 15th episode today and I was thinking if I should read about episode 16, but I felt like that wouldn’t do justice to the show. It’s a show that I enjoyed watching and I remember that since it started, I would carve out weekends and I would really hate getting spoiled. Carve out time on the weekend to just dedicate and I wouldn’t even check my phone for watch time for 'Flower of Evil'. I’ve kind of succumbed and raised the white flag and said, ‘You know what, I’ll just find out but I’ll still watch.’ Because Leah told me earlier that there’s still gonna be nuances that I’ll still be able to appreciate from watching the finale later. So, far from where I am in episode 15, I was like sweating! It’s one of the shows I really enjoyed. I like it more than 'It's Okay To Not Be Okay,' personally.

SAB's Debut Single 'She' Gets Featured in 'Flower of Evil'

Leah: I think what Flower of Evil proves is that there is a way to make an ending happy without compromising the tone and narrative arch that came before it. Yung kaya pala ng writer na gawin yon. When I was trying to figure it out on my own, I was thinking, ‘how can they removed all the past lives that will hang over them?’ Diba if you’re in marriage counseling they always say, ‘don’t hold on and all these things.’ But if it’s as big as you pretended to be a serial killer—they still found a way.

Geolette: I also think that the last 3 episodes also gave us very cinematic and very beautiful scenes. Like that scene at the cliff, right? It was so beautiful and it was so tranquil there.

Leah: Yes! And there are clues there because in the flashback scenes his dad tells him that, ‘don’t go to the cliff. There’s a cliff at the end of this path.’ So when the cliff is seen, ‘oh. Kaya naman pala.’

Geolette: What I loved about this show is that they managed to up the stakes. Because that’s what I realized when I started watching all these Chinese Historical dramas. They’re high-stakes because they’re fantasy, it’s always life or death. And it’s like that for every episode. So for every fight, it’s life or death or like someone’s gonna succumb and so on. But here, they managed to do it in this show, and that’s hard to create in a contemporary scene, no matter which genre. That you won’t say, ‘oh someone’s gonna die again,’ and so on. It really creates so much tension and emotional investment to everyone who’s watching.

Anna: It’s that kind where there’s so much going on and it’s so satisfying that I wouldn’t mind watching it again—like the whole thing. Just because parang, ‘did I miss something? Or like let me go to that part when etc…

Leah: It’s definitely worthy of a rewatch! It’s really one of those shows that I think demands a rewatch. Because I’m sure then, there will be things you’ll pick-up, and then because you already have the tension out of the way, you can just get all the good feelings in it as you’re watching. I have to say that their chemistry as a married couple is so believable. What my sister did naman was she decided to watch Criminal Minds because that was their first show together, and she said that she feels like it was a prelude to Flower of Evil. And that they were really able to build a connection in that show that then comes out in this one.

Geolette: In the episode where they’re in hand-cuffs and just arguing like, ‘why won’t you believe me?’ or ‘why should I believe you? I know you so well? Of course you’re gonna leave me the first chance you get because you don’t want me to get hurt, right?’ They’re arguing like a real couple except that it’s about a fugitive, a cop, and so on.

Justin: The way that they resolved their conflict, that was a very heated married couple conflict or argument, and then it was just really nice that they still ended up in the same team. It’s really realistic for such an insane story line. It’s nice to see their chemistry that way and I think both of them are such great actors. Even with Moon Chae Won's character, like, ‘is my husband this evil person?’ she wasn’t even confronting him the whole time. You could feel that feeling where she’s really torn because of all the great memories they had. And then turns out that all those great memories are real, and he isn’t the monster just like the title of the episode 11 or 12. I love the packaging of this season. I mean, I know I’m only in episode 15, but it feels like every episode I’ve watched so far was so satisfying and still left me wanting for more.

What are your favorite scenes from the series?

Anna: I think it was in episode 13 when Do Hyun Soo is all tied up and it’s the moment of truth. He’s gonna see her—he’s gonna see his wife and then parang her reaction that her that he’s Do Hyun Soo. But when the door opens, she’s just like, ‘are you okay, sweetie?’ That was like so her moment. It was subtle even. And if you were kind of half asleep and it’s too late at night and you were watching, you might miss it pa nga. But I thought that that was so well done and she was so cool and I was like, ‘yay! Girl power!’

Leah: Me, I have two. There was that hospital scene, kasi diba her mom gets hospitalized, and then she’s there in the hospital with her mom and her daughter. And her mom said, 'we don’t need him. You and your daughter and I, let’s just start anew, forget we ever met him and everything.' And then she was like really holding on to her love for him. Because it’s just really her and her mom. Kasi diba she talks about losing her dad, and like for her to really stand up for her marriage that way, and then knowing already everything, she’s not like that blinded ingénue at the start. By that hospital scene, she already knew. Her choice was still fight for my marriage, fight for the one I love. And then, in that scene nga on the cliff, he starts to see his dad and he doesn’t even know anymore. For me, that was an acting master class. He’s saying, 'i don’t know if you’re real, I don’t know if you’re real.’ And then you’re just like, ‘How? How do you act that after the action scene?’

Justin: Honestly, I have several. One of the scenes that stood out to me was one in the earlier episodes when she was mistrusting him, and she was washing the dishes and she was breaking up with him. That was the first time you see the emotions on his face where he was really broken. This was early pa in the series when you kind of still think like he might actually be a bad guy so it was kind of like the turning point for me where I started like really getting invested in this character and that maybe he’s kind of a good guy after all. So, when I saw her break up with him—and this was so soon after that time when he fetched her with the umbrella and the rain, so the emotion and just seeing that realness in his face, and the sadness and how broken he was, was really one of my favorite heartbreaking moments.

Geolette: I’m actually gonna add up all those scenes. Those flashbacks in the beginning where they first met, their first date, their interactions where she’s being super pushy and she’s like, ‘don’t you like me?’ even up until when they got married. So I’m gonna add all of those up to become my favorite scene. 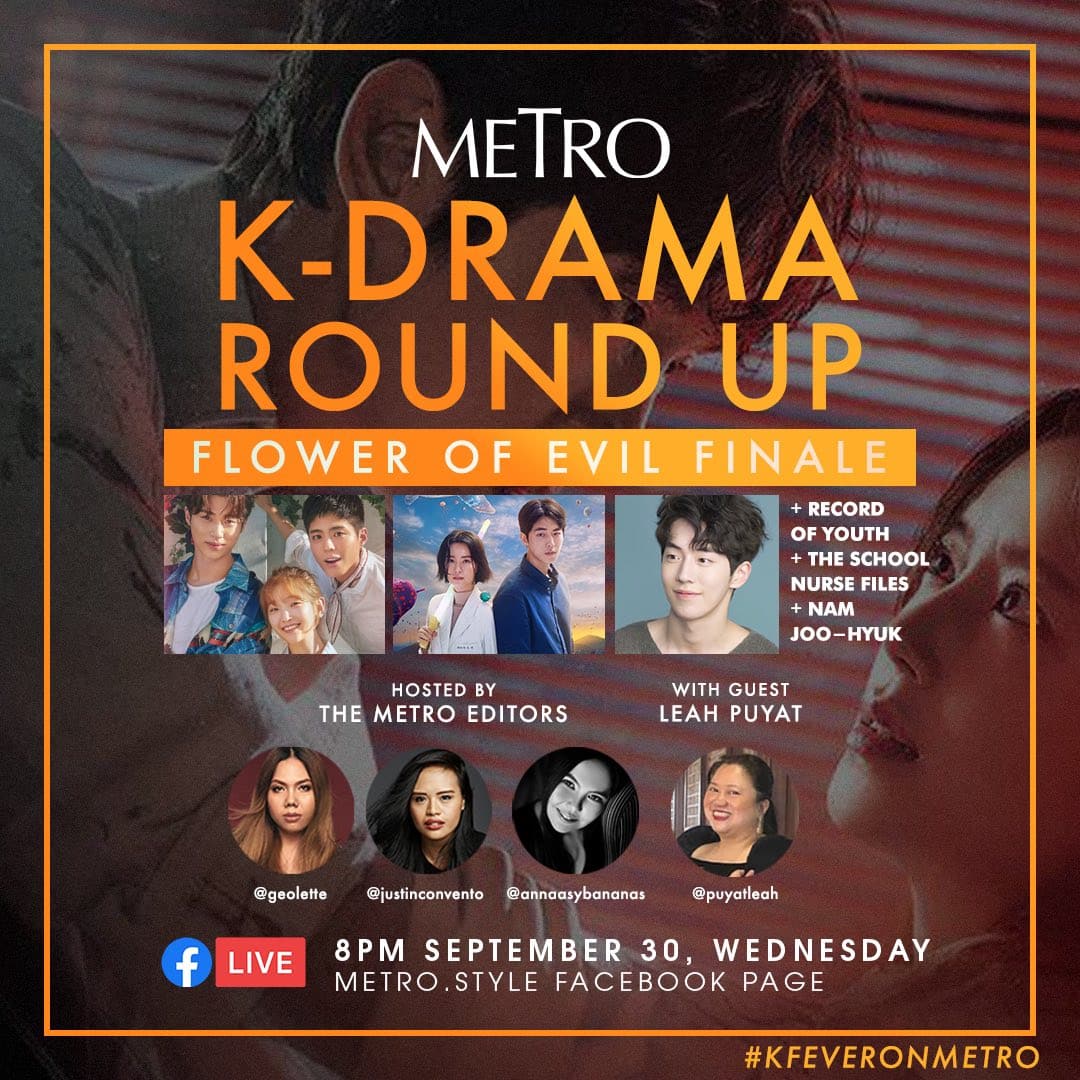 Watch the full episode of our Metro K-Drama Round Up on the finale of Flower of Evil, here.

Stay tuned to our weekly Metro K-Drama Round Up on our Facebook page, every Wednesday night at 8pm. Join our Metro K-Drama club, here.