From global sensation ‘Crash Landing on You’ to the ever-classic ‘Secret Garden,’ Hyun Bin is a true K-drama star. Here, we round up all 11 of his dramas to catch him in!

Having been a fixture in the entertainment industry since making his debut in seventeen years ago, Hyun Bin is a true star in both Korean TV and film. Plus, his most recent project, Crash Landing on You, was a smash hit worldwide, gaining the actor the most-deserved admiration and love from fans from all corners of the globe.

Hyun Bin in 'Memories of the Alhambra,' 'Crash Landing on You,' and 'Hyde Jekyll, Me' | tvN, SBS

Hyun Bin’s first official role as an actor was in the 2003 television series Bodyguard. After, he worked on a sitcom and a romance drama. He set his sights, as well, towards the movies—making his film debut the same year in Spin Kick, a youth sports movie. However, it was with romantic comedy series My Lovely Sam Soon (2005) with Kim Sun-a, one of the highest-rated K-dramas of all time, which marked his genuine success in the industry. The role of Sam-sik was an instant hit and made Hyun Bin incredibly popular beyond South Korea, making him a household name in other Asian countries, as well.

The actor then pursued projects that would allow him to expand his acting profile. These include Hyun Bin’s first film as a lead actor in A Millionaire’s First Love, underrated TV drama The Snow Queen (which earned him his first nomination at the Baeksang Arts Awards), and more. Then, his popularity skyrocketed further with his role in hit drama Secret Garden, where he played CEO Kim Joo-won who fell in love with Gil Ra-im (Ha Ji-Won), a charming stunt woman. This character created a “Hyun Bin Syndrome” and also garnered him recognition at the 2010 SBS Drama Awards and the 47th Baeksang Arts Awards. He also contributed to the OST of Secret Garden with track “That Man”—which reached number one in eight Korean music portals.

Then, in 2011, Hyun Bin appeared in two films—Come Rain, Come Shine and Late Autumn. Both were received well by critics who were impressed by his talent and skill. Later that year, he walked the red carpet at the 61st Berlin International Film Festival, where both films had been selected to be screened. He described this honor as one of his happiest achievements. After these back-to-back films, Hyun Bin began his 21-month mandatory military service as a soldier in the Marine Corps. He was discharged on December 6, 2012, with a citation for being an exemplary soldier.

His acting comeback was in 2014 for The Fatal Encounter, his first period film, playing the role of King Jeongjo. His return to the Korean drama scene (after a total of four years!) was in romantic comedy Hyde Jekyll, Me in 2015. His career then enjoyed a resurgence in 2017 onwards, with his roles in films such as Confidential Assignment, The Swindlers, and The Negotiation (across Son Ye-jin), as well as hit K-dramas, of course!

Hyun Bin as Captain Ri in 'Crash Landing on You' | tvN, Netflix

Hyun Bin is indeed a true success story in the Korean entertainment business, continually surprising audiences through the course of his prolific acting career with choice roles and projects which are equal parts special and memorable. Below, we list all 11 of his dramas which show off this K-drama heartthrob's undeniable talent and versatility! Due to his valiant personality, Kyeong-tak’s (Cha Seung-won) troubles are never far away. While in search of work, he saves Yu-jin (Han Go Eun) from danger and winds up as a bodyguard employed by Seong-su. Soon enough he finds out Seong-su’s dirty secrets and heads off to form a protection and security company of his own. As well as taking care of an ill grandmother, Na-Young (Lim Eun-Kyung) starts working at Gyeong-tak’s family restaurant to make ends meet, and soon falls in love with Gyeong-tak, learning his true heart and undeniable charms. 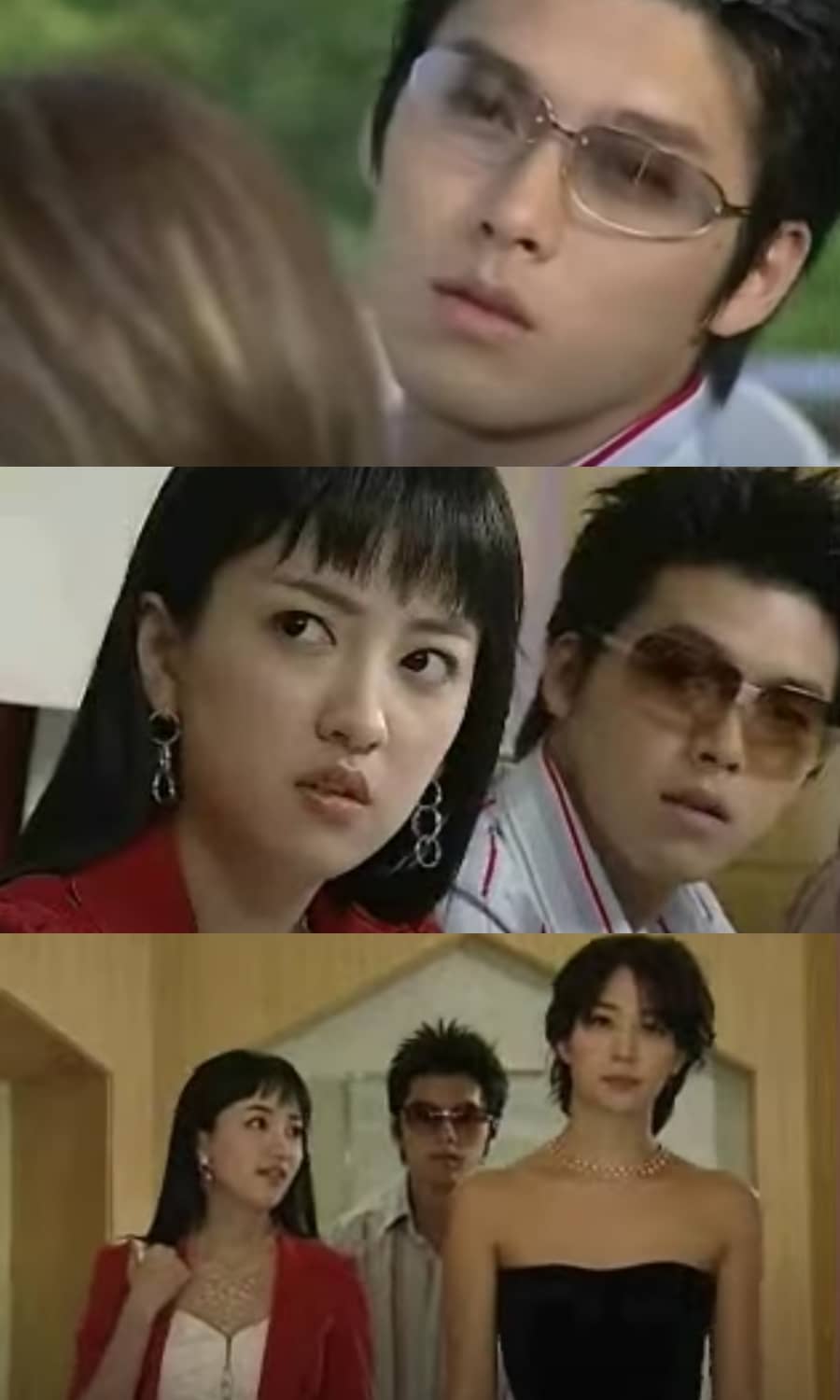 Meanwhile, Seoung-su (Song Il-Kook) causes Kyeong-tak trouble at every corner while trying to find a hidden daughter of the President of Korea. Soon he finds out she works at Kyeong-tak’s restaurant and goes in to face with him. Bodyguard marks Hyun Bin's first role in a TV series in a supporting but memorable role. Nonstop is a comedy and sitcom that broadcast its first season in 2000, continuing on every year with a total of 5 more seasons. The series was popular for its cast of teen idols, many who debuted through the show gaining vast popularity. 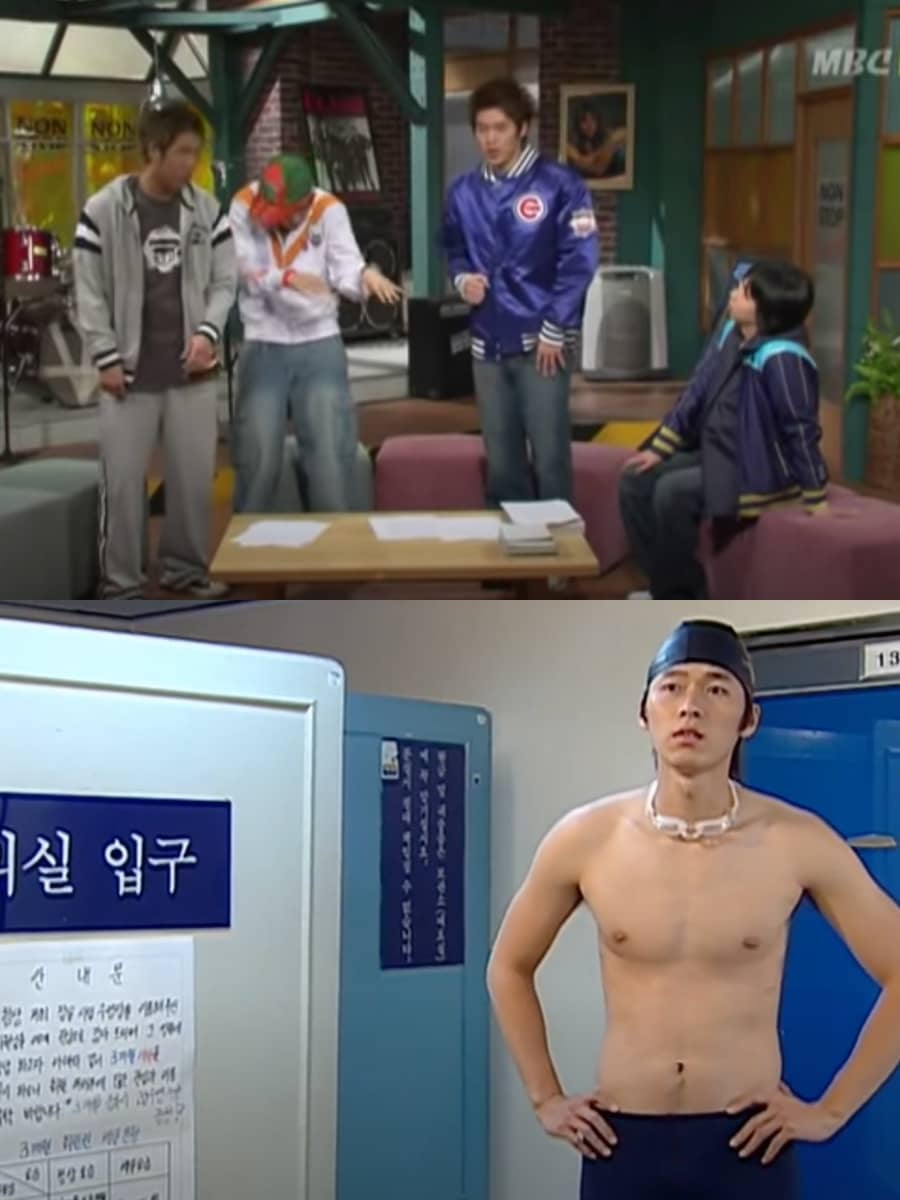 Hyun Bin appeared in Nonstop 4, where audiences got to see him in a variety of roles and even showcased his talent of rapping. 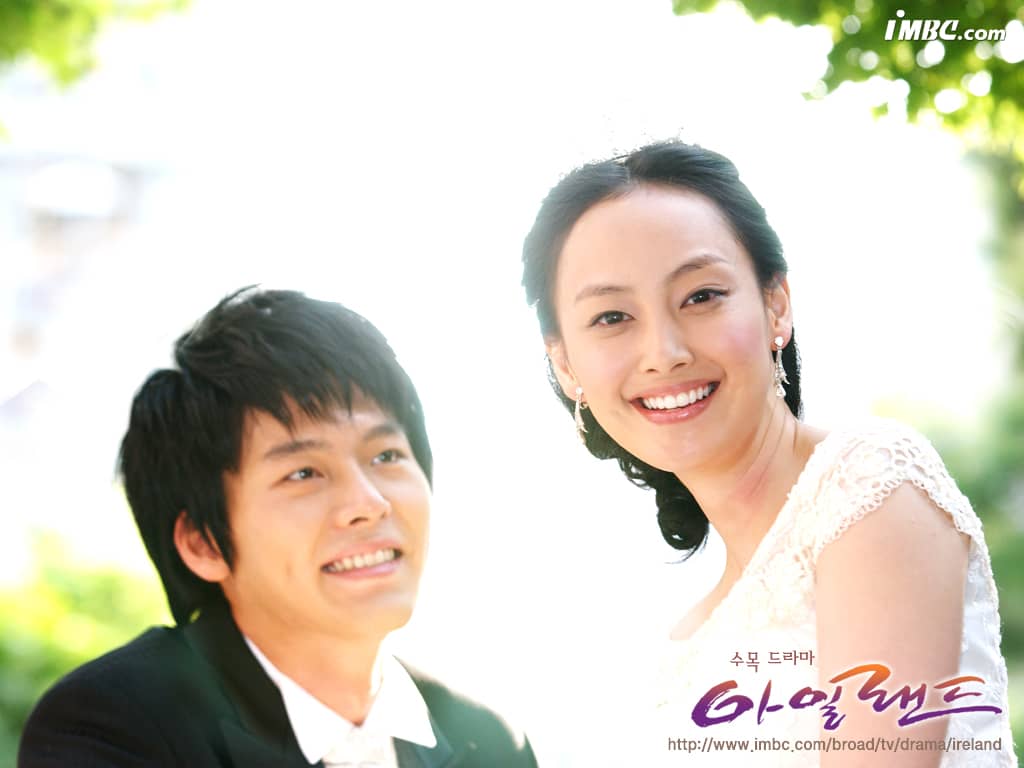 Directed by Kim Jin-Man and written by In Jung-Ok, Ireland is the story of Joong-A (Lee Na-Young) who is a westernized Irish adoptee. She flies back to Korea to confront her past and see her motherland, only to fall in love with her brother Jae-Bok (Kim Min-Jun). Their love is painful because they could not be together—with the show's message ultimately underlining that there is no such thing as noble innocent love and that love is adversity in itself. 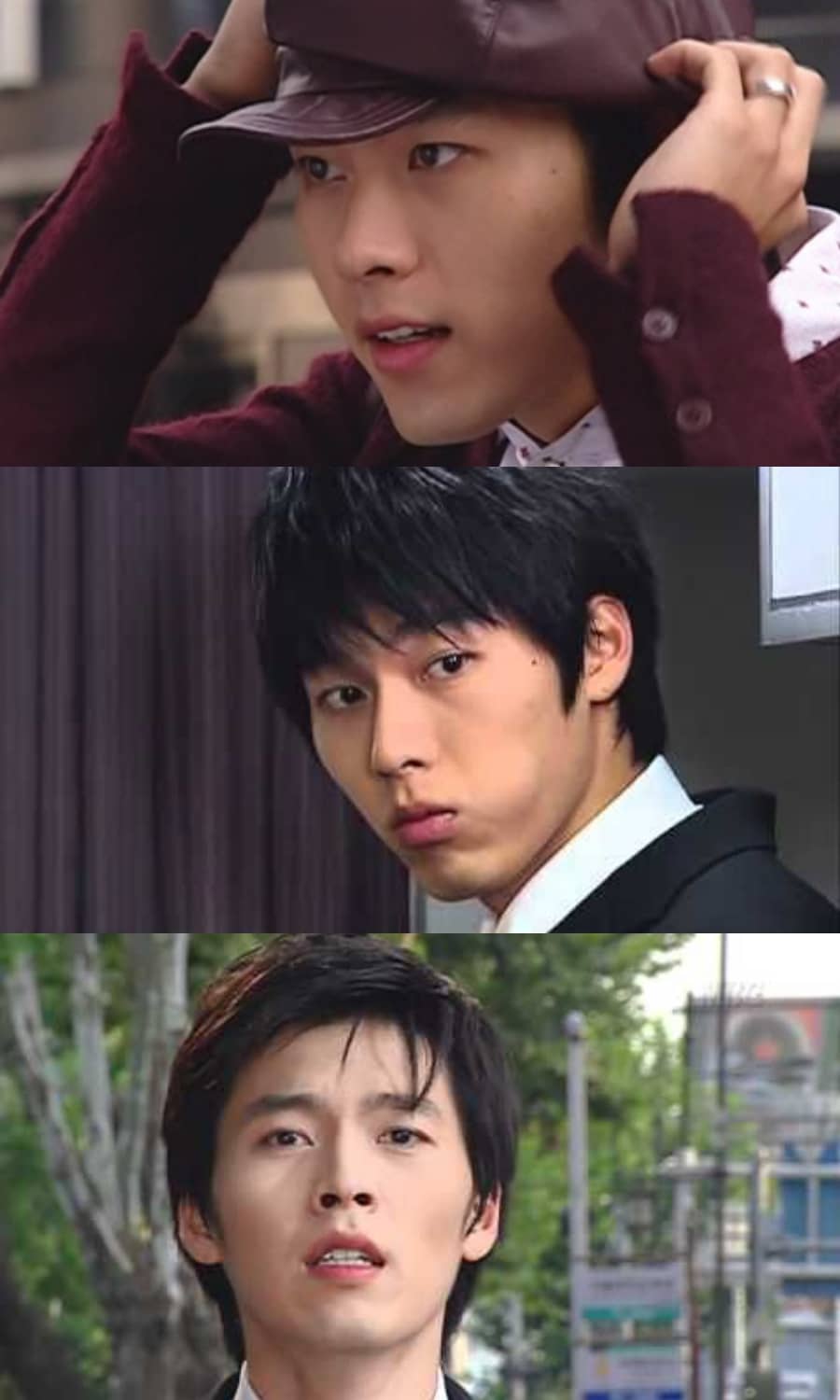 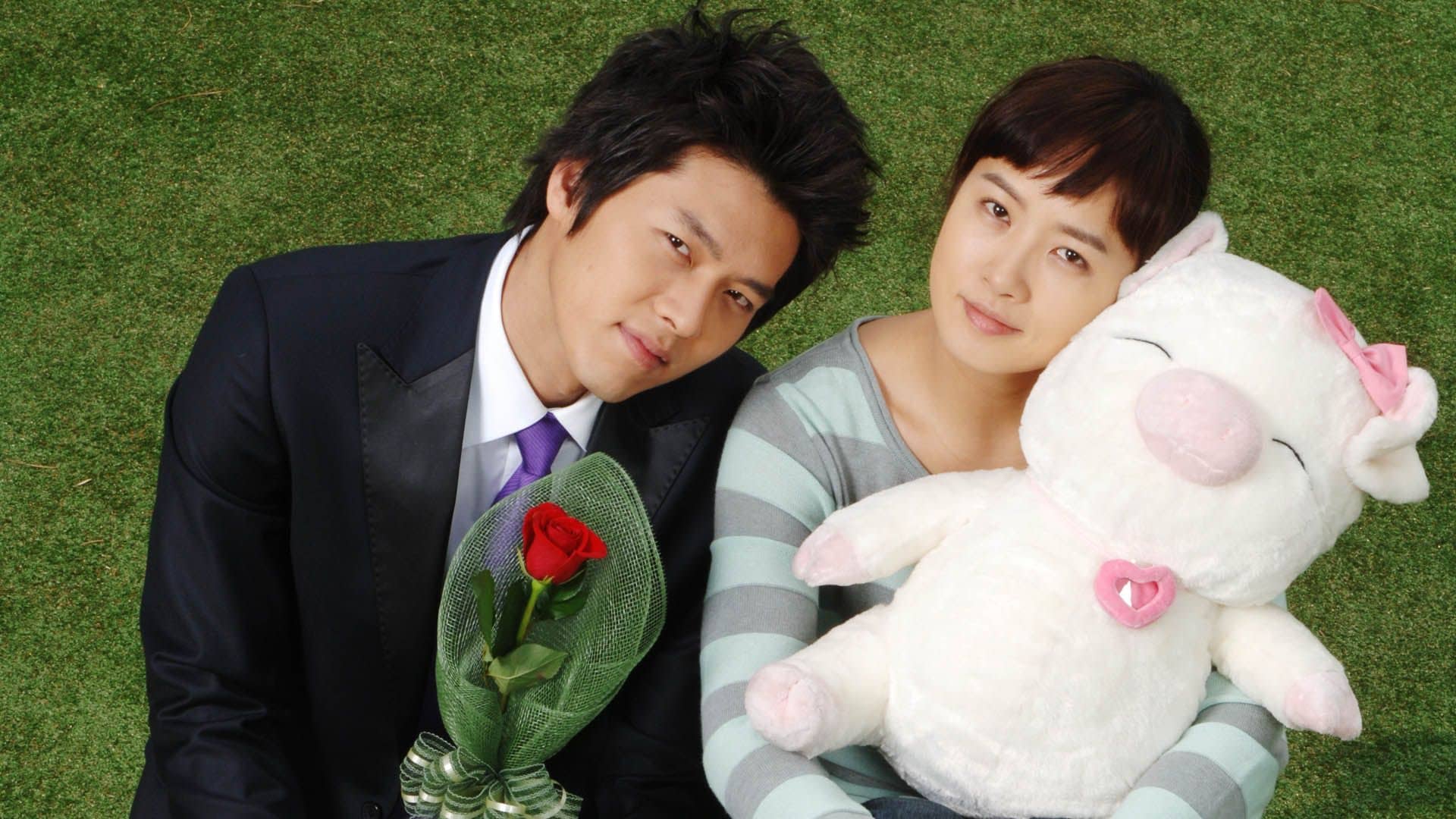 Touted as the Korean version of Bridget Jones's Diary, My Lovely Sam Soon is the story of a 29-year-old single woman who has an average life. SHe gained 7 kilos after a heartbreak, she didn't get to finish studies, she doesn't own her own apartment or car, she doesn't have a love life. And, even with a baker's license, she got fired from her job on Christmas Eve! 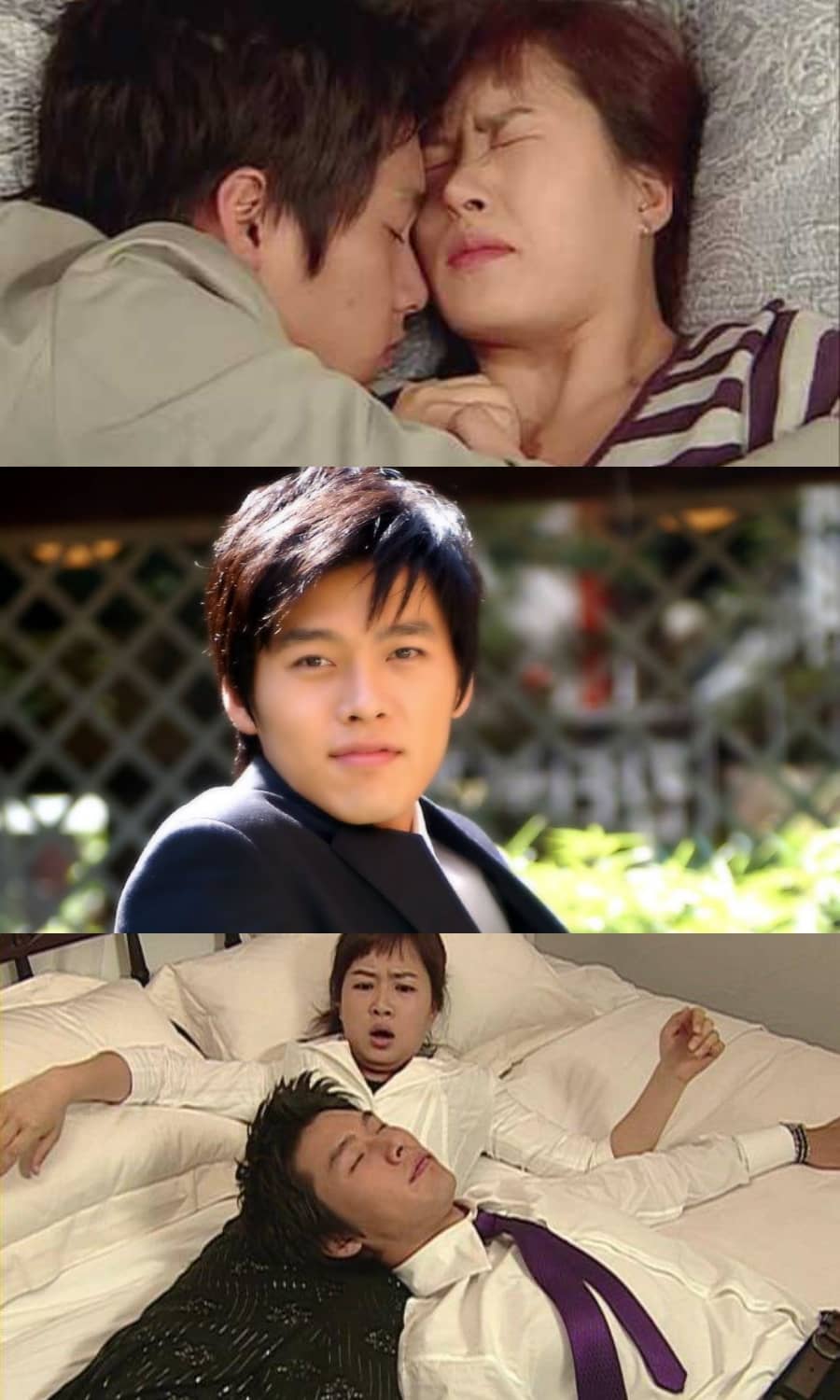 Hyun Bin plays Hyun Jin-heon, the owner of Bon Appetit—an upscale French restaurant—who recognizes her talent and hires her as his new pastry chef. After encountering different challenges in love and in life, they reconcile and decide to face the future together by doing their best at work and love, living their lives to the absolute fullest.

As the drama opens, we are introduced to a genius. At merely 17 years of age, Tae Woong (Hyun Bin) meets two people who will later become people he loves: Kim Jeong Kyu (Lee Sun Ho) and Bo Ra (Sung Yu-Ri). 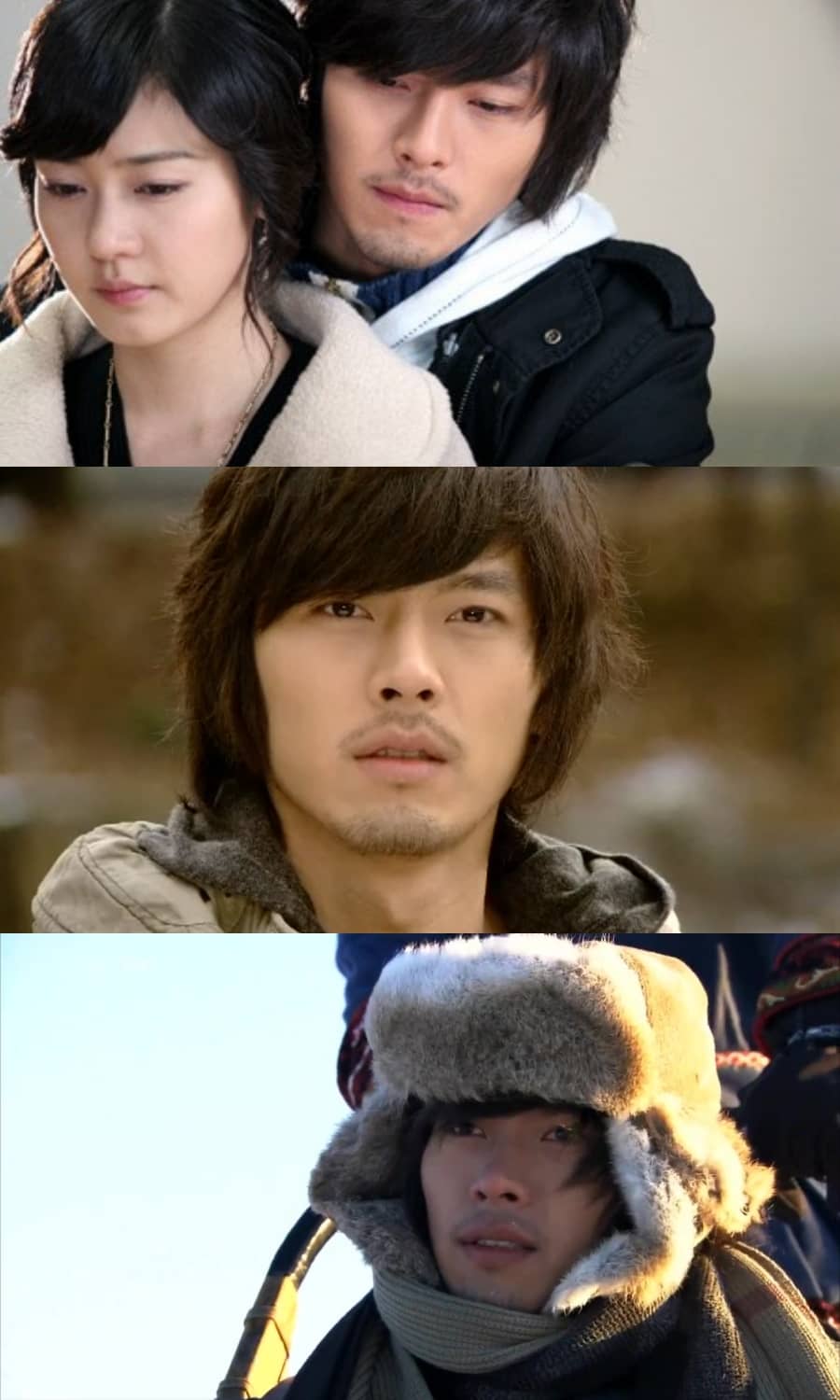 When Tae Woong and Jeong Kyu enter an international math Olympiad, life gets complicated as Tae Woong wins and Jeong Kyu commits suicide. The tragic event causes Tae Woong much grief through a course of 8 years until he meets Bo Ra again, the little girl he once knew. The tale continues into the world of the seemingly cold Bo Ra, as Tae Woong proves to be the only one capable of melting her heart. 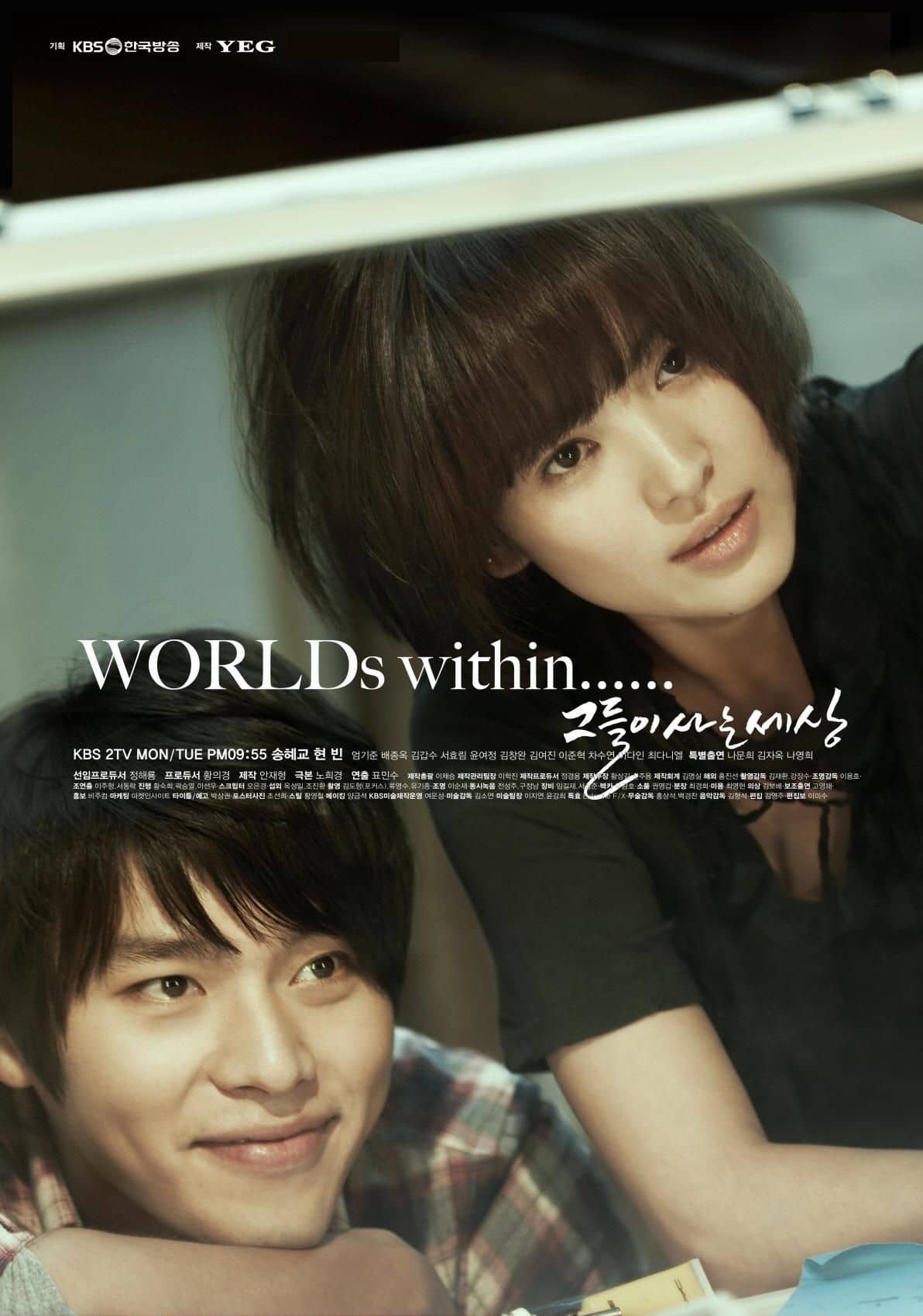 Directed by Pyo Min-Soo and Kim Kyu-Tae and written by No Hee-Kyung, Worlds Within... (also titled The World That They Live In) follows Jun-yeong Ju (Song Hye-kyo), a producer working her way in the male dominated world of drama creators. Co-star Hyun Bin, Jung Ji-Oh, is her mentor. 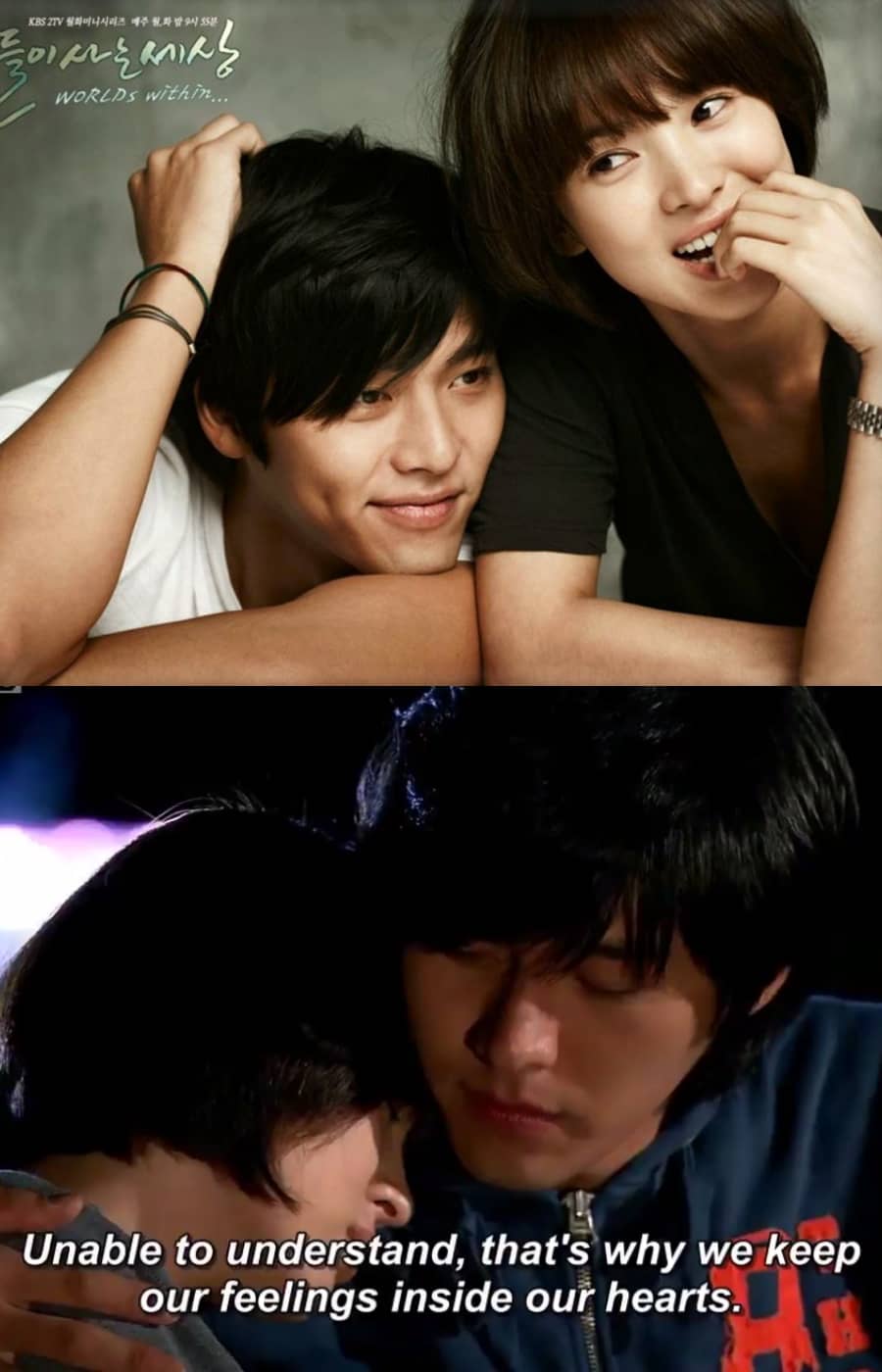 Ji-Oh initially makes her life miserable at first but later on softens and discovers his affection toward the hard-working and passionate newcomer.

Based on the 2001 film, Friend, Our Legend expands the story of Kwak Kyung-taek. His story is a rough-and-tumble tale about four friends who come of age in the tough streets of Busan in the 70s and 80s. 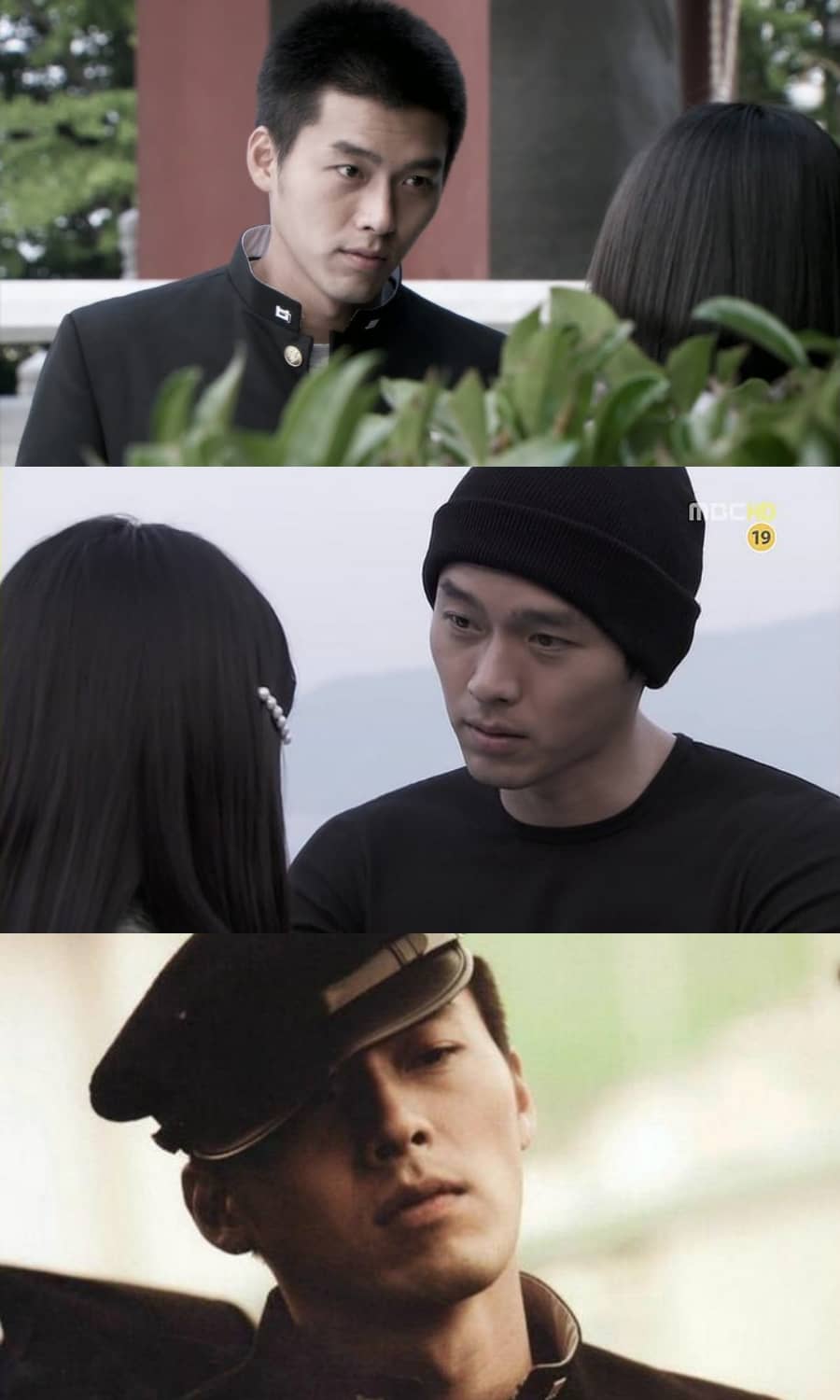 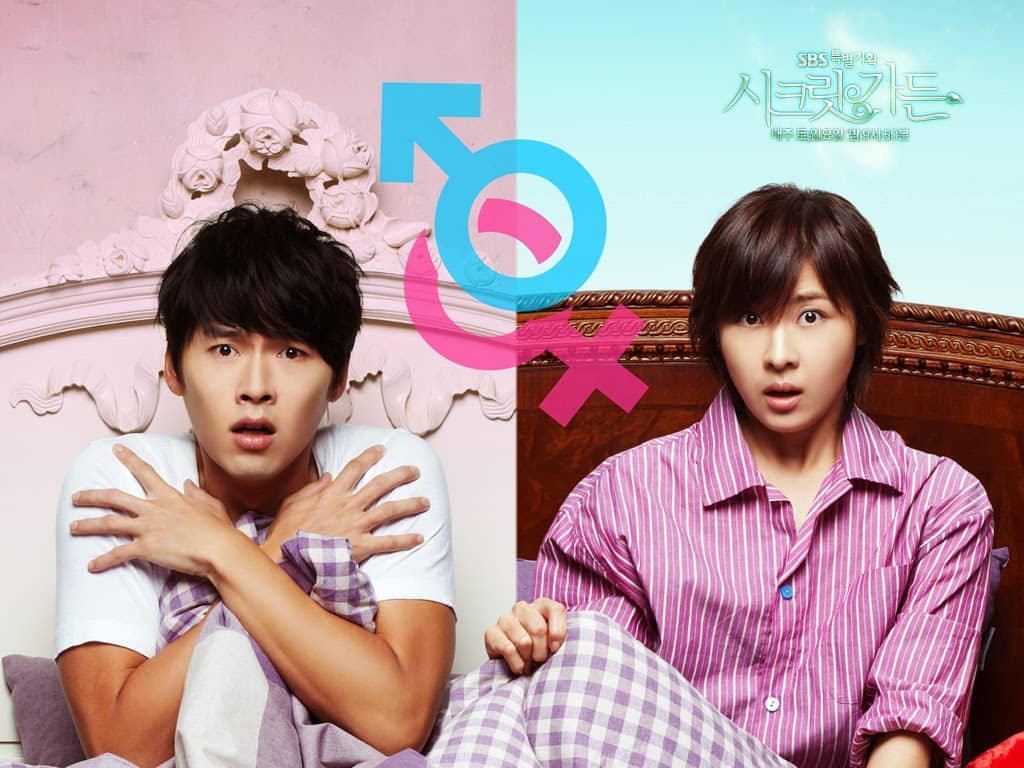 This hit K-drama tells the Cinderella story between Gil Ra-im (Ha Ji-won)—a clever and charming stuntwoman, and Kim Joo-won (Hyun Bin), a high-end department store CEO. In trying to work through a misunderstanding and resolving a scandal of his cousin, Oska (Yoon Sang-hyun), Ra-im and Joo-won meet and he is absolutely stunned by her cool demeanor. He doesn't understand why, after their encounter, Ra-im is always on his mind and he begins to pursue her. Though initially apprehensive to his advances, Ra-im gradually begins to reciprocate his feelings.

Their two very different worlds collide and Ra-im and Joo-won gradually learn about each other's worlds. Joo-won's mother, however, is against their love. Despite his mother's objections, they still marry. The story becomes more complicated as events go along and Ra-im and Joo-won magically start switching bodies which bring about very confusing feelings for them both.

Gu Seo-jin (Hyun Bin) is a third-generation chaebol who runs the theme park Wonder Land. In line to become the next CEO of Wonder Group, he has everything—looks, brains, and fortune—or does he? Seo-jin is diagnosed with dissociative identity disorder, causing him to have two very different personalities. Whenever his heart rate goes beyond 150, another personality emerges which is unlike his usual cold, cynical, and ruthless self. This personality is Robin—kind, gentle, and has a savior complex. His split personality emerged 15 years ago due to trauma. 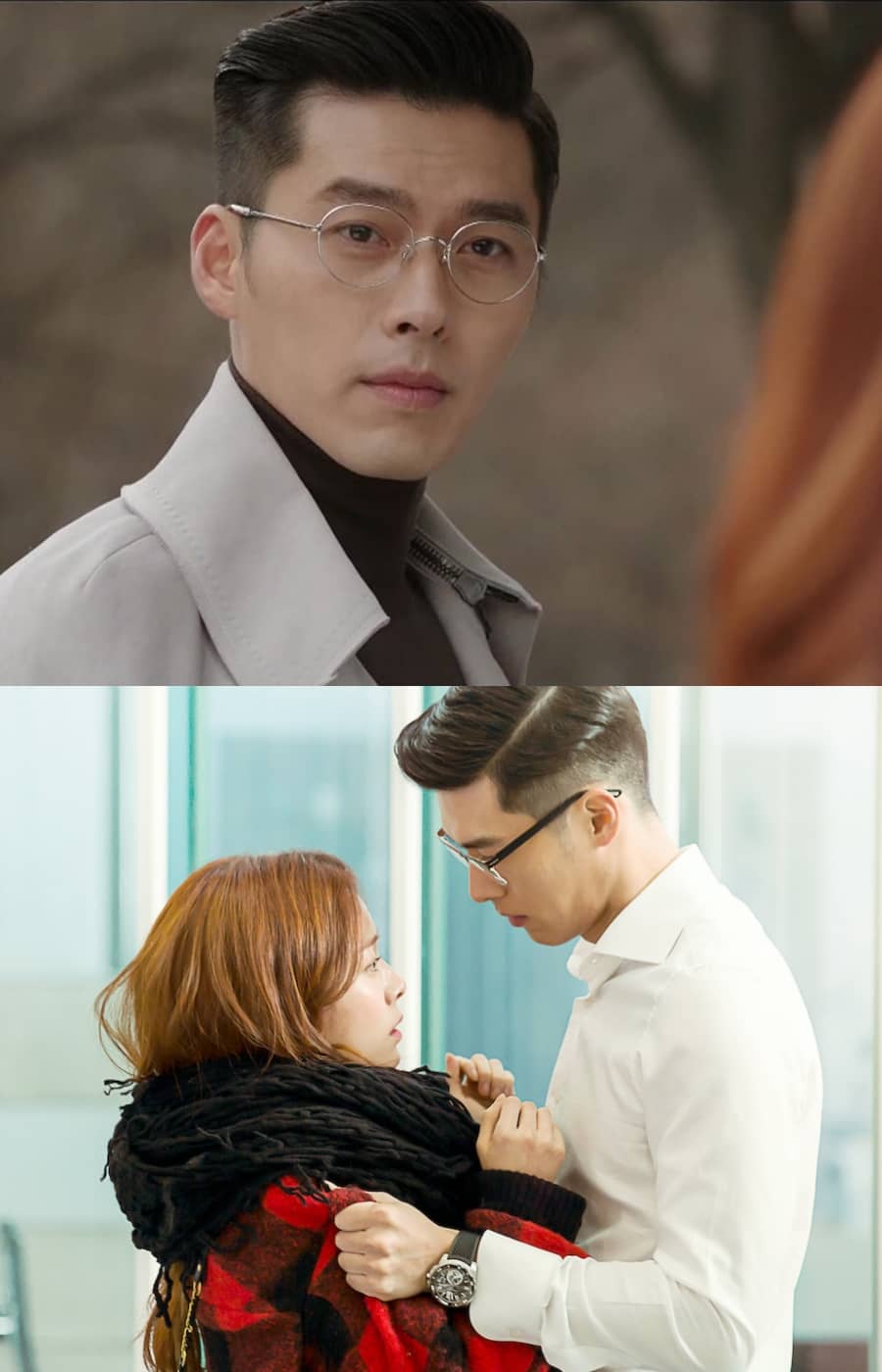 As the director of theme park Wonderland, Seo-jin meets Jang Ha-Na (Han Ji-Min) who works as the master and actress of a circus at Wonderland. Seo-Jin tries to kick the circus out of Wonderland and Jang Ha-Na reorganizes the circus to stay. In the process, Jang Ha-Na falls in love with Seo-Jin, and his split personality, Robin, appears more and more—causing her to fall even deeper in love with him. 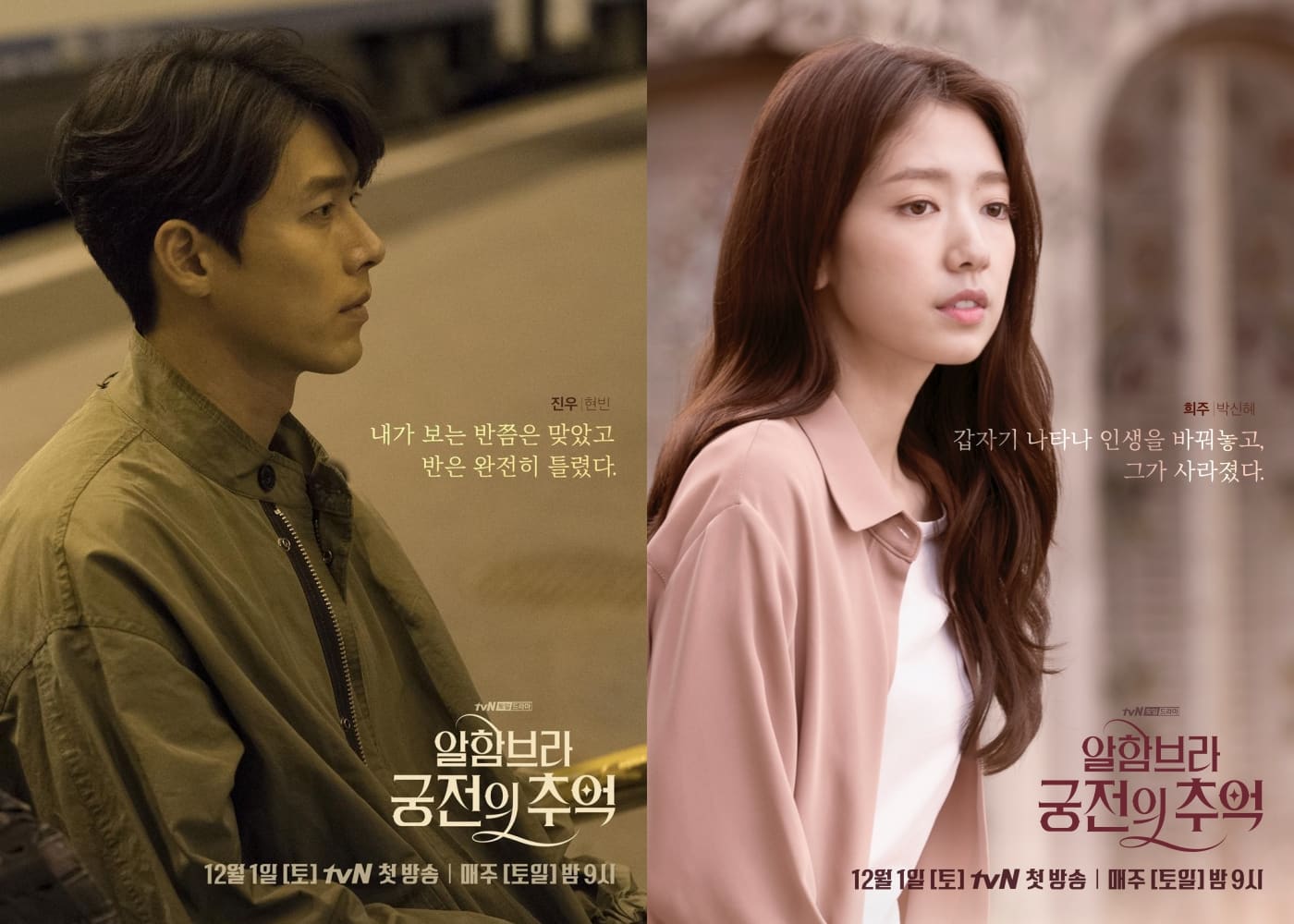 Hyun Bin plays Yoo Jin-Woo, the CEO of an investment company. He has good sense at his work, a strong adventurous spirit and a strong desire for winning. Yoo Jin-Woo is going through a hard time emotionally due to things such as betrayal from his friends. Jin-Woo visits Granada, Spain to meet the creator of the gae, Jung Se-joo (Park Chan-yeol) on business and stays at an old hostel run by former guitarist, Se-joo's sister, Jung Hee-Joo (Park Shin-Hye). There, he gets involved in a strange affair and the both of them get entangled in mysterious incidents as the border between the real world and the alternate reality world begins to blur. This global hit K-drama tells the story of two star-crossed lovers, Yoon Se-ri (Son Ye Jin) and Captain Ri Jeong-hyeok (Hyun Bin). They meet one day as Se-ri is caught in a sudden tornado that knocks her off course and lands her right into a tree in the forest in the demilitarized zone of North Korea. Reluctantly, Captain Ri helps Se-ri hide and finds ways to bring her back home, protecting her at all costs. Over time, they fall in love, despite coming from two very different worlds and the divide between their respective countries.

We have so much love for this multi-awarded actor who has genuinely stole our hearts with his talent, charm, and dashing good looks! From this list of dramas, which ones are your favorites? Let us know!