Extending Family: A Review Of 'After the Wedding'

A remake of a 2006 Danish film that was nominated for Best Foreign Language Film at the Oscars, ‘After the Wedding’ is a welcome drama that can be proud of three terrific lead performances

The cinema summer of blockbusters, live-action remakes, and superhero exploits is now officially over, as August comes around. And what better way for cinephiles to mark this welcome turnaround than with a drama that boasts two terrific actresses of their generation, Julianne Moore and Michelle Williams. Throw in Billy Crudup as the male lead, and you know you’re in for a dramatic outing that’s got strong potential stamped all over it. Sony Pictures Classics
After the Wedding is a remake of a 2006 Danish film that was directed and co-written by Susanne Bier, and started Mads Mikkelsen—it was one of the films that helped establish Mikkelsen, and had Hollywood knocking on his door (although they still don’t seem to know how to use him—look at how he was wasted in Doctor Strange). Evidently, Julianne Moore and husband Bart Freundlich loved the film and optioned it, created some gender reversals to the story, and gave it a “fresh” New York setting. Now written for the screen and directed by Freundlich, it was shown at Sundance earlier this year.

When the film opens, we meet Isabel (Michelle Williams), who seems to have devoted her life working at a run-down Calcutta slum orphanage. When news of a possible benefactor from New York comes in, she’s dispatched to try and secure the much needed funds. There, she’s hosted by Theresa (Julianne Moore), CEO of one of the top media agencies, who happens to be in the midst of preparations for her daughter’s wedding that weekend.

It’s at this wedding, and the aftermath, that long held family secrets, revelations, suspicions about motive and intent—all bubble to the surface, with Theresa’s husband, artist Oscar (Billy Crudup), very much in the center of the emotional maelstrom that spares no one. 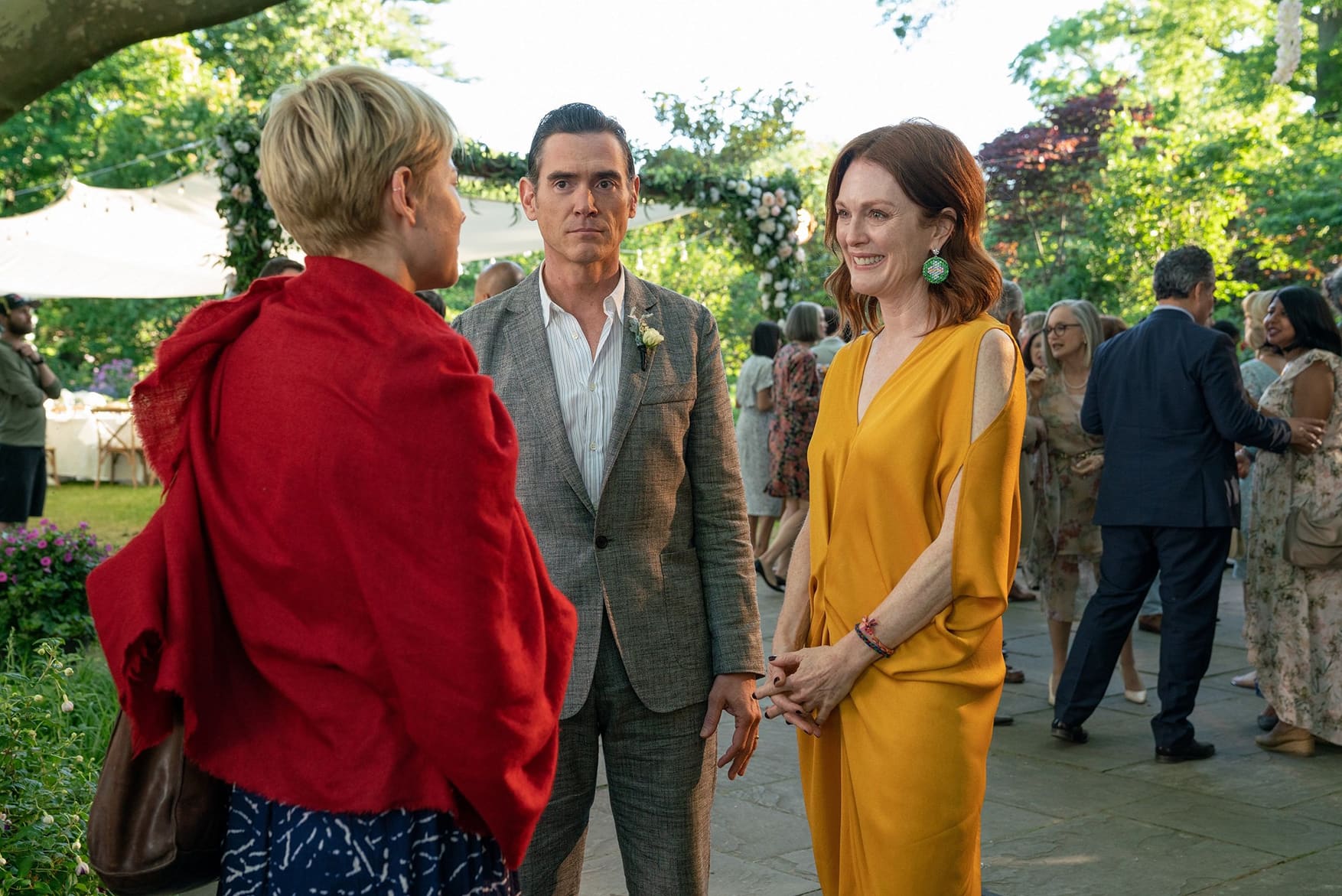 What’s impressive is how with each twist and turn, each reveal, the film forces us to reassess our feelings towards the three main characters. If we’ve emotionally invested in them, it’s a continuous pulling of the rug out from under our feet. And thankfully, Moore, Williams, and Crudup are up to the task of making their respective characters sympathetic and real. Also impressive is Abby Quinn as the daughter, Grace, whose wedding creates such an impact on the lives of all our main protagonists.

If you’ve seen the 2006 Danish film though, you’ll bewail the fact that this is pretty much a note for note remake in terms of plot development. In fact, some would say that having the person working in Calcutta be portrayed by a man makes the events that follow more plausible; and this may be one case where switching gender, and turning the film into a showcase for strong female acting may not have truly worked.

On the other hand, if you’ve never seen the original, be prepared to be drawn into the story and the superb acting of the two female leads. They go through the arcs of their respective characters with consummate skill. Some plot twists do veer into teleserye territory; but trust me, we surrender to these two actresses, and are happy to be taken along on this dramatic ride.

After The Wedding will be in theaters on August 14.

The Philippine Readers and Writers Festival Is Going Online This Year