Clocking in at over an hour per episode, it’s easy to lose one’s self in the megahit Korean TV series "Crash Landing On You" not only because of the engaging storyline but also because of its amazing scenes

Picturesque backdrops, heart-stopping or even heart-fluttering scenes and a whole lot of drama, romance and action packed in each episode of Crash Landing on You (CLOY), led by Korean superstars Hyun Bin and Son Ye-jin, will make you forget that you’re watching a TV show. The production of every episode is done with utmost creative care that it felt like watching a blockbuster movie each time. Even the show’s OST (original soundtrack) and musical scoring heightened and amplified the emotional ride throughout the series. It’s quite a feast for the senses!

There are so many exquisite and aesthetically dazzling scenes in Crash Landing On You that are of cinematic quality, making it a daunting task to break down the most beautiful ones. But don’t fret! Metro.Style took the challenge and dutifully listed down the top scenes that are simply breathtaking and stunning, undoubtedly making the show one of the most-watched series in and out of Korea.

Let’s beautifully reminisce and swoon together over these Top Ten hauntingly beautiful Crash Landing on You scenes.

Paragliding accident that led Yoon Se-ri (Son Ye-jin) to Ri Jeong-hyeok (Hyun Bin). The pilot episode did not hold back as it showcased the breathtaking Korean mountainside and the visual effects of life-threatening fierce winds that knocked out Yoon Se-ri and brought her to North Korea and into Ri Jeong-hyeok’s life.

Innocent encounters in Switzerland. Remember those mini-flashbacks of how Se-ri and Jeong-hyeok had a series of innocent encounters and missed opportunities in Switzerland before the paragliding accident in North Korea happened? There were just too many cinematic moments: from Se-ri being pensive on the boat in the beautiful lake of Iseltwald, Se-ri chancing upon Jeong-hyeok playing the piano on the dock, to Jeong-hyeok seeing her on the panorama bridge in Sigriswil and asking her to take a photo with the Swiss Alps in the background. 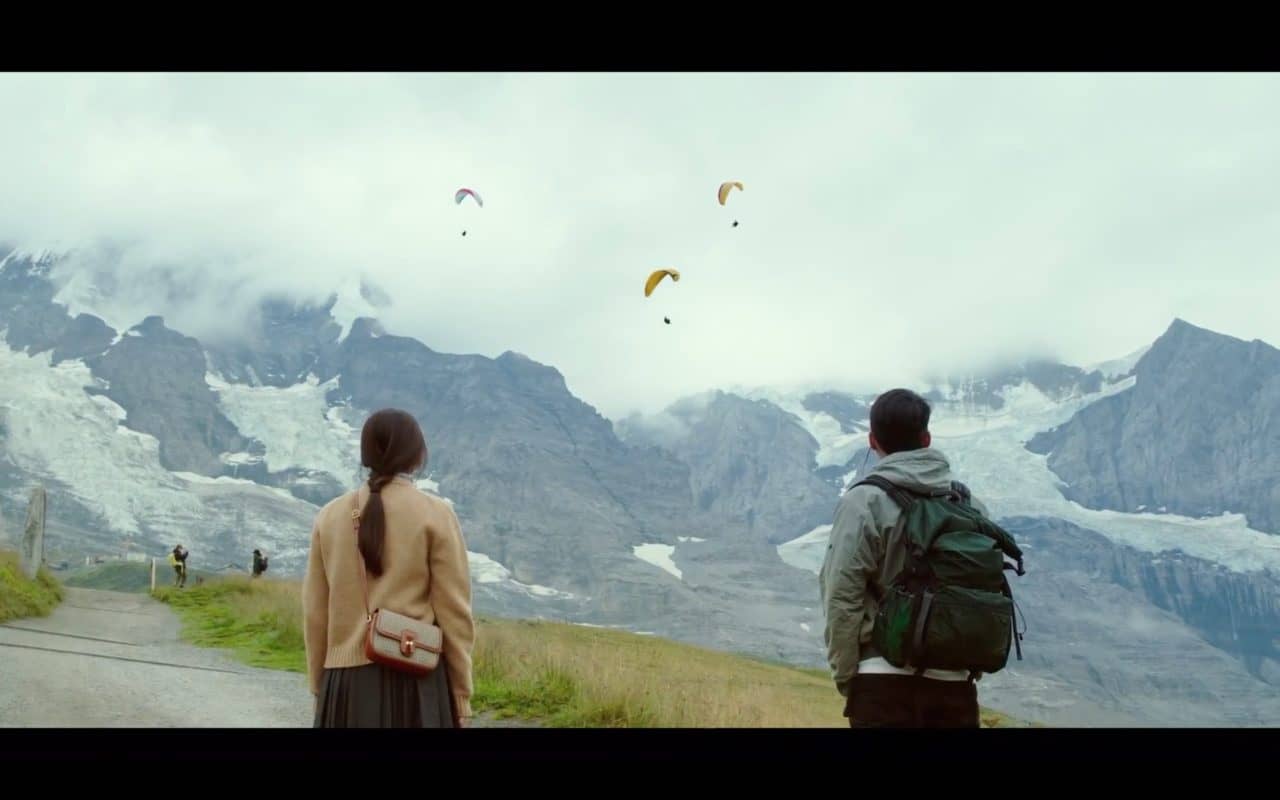 A candle in the crowd. Se-ri frighteningly lost her way at a dark small-town market in North Korea when Jeong-hyeok, remembering her love of scented candles, showed up and held up a lighted candle in the crowd to serve as a guide for her. Thankfully, she saw it and they found each other. It was quite a poetic scene showing the unexpected bond between the pair.

Leap of faith with Se-ri. Frustrated that she couldn’t immediately go back to South Korea, Se-ri abruptly left Jeong-hyeok’s place to paraglide her way back but he saw her just in time to reason with her and promptly paraglided with her to make sure she’s safe. It was a breathtaking scene from the moment they saw the enemy’s trucks approaching and bravely deciding to leap from the mountain. 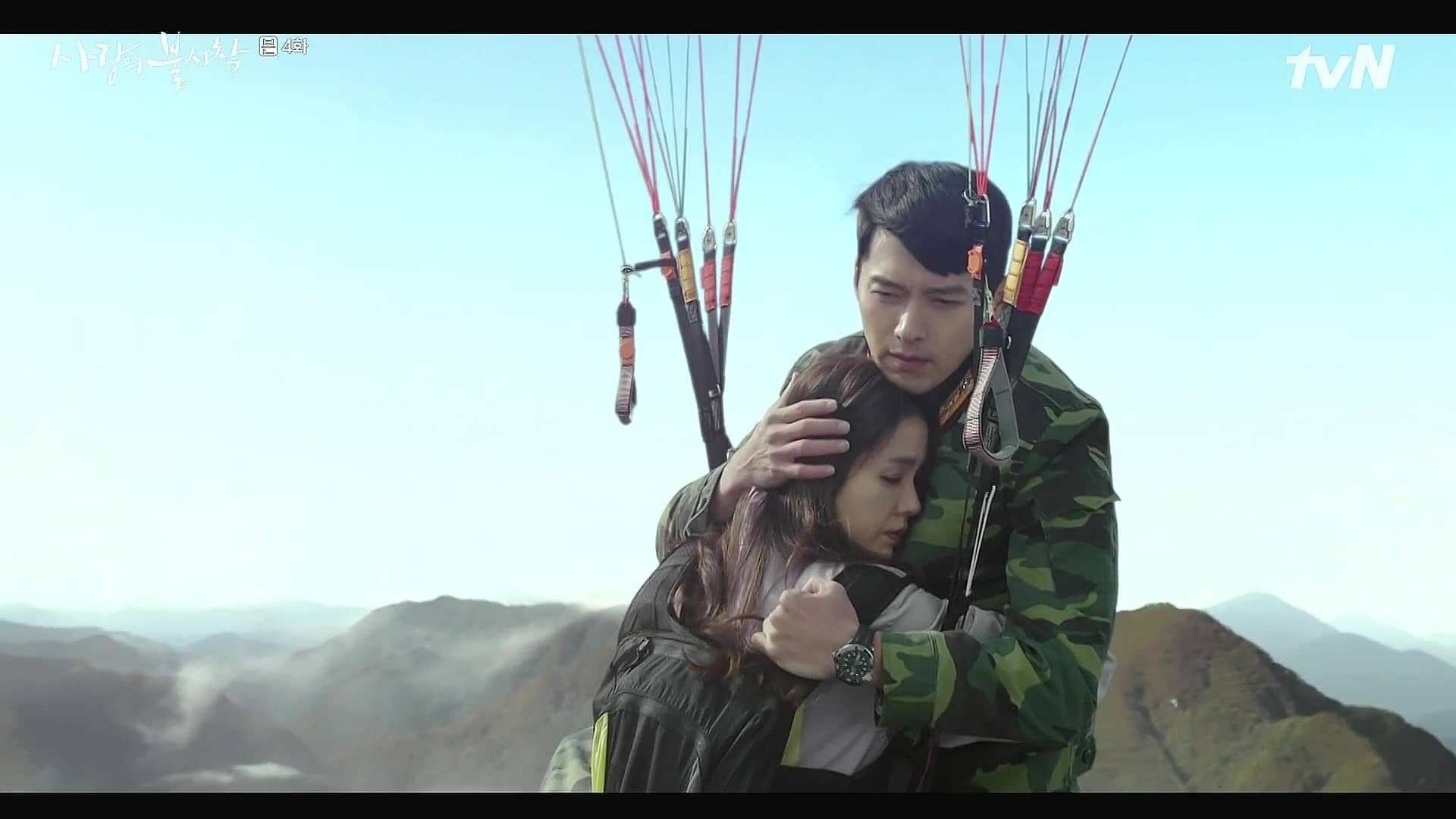 Bonding over bonfire. On their way to Pyongyang, Se-ri and Jeong-hyeok’s train broke down and were forced to camp outside. Viewers were treated on a panoramic view of the fields of Mongolia (cosplaying as North Korea) as the main couple romantically bonded over bonfire through the night. Jeong-hyeok rescues Se-ri en route to airport. Straight out of an action movie, the show sent us on a rollercoaster ride when we all thought Se-ri can successfully fly out but then it turned out she was being tailed by the enemies and Jeong-hyeok had been riding a motorcycle to closely watch over her. It led to a jaw-dropping moment where Capt. Ri took the bullet in his attempt to protect Se-ri.

Metro Editors React To The "Crash Landing On You" Finale

Jeong-hyeok and Jo Cheol-kang's (Oh Man-seok) Seoul fight scene. Apart from the romance aspect of the series, the thrilling action scenes also deserve a spotlight. The nail-biting confrontation scene and gunfight between Jeong-hyeok and Jo Cheol-kang gave us three defining moments: the threatening yet suave arrival of Jeong-hyeok’s North Korean military buddies on the scene, Se-ri getting shot by Cheol-kang and Capt. Ri in tears finally saying “I love you” to Se-ri.

Defying borders. There were two times that the star-crossed lovers defied the borders between North and South Korea: first was when Ri Jeong Hyeok sent off Se-ri to South Korea and bravely made a step across the border to give a goodbye kiss. Second was during the epic finale when Se-ri showed up just when Ri Jeong Hyeok was handed over to North Korean authorities at the Military Demarcation Line. Picture the collective gasp of the viewers when Ri Jeong Hyeok heartbreakingly broke away from the North Korean forces so he could face and meet the sobbing Se-ri halfway as both the North and South Koreans took out their guns. It was one of the emotional highlights of the series.

Gu Seong-joon (Kim Jung-hyun) sacrifices his life for Seo Dan (Seo Ji-hye). Just as the main couple of the series struggled, the secondary leads were dealing with their own drama and their share of action. In a major turn of events, Seong-joon opted to ditch his plans of flying out of North Korea and rescued the love of his life Seo Dan from the hands of armed goons. The series delivered a tearjerking scene when Seong-joon fought off the armed men and eventually died knowing that Dan loves him back and that someone will actually mourn his passing.

15 Reasons Why K-Dramas Are Extremely Addictive

Reunited in Switzerland. If you can’t have a happy ending in neither North or South Korea, then why not have it in the place that started it all? Yoon Se-ri and Ri Jeong-hyeok celebrated their long-awaited reunion and happy ending in scenic Switzerland amid the majestic backdrop of the Swiss Alps and green fields as we all cried tears of joy on how beautiful everything is—the triumphant love, the twists and turns of the story, the romantic scenery and the high quality production of it all. 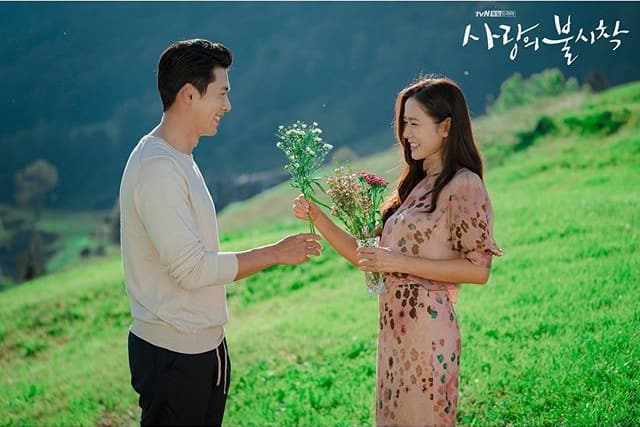 Kim Soo-hyun cameo. Korean superstar Kim Soo-hyun reprised his role as a North Korean spy from the box-office hit Secretly, Greatly and appeared in a cameo to the delight of Korean movie enthusiasts.

Parasite fever on CLOY. It was the Parasite-Crash Landing on You crossover we never thought we needed. The Oscar-winning film Parasite’s Jang Hye-jin and Park Myung-hoon are the North Korean siblings we love who played Seo Dan’s mom and uncle respectively.

If you haven’t boarded the CLOY train yet, now is the perfect time to get on it while arming yourself with this essential list of memorable scenes. Crash Landing on You, starring Hyun Bin and Son Ye-jin, is available for streaming on Netflix.

The 7 Sexiest K-Actors In Their Hot Military Uniforms