The Has Been & The Never Was: A Review Of 'Once Upon A Time In Hollywood'

An extravagant period fairytale, Tarantino’s penultimate 9th feature film is his most personal love letter to Holly-weird; as only he could write it, in full 1969 splendor and with an overdose of foot fetish

Once Upon A Time In Hollywood is Tarantino at his most inspiring, and his most frustrating. This alternative Hollywood history conceit is Quentin giving us his most personal film to date. In it, he’s crammed all the geeky obsessions and motifs that have fueled his storied and controversial film career. If, as he’s pronounced in the past, he’s only going to make 10 films, this would count as his ninth; and it shows a newfound maturity and more reflective nature—so I’m still hoping he’ll change his mind.

The film basically revolves around two narratives—that strangely enough, only intersect at the very end of the film. There’s a narrative that follows Rick Dalton (Leonardo DiCaprio) as a former cowboy TV star who’s now down on his luck, reduced to playing villain roles. His omnipresent shadow is his stunt double Cliff Booth (Brad Pitt), a shady kind of character, who may or may not have murdered his wife in a boating accident. They’re both looking for work, just that Dalton has more to lose and is more desperate, while Booth seems readier to just “go with the flow.” 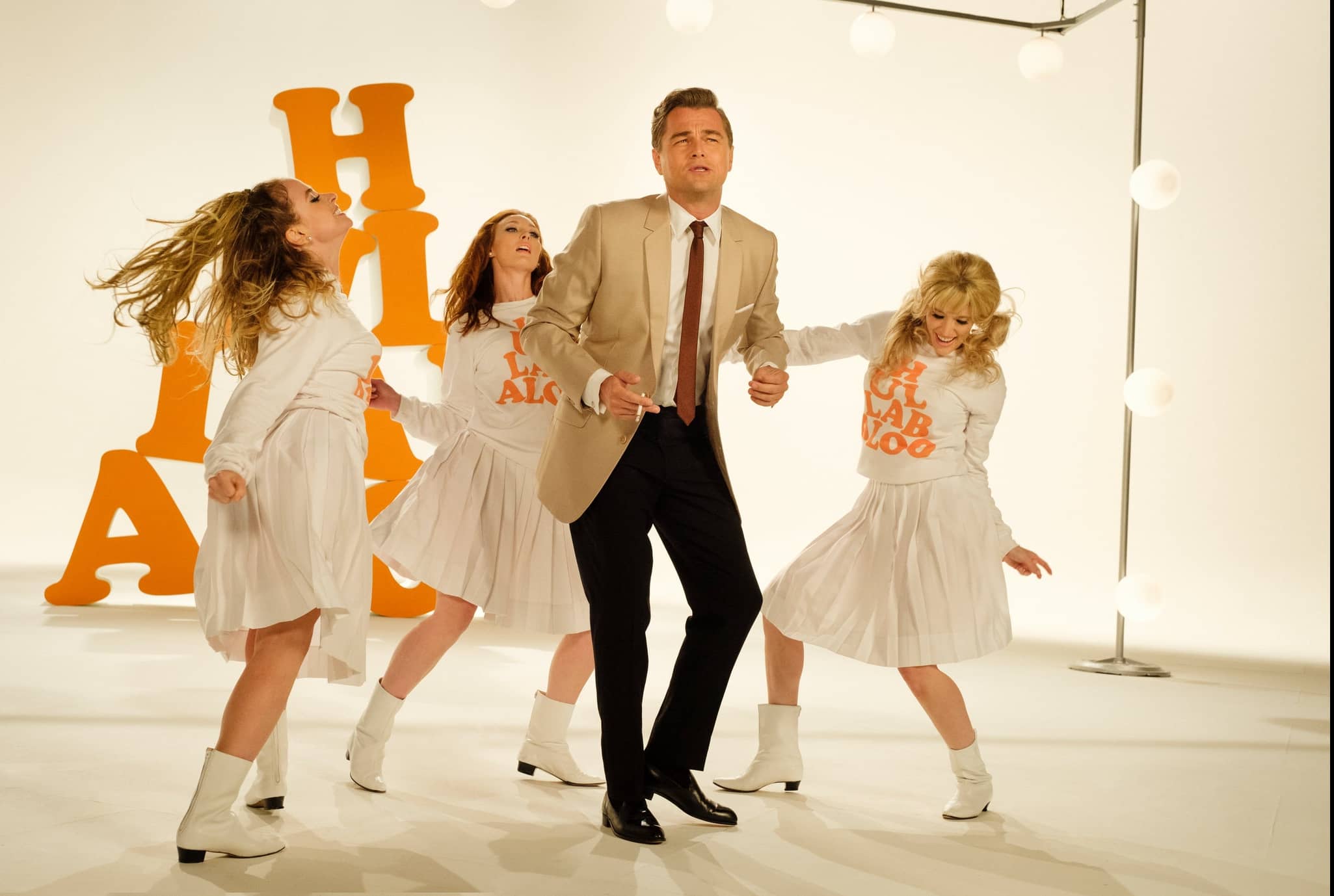 The second narrative has real historical person and Cielo Drive Dalton neighbor Sharon Tate (Margot Robbie) doing the whole Hollywood scene of parties at the Playboy mansion, married to Roman Polanski, and going about her thing in the summer of 1969. It’s August 1969, and the Manson gang has taken over the Spahn Movie Ranch. So there’s a strong sense of pregnant foreboding (and yes, Sharon is pregnant as well), as we know very well what happened that summer.

Tarantino goes the extra geek mile in recreating this 1969 timeline, and it results in a turgid first thirty minutes of the director showing off his attention to detail. Impressive, but we’re getting impatient for the story to throw off sparks. Thankfully, it eventually does so, and some of the scenes in the middle portion, and the throwaway lines in the dialogue, may stand among his best. The buddy movie narrative of Dalton and Booth is at one point described as “More than a buddy, less than a wife”—precious! 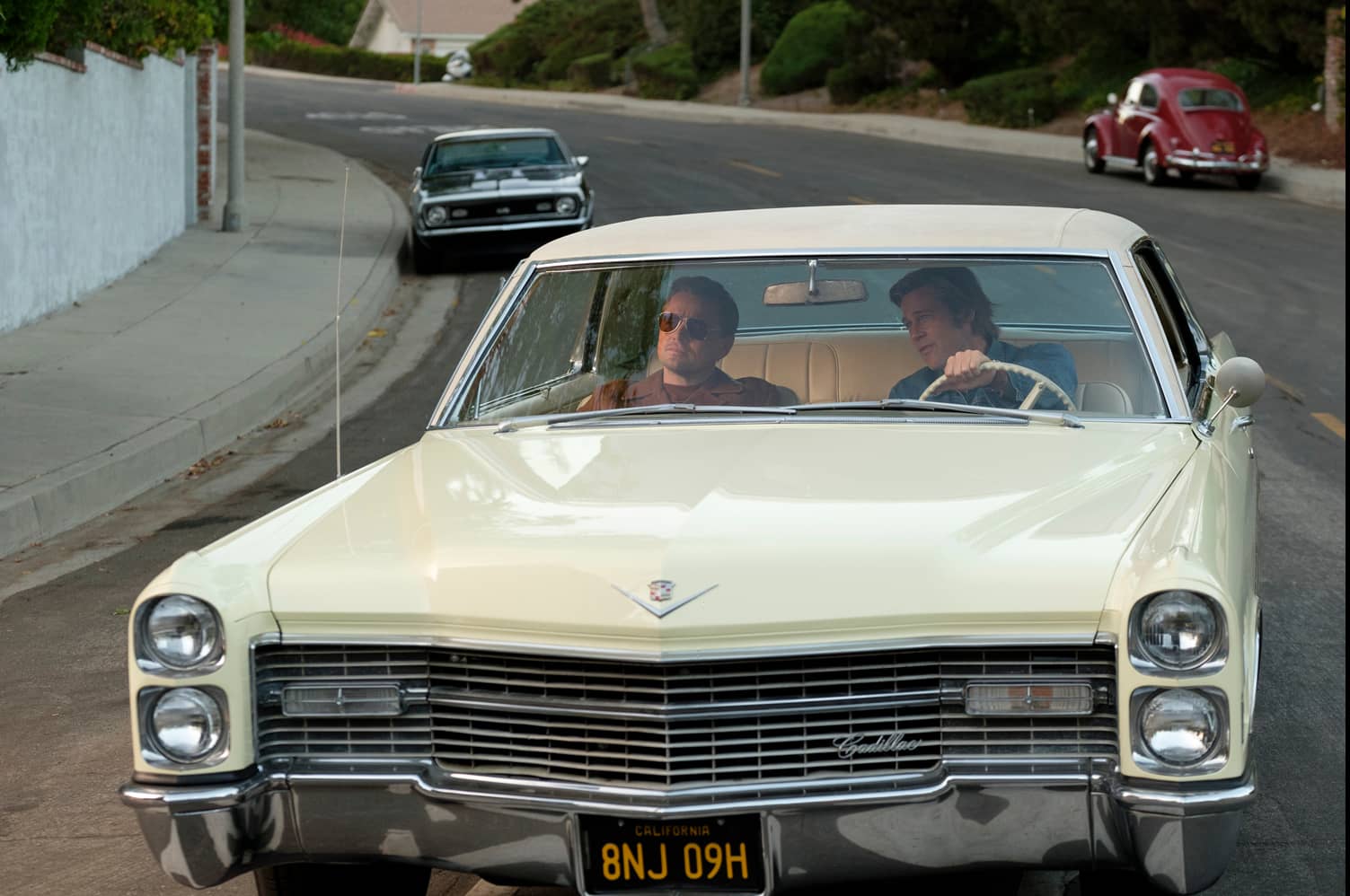 Leo and Brad as Dalton and Booth | Sony Pictures

There’s one glorious scene of Tate conniving to get into a movie theater for free on account of the film showing is The Wrecking Crew, where she plays a role. With her dirty bare feet raised on the seat in front of her, Robbie’s face as she delights in how the audience reacts to her scenes in the film is magical. And you’ll love Dalton confronting a child actress who’s method all the way, and how he nails the final scene where he’s the heavy, and earns her unsolicited admiration. As mentioned above, all of Tarantino’s lifelong obsessions rear their collective heads in this film. Spaghetti Westerns, martial arts films, the Grindhouse and Splatter genres,  his devotion to 1960’s television and radio, World War II film treatments, foot fetishes, and more—they’re all elements in this personal paean to the Hollywood he grew up to and absorbed.

What is also noted though is his unique take in this film of white men as victims, and that if not for Robbie rising above the scenes and dialogue given her, the women are all stereotypes. It’s almost as if Quentin has used 1969 to tell us what he thinks of the #MeToo Hollywood environment of today. There’s so much going on in this Hollywood love letter that you wonder why he couldn’t make the action snappier, and made the movie greater than the sum of its parts.

Behind the scenes: Tarantino directing Brad and Leo | Sony Pictures

As for the alternative history, revisionist elements of the film, I would defend Tarantino by saying that’s precisely why it’s been given the fairytale-ish Once Upon a Time title. This is Tarantino asking, “What if this were true and how it happened?” It’s his wishing upon a Hollywood star. It won’t change facts or history, but it’s his little dream coming true on screen. And it reflects on my review’s title—while it could refer to Dalton and Booth, it also describes Tarantino’s Hollywood and his dream.

Once Upon a Time in Hollywood will be in theaters nationwide on August 28.

From The Land Of Milk & Money: A Review Of 'The Fast And The Furious: Hobbs & Shaw'

Siargao Is Not Just For Surfers, Here's What You Need to Know For An Epic Experience