Famous As The Men Who Wore Them: Iconic Men And Their Legendary Watches

What does it take to be an icon these days? Collabs? A killer Instagram? Every generation has its measure of fame, and today’s metric comes from the number of people that follow you in the digital space.

But back when social media wasn’t in its prime (or didn’t even exist at all), fame wasn’t accessible over the phone. Back then, before you would have heard of someone, they would have had to make it the old fashioned way: By doing something so extraordinary that they make it into the world news.

Just as people have made history doing extraordinary things, so too have some watches. The world of horology is full of stories like these. Watches that became part of pop culture, went to the moon, explored the deepest point of the earth, or were worn by characters in movies: The kind of stuff that mattered to a lot of people. And while they were definitely carried to fame by the people who wore them, sometimes, the stories behind the watches themselves are just as iconic.

By the time Elvis passed away, he’d become a cultural icon, influencing film, style, and music (he’s estimated to have sold over a billion records to date.) And for a long while, rumors persisted that he was still alive and had faked his own death. Chalk it up to the man’s charisma, but one thing is clear: the spirit of Elvis (and countless impersonators) remains alive today. And it’s also true of the watches he wore—particularly the Hamilton Ventura. 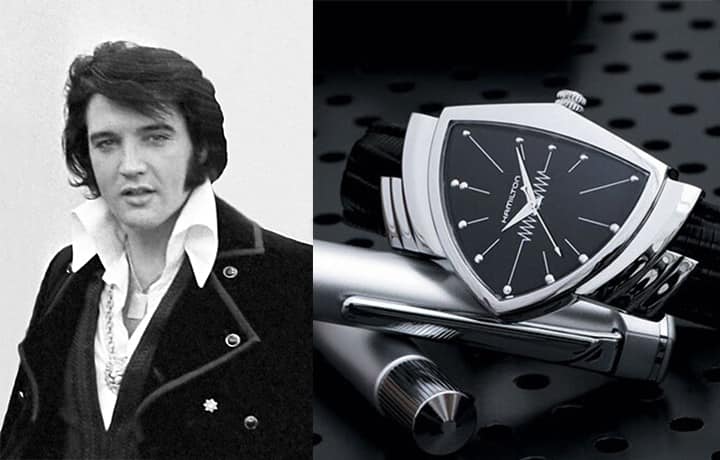 Elvis owned many watches during his lifetime, though the Hamilton Ventura has a special place in that collection. Today the Ventura, such as the one pictured here, is a staple in the Hamilton range.

Now, The King was always a forward looking man. We might think of Elvis today and lump him in with the oldies section on Spotify: The kind of music that your dad used to put on the radio on Sunday afternoons. But for his time, Elvis was a pioneer, and so was the Ventura. It was the first commercially available battery-powered watch—made before the quartz movement was even invented. It was a vision of a future that the people of the 1950s had imagined.

One look at the Ventura and you know it’s from the 50s, the curving lines clearly inspired by the mid-century modern movement that was popular in the era. You’d think the distinctive shape wouldn’t look out of place in a car from that time. And you’d be right. Richard Arbib—the designer of the Ventura—also designed the Packard Pan-American, among other concept cars that looked like they were from The Jetsons cartoons.

Still, no doubt it was due to Elvis that the Ventura gained its enduring popularity. The rockabilly king wore it in the 1961 movie Blue Hawaii, which kind of got middling reviews, but people watched it because of Elvis anyway. The reviews for the Ventura were a bit more favorable, and even after the film was over, Elvis chose to wear it, reportedly giving Venturas to his friends as gifts.

Though Hamilton stopped its production after a few years, it would surface again several times in the decades that followed. Today, it’s become a staple in the Hamilton range, with many different versions, including commemorative models inspired by Elvis.

1969 was a memorable year for many reasons. David Bowie was on the radio, John Lennon and Yoko Ono were making headlines, and it was the year that NASA sent the Apollo 11 astronauts to the moon. It was a collective milestone for the world, one that made a quote from Neil Armstrong famous around the world. The one that goes: “That’s one small step for man, one giant leap for mankind.”

And the Omega Speedmaster came along for the ride. A few years before the mission, the Speedmaster became the official watch of the NASA astronauts. Out of all the watches that were considered, it was the one that was rated the most likely to survive and remain accurate in space. Even now, it’s still known as the moon watch, because it was part of that historic journey. But it wasn’t Neil Armstrong who brought the Speedmaster to the moon. His watch never even made it to the surface. He had left it behind in the lunar module because the vehicle’s timer had broken down and he chose use the watch as a backup. But Neil’s pilot—Buzz Aldrin—was wearing his, and you can even see it in the photos of the lunar journey. The Speedmaster spent hours on the moon, strapped to his wrist, before finally heading back to Earth.

While Armstrong might have set foot on the moon first, it was Aldrin who actually wore the Omega during the moon walk. And so, to this day, the Speedmaster is famously associated with him and the flight to the moon.

These Pieces Add Oomph To A Blah Workwear Wardrobe

When you think of James Cameron, you think of the movie Titanic (also Avatar, but mostly Titanic.) The filmmaker’s story about doomed love in a doomed ship over a doomed sea was one of the biggest box-office hits of all time (well, also Avatar, but you get the idea.). Still, there was another seafaring film that James Cameron did eight years back. James Cameron's historic solo journey to the deepest point of the Earth was accompanied by the Rolex Deepsea Challenge—strapped to the outside of his submersible.

And while it did involve going deep into the water, it wasn’t anywhere near as unfortunate as the Titanic. Collaborating with National Geographic and Rolex in 2012, Cameron decided to embark on an expedition to the bottom of the Mariana Trench using a submersible vehicle. The bottom of the trench is called the Challenger Deep—the deepest known point in the Earth at more than 35,000 feet below the water. The resulting documentary was called the Deepsea Challenge 3D.  And here’s the thing: He decided to do it alone.

Keeping him company on his journey was the Rolex Deepsea strapped to his wrist. But this wasn’t the only watch that he brought with him on the journey. Rolex, being obsessed with making their watches water-resistant,  sent him another, more special one for the expedition. It was a prototype timepiece called the Deepsea Challenge, and the curious thing about it was that it wasn’t supposed to be worn by James Cameron—it was strapped outside of his submersible to resist the depths of the Mariana Trench.

Rolex had done a similar test in 1960, during the first (and previously, only) manned exploration of the Mariana Trench. The prototype they sent that time was called the Deepsea Special and was strapped outside a submersible as well. Having done it again with the Deepsea Challenge in 2012 is just the house living up to its spirit of exploration. And as for James Cameron, Rolex released a special edition of the Deepsea in 2014, in honor of his achievement.

This one definitely made the rounds over social media, but RDJ was famous even before he had any kind of account.These days, Downey is best known for playing Tony Stark—the billionaire tech genius also known as the super hero Iron Man of the Avengers. He plays the character as a charismatic, almost-off-the-rails firebrand who can’t quite get out of the spotlight. This translates to everything he does and wears, including his watch (and his Edith sunglasses).

Urwerk seemed like a natural fit. The high-luxury independent brand is known for its retro-futuristic designs and a tendency for inventiveness (their watches tell the time by using tiny satellites). 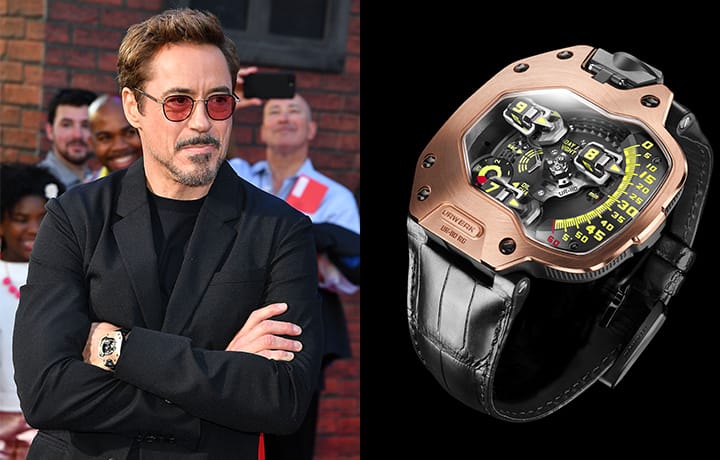 Robert Downey Jr. and Urwerk have a very curious story. And it involves the Avengers.

But the real story here is how it got to to his wrist. Apparently, someone from the production end at Marvel contacted Urwerk and mentioned that one of their characters was interested in trying the watches out, and maybe even wearing them in the movies. The people at Urwerk didn’t even know whether to believe it at first. Because things like that don’t just happen out of the blue, even when you’re selling watches that retail for tens of thousands of dollars.

But when they finally got to the bottom of things and learned that it was Robert Downey Jr. who was interested in wearing their watches, Urwerk and Marvel sealed the deal. So Iron Man ended up wearing a UR-110 in Spider-Man: Homecoming, and a 105-CT in Avengers: Endgame.

Later on, Urwerk gave Downey his own UR-110 as a gift, though it was later auctioned off to benefit a charity, earning a nifty 150,000 USD under the hammer. While it likely wasn’t easy to part with a watch like that, it seems very much in character for a guy who plays a genius billionaire philanthropist on screen.

These Pieces Add Oomph To A Blah Workwear Wardrobe