Metro Society jetted off to sunshiny Sydney, Australia last week to witness the unveiling of Louis Vuitton’s latest exhibition, SEE LV. SEE LV is on its fifth stop following the world-wide inauguration in Wuhan, China in 2020, followed by Hangzhou, Dubai, and most recently, Tokyo. The Maison’s latest exhibition is a deep-dive into Louis Vuitton’s heritage collection and its most recent iconic pieces and collaborations. Consider it an LV immersion, SEE LV in Sydney is a modern yet fantastical way to experience the luxury house through the different interactive digital rooms and heritage pieces.

Sydney was a natural choice for this stop as the coastal metropolis is home to iconic attractions and a magnificent harbour. Sydney boasts some of the world’s most recognizable landmarks, such as the Sydney Harbour Bridge, the largest steal bridge on the planet; the Sydney Opera House, regarded as a masterpiece of 20th century architecture with its gleaming white shelled structure, and the renowned Bondi Beach, framed by rocky headlands with golden sands and blue waters. Sydney is indeed hitting its stride again as it buzzes with art, food, and the surf scene.

Upon entry, visitors are greeted by a portrait of young Louis Vuitton, conceived by artist Refik Anadol using Artificial Intelligence. This sets up the tone of the adventure. They enter a room featuring a reverse-chronology selection of men’s and women’s ready-to-wear pieces. An exquisite 19th century archival gown stands alongside a historical 1906 trunk, illustrating the Maison’s longstanding relationship with fashion. From the Steamer to the Speedy, Noé to Twist, a wall of Louis Vuitton’s most iconic bags and images of their celebrity friends, including Miranda Kerr, Jennifer Connelly, Samara Weaving, Kendall Jenner, Hugh Jackman, and many more, will leave visitors starstruck. Next is an entire room dedicated to Louis Vuitton’s major contributions to the invention of luggage typologies, ranging from the iconic Wardrobe trunk to the Skateboard trunk, 1920s Auto trunks to 2020’s Louis Vuitton 2054 raincoat-tent. Finally, visitors arrive in an interactive space dedicated to the Maison’s emblematic Monogram design.

Within 5 universes, the exhibition puts together a remarkable collection of contemporary looks and early twentieth-century trunks, artistic collaborations, and iconic leather creations.

See more of the highlights of SEE LV in Sydney in the gallery below. In this room we discover 20-year-old Louis Vuitton in a portrait by Turkish digital artistist Refik Anadol, created using artificial intelligence. Louis appears slowly from one million images illustrating the Jura area where he was born 200 years ago in 1821. 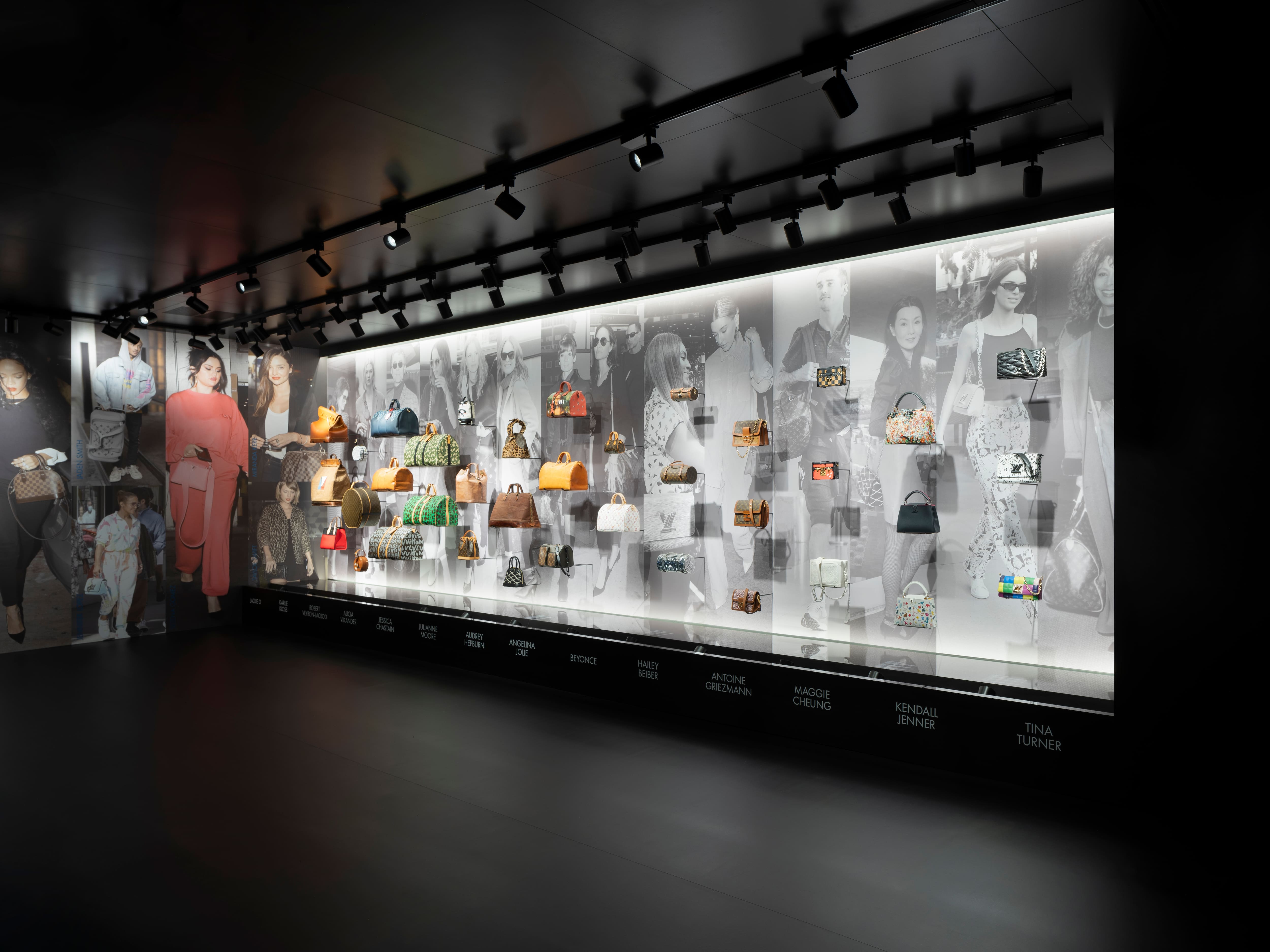 Bags have been part of the Maison’s story since the late 1890s. Initially created in leather to accompany small ventures or folded in hard sided luggage, here you see how these iconic shapes have continued to inspire through time. This wall shows both old and new icons grouped by family and in chronological order. Within this universe, discover a flat trunk from 1906 in Monogram canvas. Behold icons and artistic collaborations synonymous with the LV canon — Keepalls, Speedys, Steamers and Almas, to name a few. Dive into the Louis Vuitton fashion universe. Discover men’s and women’s looks created by Virgil Abloh and Nicolas Ghesquière, like Kim Jones and Marc Jacobs before them. Each designer is present through looks from their first and more recent shows. Established in 1995, the Louis Vuitton fashion department began its roots in 1854 when Louis began packing his clients’ Haute Couture garments – garments much like the archival period dress to be found in this room. Louis Vuitton has accompanied each and every transport revolution from the steamer ships to the skateboard, from automobiles to new urban mobilities. Within a full-size skate ramp, journey across the centuries to see how the House’s ingenious and elegant solutions have evolved to meet the demanding rigors during various transportation epochs: boat, rail, automotive, plane, and more. This room gathers some of Louis Vuitton’s most iconic inventions and explains how each one has been a cornerstone to new lifestyles. 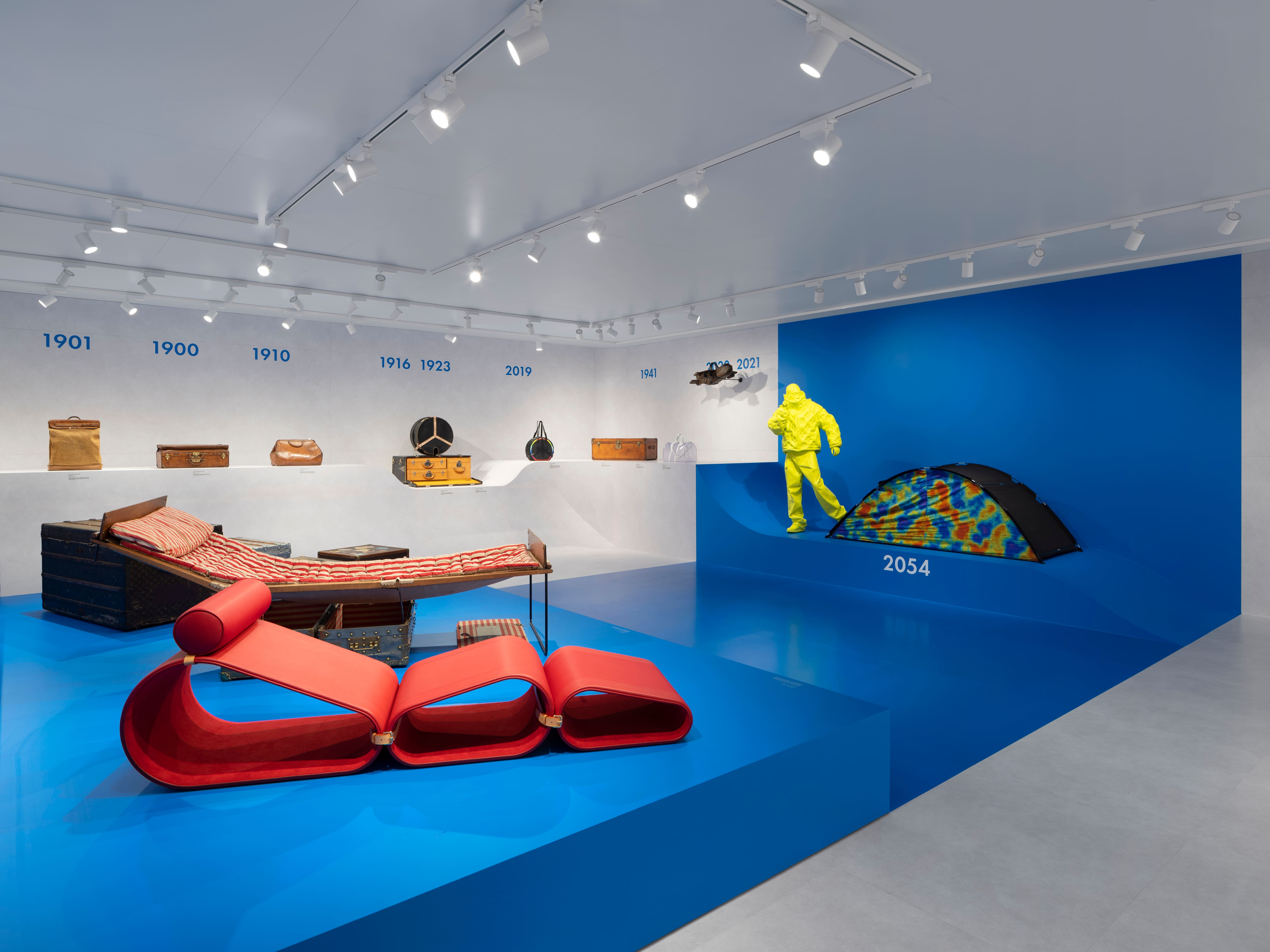 A Lounge Chair in leather designed for the Louis Vuitton Objets Nomades collection in collaboration with Marcel Wanders studio, 2016. Éditions Louis Vuitton’s latest literary launches and publications in a specially curated library space. Visitors can sit and delve into the Maison’s catalogue of over 100 titles

SEE LV in Sydney is the 5th stop in this traveling exhibition. The exhibition runs from November 4 to December 11 of 2022 at the First Fleet Park, The Rocks, New South Wales, Australia

Here's What These Celebs Wore At Louis Vuitton's Festive Party