We can't count how many times we've dreamed of a Sex And The City reboot and now it finally came to fruition! Now in their '50s, Sarah Jessica Parker, Cynthia Nixon, and Kristin Davis reunite in And Just Like That, a 10-episode spin-off of the series we have worshipped since day one. If you're wondering why there's no sight of Kim Catrall in any of the behind-the-scenes photos that have been circulating the internet so far, it's with a heavy heart that we bring you this bad news but she won't be joining the group for the reboot. We know exactly how you feel, who will bring the sex in Sex And The City? Fret not because you can trust Carrie, Miranda, and Charlotte to continue boasting very impressive and designer-filled wardrobes, the strongest of female friendships, and fascinating love and sex lives in And Just Like That. Did we mention that apart from Samantha, the original cast is back? Chris Noth will be playing Mr. Big, David Eigenberg as Steve Brady, Evan Halder as Harry Goldenblatt, Mario Cantone as Anthony Marentino, and Willie Garson as Stanford Blatch. This and more will be coming our way very soon.

Fashion-wise we're already seeing a lot of promising looks. So far we caught sight of the iconic Fendi baguette, tons of Manolo Blahniks, and the Streets Ahead studded Roger belt that have all become permanent fixtures in the SATC universe. Some surprising additions to the cast's wardrobe are the Loewe dresses, Comme des Garçons sneakers, and new age pieces from Louis Vuitton, Celine, and Balenciaga. At the gallery down below, we show you the designer looks we've seen so far. Expect major nostalgia to hit every time you hit next! Make sure to stay tuned for more because our SATC obsession will be here to stay. Charlotte in a printed cotton poplin dress from Emilia Wickstead, a pair of padded heels from Alexandre Birman, and the Fendi logo-embossed tote bag. Miranda is wearing a long shirt dress from L'AGENCE, sandals from Maje Paris, and a leather backpack from Shinola. 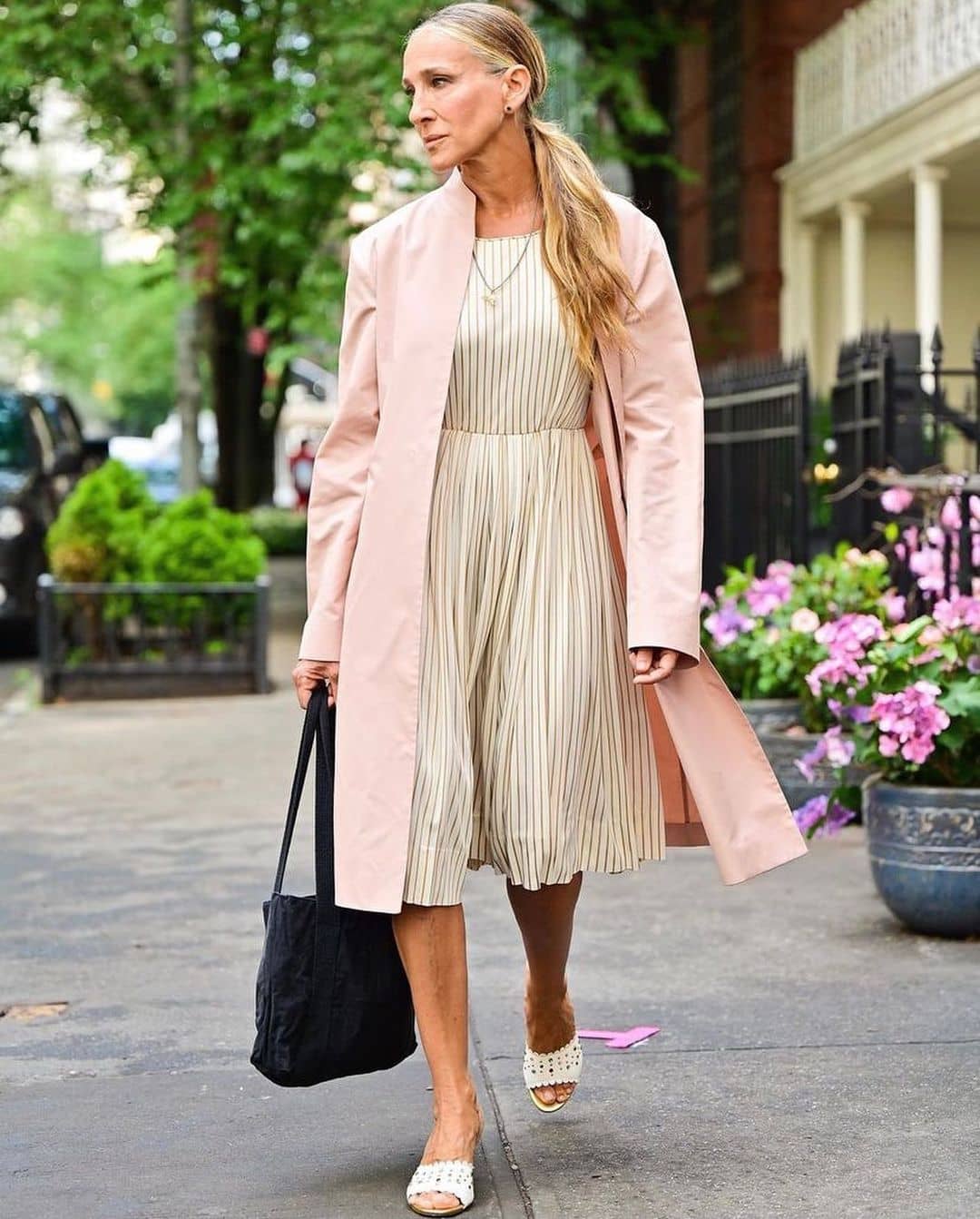 Carrie is wearing a Norma Kamali check skirt, a pair of tri-buckle Mary Jane pumps from Celine, and hat from Monrowe. Miranda is wearing a checked blouse from Altuzarra, belted tapered pants from Vince, a vintage white woven clutch from Bottega Veneta, and a pair of Manolo Blahnik BB pumps. Charlotte is wearing a polka dot off-shoulder blouse from Carolina Herrera, the mini Lady Dior bag, and a pair of J’Adior slingback pumps. 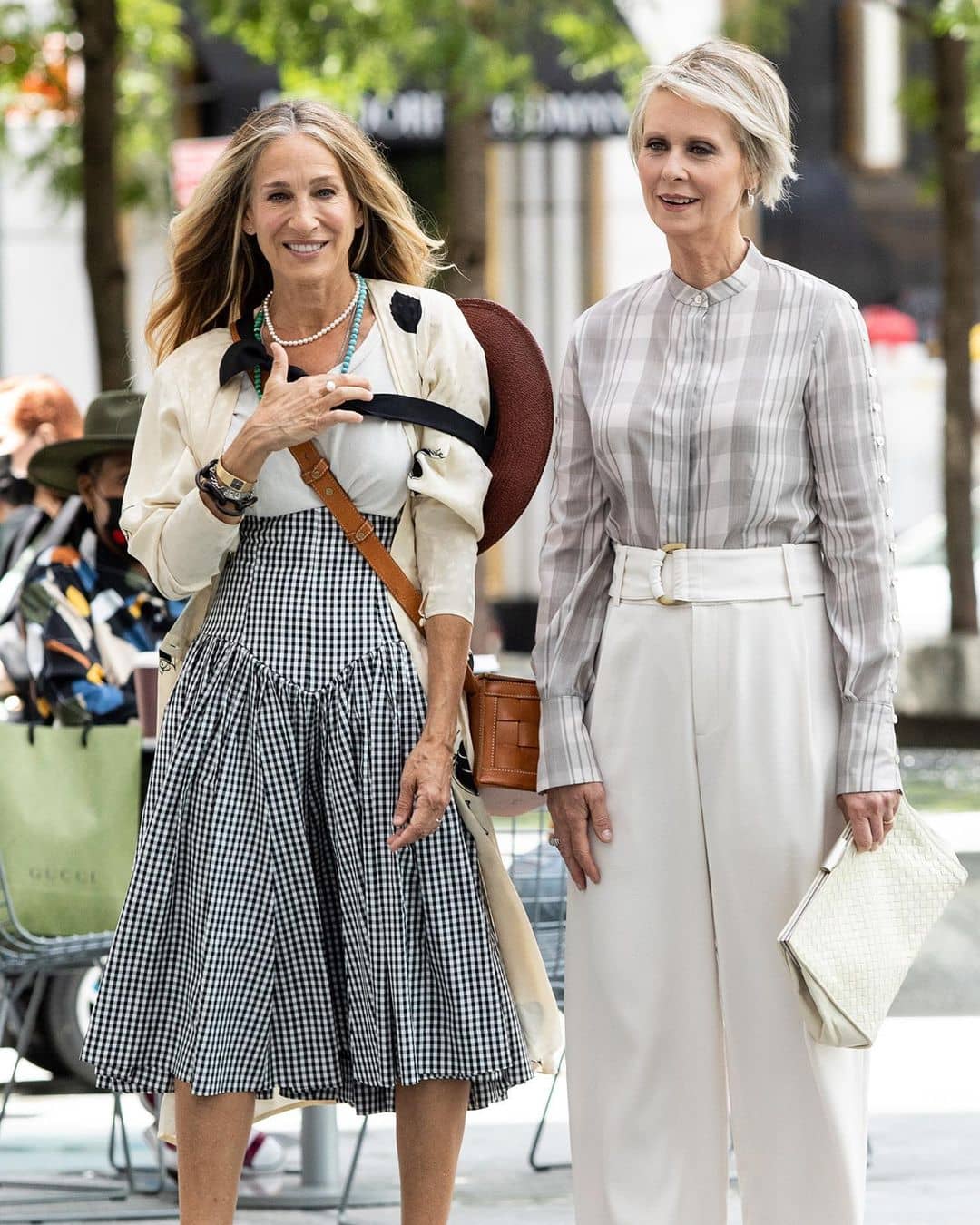 Miranda in a a matching silk tie blouse and skirt from Gerard Darel and platform sandals from Gianvito Rossi. Steve is wearing a single-breasted wool-blend suit from Paul Smith. Harry is wearing a slim-fit suit from Hugo. 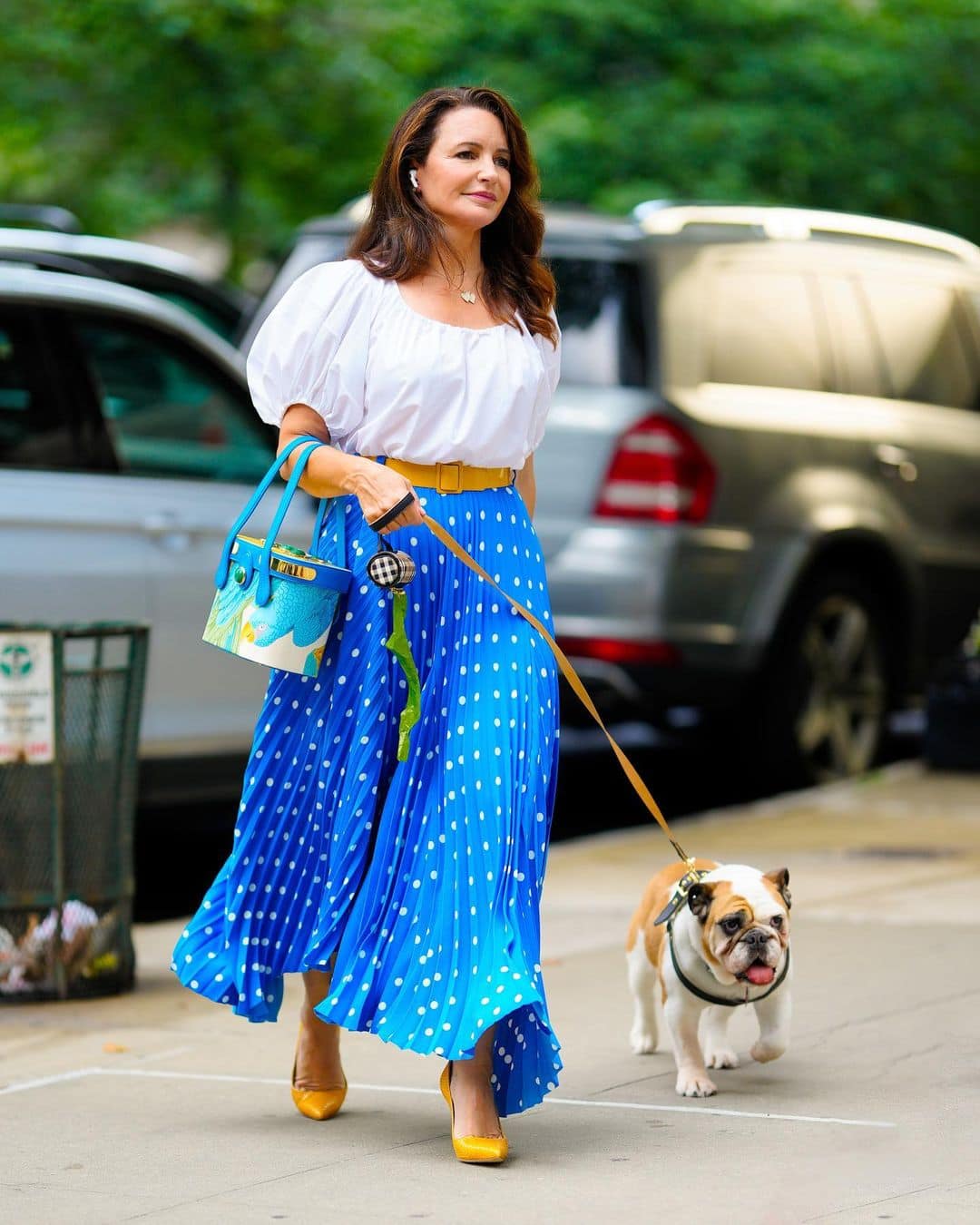 Charlotte in a puff sleeve top from Stella McCartney, an asymmetric pleated midi skirt from Balenciaga, and a pair of Manolo Blahnik BB pumps. 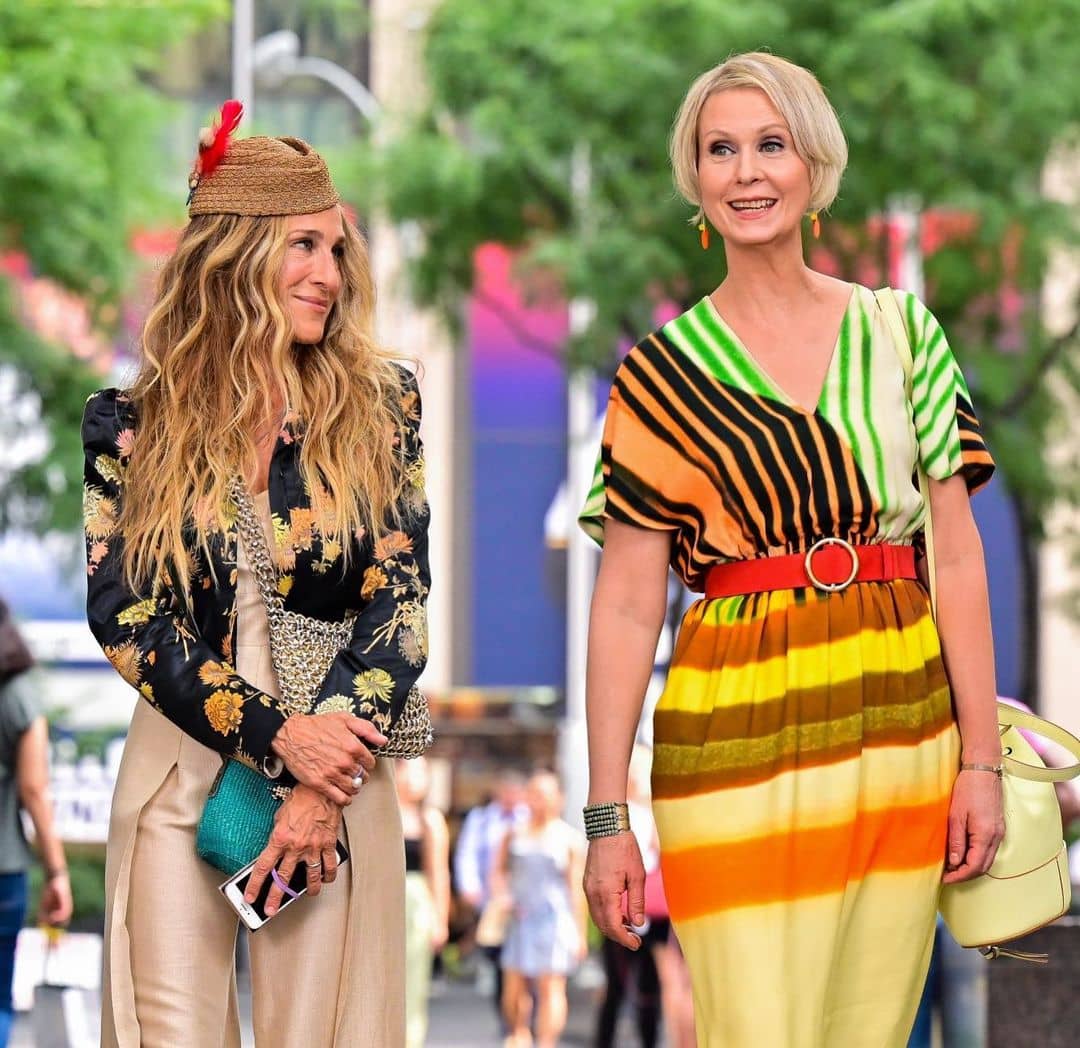 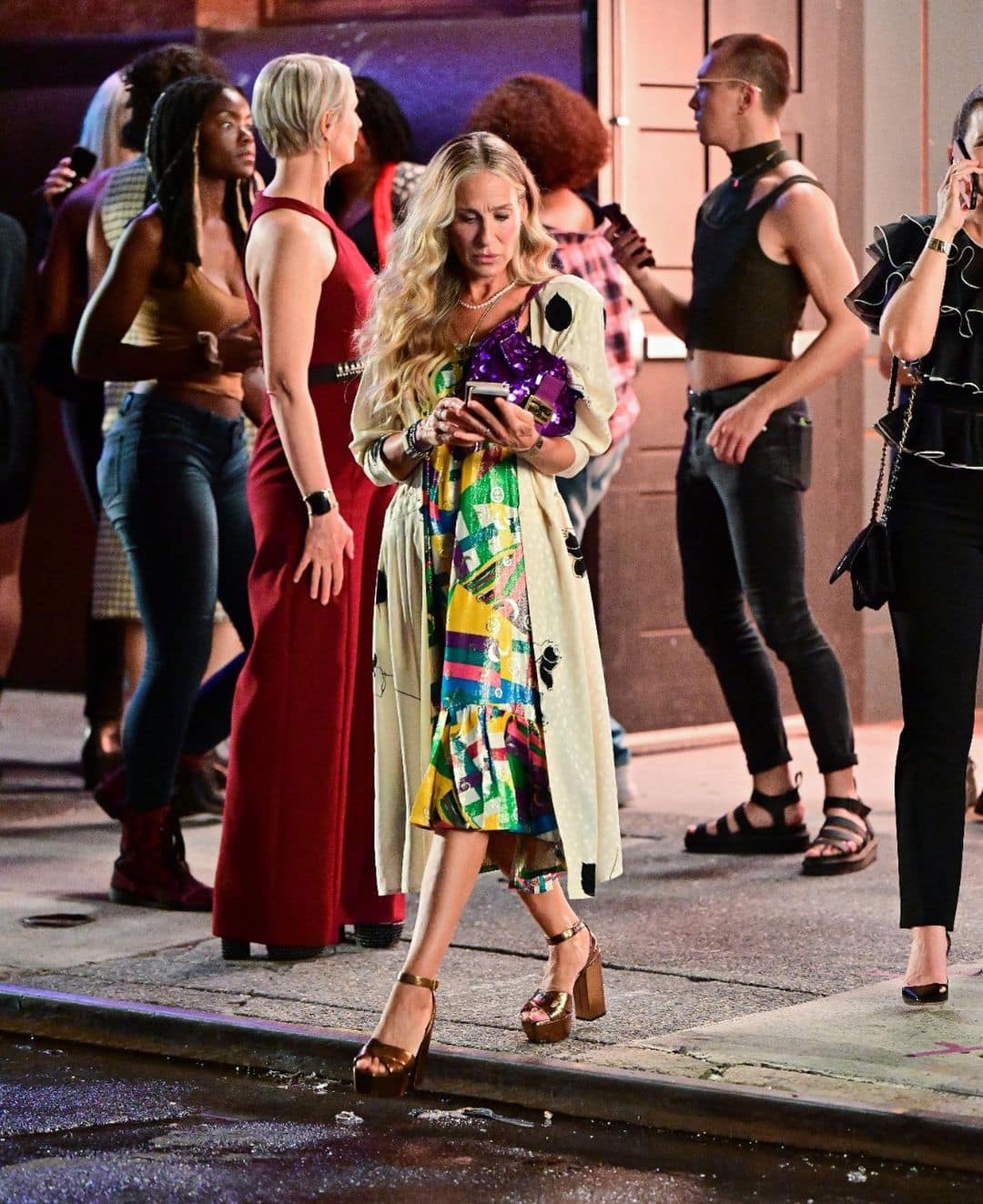 Miranda in a halter jumpsuit from Likely and a pair of studded leather platform sandals from YSL. Charlotte is wearing a vintage Givenchy ruffle organza top and a pair of leather pumps from Gianvito Rossi. And Just Like That new character Lisa in a graphic print jumpsuit from Issey Miyake, paint splattered heels from Giuseppe Zanotti, a rose gold and steel timepiece from Bulgari, a bag from Veronica Silicani, and a belted silk coat from The Row.

GET THE LOOK: Three Must-Have Rain Shoes And How To Style Them For Any Budget

Here's What You Didn't Know About The Louis Vuitton x BTS Runway Show In Seoul!