Forget the soju. Son Joong Ki plays an anti-hero with a sophisticated palate and lots of style

Every single K-drama show I have ever watched has had at least one scene where the characters are drinking soju. A good soju drinking scene is as ubiquitous to K-drama as a sampalan scene is in Tagalog movies. Soju is an effective plot device used to move the story forward. In the world of K-drama, it’s entirely possible to fall in love, plot the takeover of another nation, form unlikely alliances, make new friends, or anything else that needs to be accomplished in the story — all over a few bottles of soju.

SPOILER ALERT! If you haven’t seen Vincenzo yet, turn back now and go to Netflix to stream. You’ve been warned!

How refreshing, then, to discover that in Netflix's hit new series Vincenzo,  the characters are drinking more than just soju. The drinks menu has enlarged to include cognac, whiskey, wine, champagne, espresso and makgeolli. The alcohol lover in me is truly thrilled.

A lot of this stems from the fact that Vincenzo Cassano, the eponymous lead character played by Korean heart throb Song Joong Ki, is a Korean-born consigliere of an Italian Mafia family. That is, he’s ethnically Korean but was adopted as a young child by Italian parents and grew up in Italy. This duality is reflected in everything to do with his persona, including his eating and drinking habits.

I had fun watching Vincenzo drink his way through this slick, fast-paced story, and I even spotted a few Easter eggs! In this well-crafted drama, the drinks Vincenzo holds in his hand have links him inextricably to the dark world of the Mafia. They're used to show off his sophisticated palate, and pays homage to that fascinating underworld of secrecy and crime. Want to know more? Click through the gallery below.

"Vincenzo's" opening sequence does a slick job of establishing the show’s motifs: guns, bullets, gambling cards, and wine. Your expectations are set for fast-paced action, drama and lots of style.

Did you spot the Easter egg? I did. Episode One begins with Vincenzo Cassano (Son Joong Ki) in bed while on the bedside table is an open bottle of cognac and a crystal glass. This is a Rémy Martin Louis XIII Champagne Cognac, the favorite drink of charismatic, flamboyant John Gotti, boss of the Gambino crime family, who replaced Al Capone as America’s top mob boss in the 1980s. Gotti spent a fortune on Louis XIII cognac. Not only did he drink countless bottles, he also liked to give them away as gifts to his loyal underlings.

Louis XIII is an opulent drink that comes in an exquisite baccarat decanter and glows reddish copper in the light. It's endlessly complex, with notes of nutmeg, sandalwood, honey, leather, with a refined, rich oaky finish. It’s also very expensive. In short, just the sort of drink for a deeply Machiavallian man with a great sense of style. Put this on your bucket list.

Vincenzo takes us to one of the most spectacular settings in the series. An Italian vineyard that stretches for miles. Vincenzo tries to pressure a Mafioso boss named Emilio to return the property to the rightful owners.

Vincenzo finds Emilio sitting down to a meal of pasta and crusty bread, with a bottle of red wine on the table beside him. Vincenzo actually drinks wine throughout the series, often in moments of contemplation, but the ambience here is just too gorgeous we had to share it with you, even though we learn later that this scene wasn’t shot in an actual Italian vineyard but was all thanks to CGI. But still, it’s beautiful.

The Italian mob of wine

It’s no surprise, of course, that the Italian Mafioso drink wine, but what kind of wine? Perhaps they're drinking wines made with Sangiovese, Nebbiolo and Barbera, which are grape varietals that have been called the “Italian mob of wine” because of how they dominate the Italian wine industry.

Of these, the most familiar is Sangiovese because it’s used in Chianti. Nebbiolo, grown in Piedmont, is the grape behind the famous Barolo wine. If you want to drink like Vincnzo, pick a good chianti to pair with fresh pasta and crusty bread.

A sip of champagne

Vincenzo's reputation as a ruthless master strategist is established when he arranges for his adoptive Italian brother Paolo’s favorite sports car to explode just as soon as Paolo steps out of it. He then calls a stunned Paolo to tell him that he’s on a plane and is leaving Italy, never to return. “Do not look for me,” he warns. “The next time you try to find me, the car will explode before you get off.” Then he sits back and sips some champagne. This guy travels in style.

If you were a Mafioso drinking champagne, of course you would choose to drink the best. The Mafia’s champagne of choice? Dom Perignon, reported Linda Scarpa in her book “The Mafia Hit Man’s Daughter” where she gives the inside story about growing up in a Mafia family. The most luxurious and famous champagne in the world, this is an exquisite drink of great character. It's also quite expensive.

Vincenzo reveals his game plan to Mr. Cho while sipping espresso. An honest-to-goodness Italian espresso is, naturally, the best drink for any sober Mafioso planning how to build his empire. Vincenzo and Mr Cho’s strategy is quite simple, really. A Chinese billionaire has cached a huge amount of gold beneath a nondescript building in South Korea. The billionaire is dead and nobody knows about the gold. Surely to get the gold out is a simple matter? The two men contemplate.

The Mafia and Italian cafés

With a network that stretches everywhere, it stands to reason that Mafia influence reaches into the world of Italian cafes. Why, just this month, The New York Times reports that Mafioso were accused of operating a cafe right inside the courthouse of the Italian city of Potenza. We’re not surprised. To brew your own Italian espresso at home, pick up some Italian coffee beans from Bacchus Epicerie. Order online at bacchusepicerie.com. 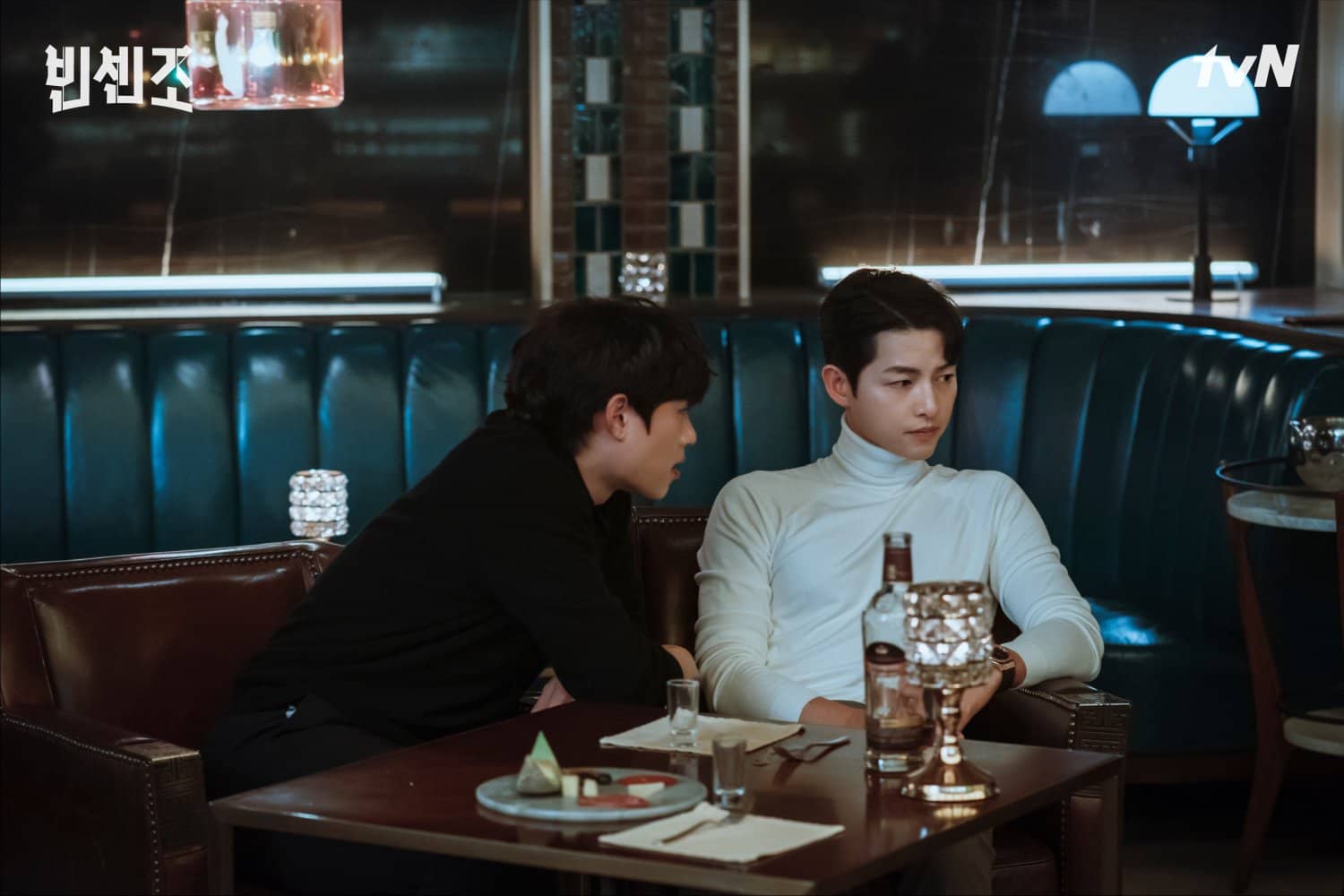 Fast forward to Episode 8, Vincenzo needs to get the President of Shinkwang Bank, a certain Hwang Ming-sung, on his side. A background check reveals that Min-sung has a predilection for good looking young men. So Vincenzo arranges to meet Min-young "by accident", dazzle him with his good looks, and agree to meet up for drinks. The whole set up is one of the funniest sequences of the series.

Whiskey is a drink for chaebols and Mafia

Whiskey is the perfect choice for Vincenzo’s “first date” with Min-hung. It's sophisticated drink for people with deep pockets, and in K-drama is usually reserved for moguls and chaebols, which Min-sung certainly is (after all, he's CEO of the premier bank in this fictional universe). Rye whiskey is also the drink of choice for the American mob. FBI undercover agent Jack Garcia said mobsters always ordered their drink by brand. "It was never a scotch and water," he said, "it would be a Cutty and water." Vincenzo and Min-sung are probably drinking an American rye whiskey, suitable for both the chaebol and the undercover Mafioso. You can order a whiskey from boozy.com.

Magkeolli is a traditional Korean rice wine that Vincenzo starts drinking with lawyer Hong Yoo Chan. This is a turning point for Vincenzo. Before this, he seemed only concerned with himself. As he interacts with Hong Xoo Chan, Vincenzo slowly becomes invested in the affairs of his fellow Koreans, the residents of Geumga Plaza. It's as though Vincenzo held aloof from his Korean heritage, slowly succumbing with every drop of makgeolli he drinks. 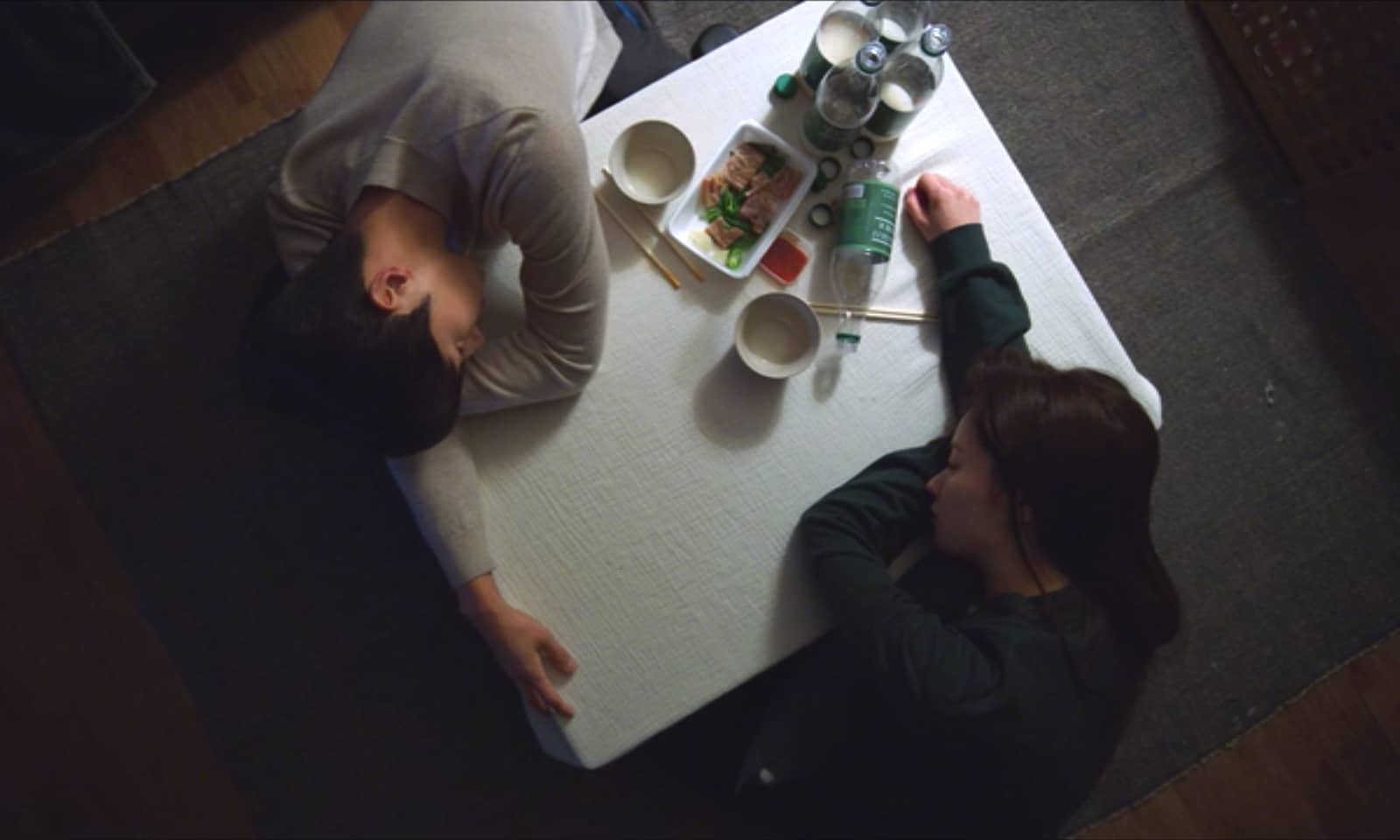 After Hong Yoo Chan's murder, Vincenzo eventually finds himself drinking makgeolli with the old lawyer's daughter, Hong Cha Young, who becomes his love interest. Here they are after a night drinking together.

In sharp contrast to the expensive and stylish Western drinks Vincenzo has been indulging in, makgeolli is a farmer’s drink. It’s usually served from a kettle and poured into stainless steel bowls. Milky, fizzy with a sweetish-tart flavor, to be offered a bowl of makgeolli is the equivalent to being given a bowl of rice. You can order makgeolli from your neighborhood Korean grocery (available via GrabMart). They also come in flavors like banana or peach.

Wasn’t that fun? I hope you enjoyed our tongue-in-cheek “analysis” of Vincenzo’s drinking habits, and if you found a new drink to explore, so much the better. Till the next K-drama food review.

In Photos: The Full List Of Winners At 2020 APAN Star Awards