To celebrate Filipinos who are making it big around the world, we honor 20 of the most prominent chefs, restaurateurs, food writers of Filipino heritage who have contributed significantly to the culinary scene in their adopted countries.

We typically don’t expect a Filipino restaurant to be queued up in the capital of the United States of America. But with daily queues that form hours before its opening time, Bad Saint has proven that Filipino food done well (and creatively) can be truly sought after. Heading Bad Saint is Tom Cunanan who was recently awarded the Best Chef in the Mid-Atlantic category of the prestigious James Beard Award last May 2019. Cunanan’s ingenious takes on Filipino classics is complemented by trips to the Philippines where he immerses in traditional cookery and researches on local ingredients, which he then applies to his contemporary Filipino-American milieu. Through his culinary talent, Cunanan has led Bad Saint to great heights, becoming Bon Appétit’s number 2 Best New Restaurant in the United States in 2016.

READ: This Filipina Chef May Have Conquered The NYC Dining Scene—But She Still Won’t Give Up Her Lechon Kawali

If there are two huge names in the Fil-Am culinary scene that you need to know, it would be Amy Besa and Romy Dorotan. The duo has been at the forefront of serving Filipino food in the United States even before the advent of popular Pinoy food trucks, and Philippine cuisine was being dubbed as “the next big thing”—they were pioneers. In 1995, husband and wife opened Cendrillon, a pan-Asian restaurant in SoHo, Manhattan, and then after its 13-year run, opened the more Philippine-centric Purple Yam in Ditmas Park, Brooklyn. In 2006, Besa and Dorotan wrote Memories of Philippine Kitchens (revised and updated in 2012), chronicling stories and recipes culled from different regions in the Philippines, earning the book the Grigson Prize from the IACP.

READ: This Is How Up-And-Coming Filipino-American Chefs Eat Their Way Through the Philippines

Stoked about a petition in partnership with change.org to recognize Earth Day as a government national holiday around the globe. Link in bio to sign! An official Earth Day could mean so many things for us: more time for adventures, thinking, chilling, QT with friends, exploring. This type of rest and acknowledgement of ?? MUVA EARTH ?? is necessary. S/o to @thenorthface for starting this petition and check out my stories for a surprise for my NY people! #NeverStopExploring #EarthDayPetition #ad

Crisscrossing politics, culture, art, fashion, and cuisine and managing to convey a coherent product from these interactions is a skill and a passion synonymous with Angela Dimayuga. Dimayuga broke into the scene when she became the principal mover for Mission Chinese Food’s first New York restaurant. While Mission Chinese Food is known for its eclectic take on Chinese-American cuisine, Dimayuga further elaborated on the dining experience through inter-disciplinary collaborations among designers, food chemists, artists, and leading a “concept-driven” restaurant. After a much-talked-about departure from Mission Chinese, Dimayuga joined The Standard as its Creative Director of Food and Culture, a position that enables her to diversify and expand her role as chef. She draws inspiration from her Filipino-American, Asian-American heritage but also from the context she lives in—something she is able to reflect in her unique food.

Inspired by the Malaysian egg burger and the bodega egg sandwich. @theburgershow ??: @nycfoodguy

One of the most promising culinary stars in the United States today is Alvin Cailan. A product of a Filipino household in Los Angeles, Cailan’s fame picked up when in 2011, he opened Eggslut, “a chef driven, gourmet food concept… inspired by a true love for eggs.” He also forayed into Filipino takeout food with his restaurant Amboy and recipe kits for Bob’s Burgers. His move to New York, however, has created waves in the local gastro-scene when he opened The Usual in NoLita. His first sit-down restaurant, Cailan’s The Usual is already becoming the toast of the highly-competitive and creative New York dining scene.

If there is one common remark about why Filipino food does not seem to be as popular as the cuisines of our Asian neighbors, it’s because we don’t always know how to talk about it. To remedy that, Jacqueline Chio-Lauri has given the world an insightful look into the story of Philippine cuisine as she compiled and edited 30 recipes to create the well-received, multi-faceted book, The New Filipino Kitchen. Apart from her experience in opening and managing restaurants in international hotel brands such as Shangri-La and Sheraton, Chio-Lauri has been writing and speaking about the diversity, breadth, and uniqueness of Philippine gastronomy through different media.

Who can imagine that a girl who grew up in Sampaloc, Manila would become the Executive Chef of the White House? Well, Cristeta Comerford tells us that dreams happen but they also become real through hard work, dedication, and talent. Comerford attended the University of the Philippines where she took up Food Technology, then immigrated to the US at 23 years old. In 1995, then White House Executive Chef Walter Scheib III recruited Comerford as an assistant chef and since then, she has displayed exemplary kitchen prowess, being promoted to the role of Executive Chef by Former First Lady Laura Bush in 2005, and reappointed to the same role by Former First Lady Michelle Obama. Comerford is the first woman and first person of Asian descent to hold the position in arguably the most famous household in the United States.

#Repost @chefxs with @repostapp ··· 12 years ago Chef @charlesolalia started right here on the line in Navio ! we are so proud to have him here showcasing his own food for our #globalcuisineseries ! #cheflife #chef #chefevent #cooking #plating #finaltouches #filipinofood #filipinocuisine #ritzcarltonhalfmoonbay #rcmemories #navio #ontheline #events

With wallpaper evoking the tropics, a Philippine flag hanging on the front door, and a name that is emblematic of easy Filipino hospitality, Ma’am Sir is Charles Olalia’s highly popular ode to his Filipino heritage. Olalia, who traces his roots to Pampanga, the Philippines’ culinary capital, was once associated with upscale restaurants, most notably the famous Patina of Joachim Splichal. With his talent and skill honed in some of the most renowned fine dining restaurants in the West Coast, it was a welcome surprise that Olalia took on Filipino cuisine, first by opening the tiny Ricebar, followed by Ma’am Sir. In the process, he brought it a few levels higher, not only with sophisticated innovations, but also with his honest, straightforward approach, making Pinoy food more attractive and exciting. 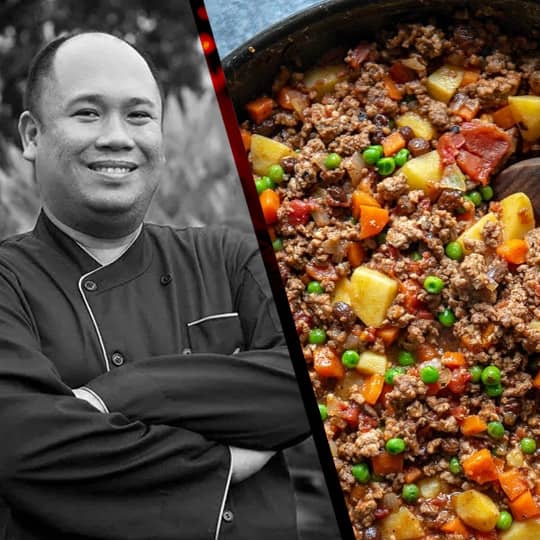