The best and most interesting tikoy offerings from traditional Chinese bakeries, restaurants, and hotels around the metro

Glutinous rice flour, sugar, and water are the three simple ingredients of that most essential delicacy during Chinese New Year: the tikoy.

Tikoy (also called Nian Gao in Mandarin) has a rich and colorful history. There is an old legend of the Kitchen God who gives a yearly report about every family to the Jade Emperor. By this report, the emperor determines whether or not to bless the family members with long life (or presumably, to punish them). Every year, people offer tikoy to the Kitchen God, hoping to bribe him with the sticky treat so he'll sweeten his report to the emperor.

Another version follows the mythological monster, Nian, who used to live in the mountains and come down to hunt humans when hungry. A villager named Gao began to leave rice pastries outside the villagers' doors so the monster would eat the pastry instead of the humans. Surprisingly, it worked and the monster never went back to eating humans again. In honor of this, the villagers named the rice delicacies after the monster, Nian, and the clever human, Gao. Ergo, Nian Gao.

Nowadays tikoy comes in many shapes and flavors, from the fun to the luxurious. And because we know you’re scouting for the best tikoy to buy for Chinese New Year, we put together this list of the best and most interesting tikoy you can find in the metro.

Crowne Plaza Manila is holding its Chinese New Year celebrations from January 15 to 31. Their tikoy comes in the traditional circular shape, embossed with the character for prosperity (福)  in red. It comes in classic white, pandan, and ube flavors, at P1,088 per box. 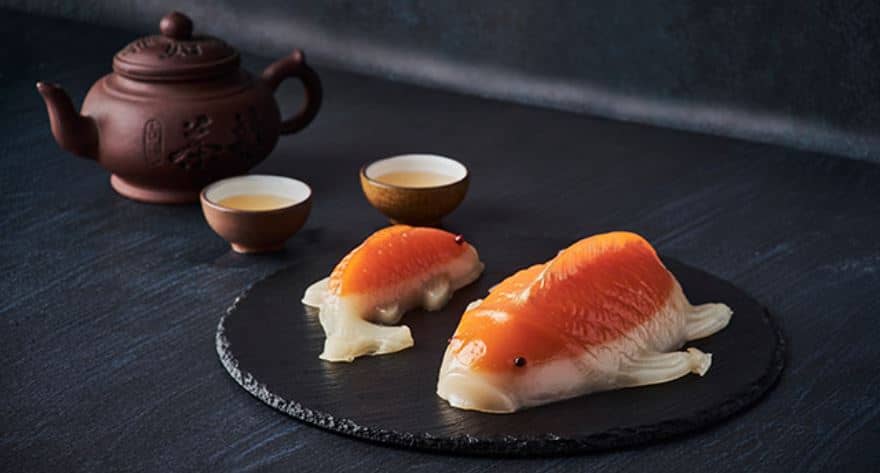 In the Chinese language, nian gao is a homonym for “higher year.” The word “nian,” which means “sticky,” sounds identical to the word for “year,” while  “gao,” which means “cake,” is identical to the sound of the word for “high.” To eat nian gao during the Chinese New Year is symbolic for a resolution to raise or elevate one's self in the coming year.

Jasmine at the New World Makati Hotel has beautiful signature Nian Gao available round (P1,188) or shaped like the lucky koi fish (P1,388). For fancy, upscale tikoy, check out Manila Marriott Hotel’s Chinese restaurant, Man Ho, where tikoy appear like little gems encased in beautiful boxes. The  Premium Red Box (P1,388) is sealed with a gold stamp and contains two koi fish-shaped tikoy, one weighing 350 grams, and the other at 750 grams. The Gold Tin Can (P888) has one koi fish tikoy and one gold ingot-shaped tikoy.

If you’re wondering why tikoy is so often molded into the shape of koi fish, it’s because this fish symbolizes longevity and success. Marriott’s koi fish tikoy are so beautifully executed it’s almost a shame to eat!

Marco Polo Ortigas is home to Chinese restaurant Lung Hin where different flavors and selections of tikoy are available every year. For 2020, there are two special flavors: pandan and dates.

You can enjoy the tikoy at Lung Hin, where it will be served sliced, steamed, and the pandan tikoy will be rolled in toasted coconut. You may also buy tikoy to take home. The Double Gold Bar Nian Gao (P1,888 per box), contains two gold bar-shaped brown sugar tikoy at 400 grams each; the Single Round Nian Gao in red dates sugar is at  P798 per box; and the classic Large Round Nian Gao comes in two flavors—pandan and coconut, and red dates sugar—at P1,388 per box.

Unlike the traditional Chinese and Filipino flavors that many bakeries and restaurants offer around the metro, China Blue gives a fun twist to this Chinese delicacy by creating such interesting flavors as white almond, caramel coconut red bean, and passion fruit. The box is available at China Blue until January 26 for P1,888.

Makati Shangri-La has a number of Chinese New Year treats lined up for 2020, but when it comes to tikoy, they’re sticking to what they know best. Shang Palace’s signature Nian Gao is available in traditional, mango, and lotus flavors. Order the Prosperity Fish at P1,888 per box or the Double Happiness Fish at P2,688 per box.

Chinese New Year 2020: Where To Welcome The Year Of The Rat

Chua Chiu Hong, the founder of Eng Bee Tin, opened his store in 1912, and has since been selling tikoy and other Chinese delicacies to Filipinos. Today, Eng Bee Tin continues to be a leading Chinese bakery. And in spite of it’s standing as a landmark institution, the bakery still manages to innovate, spicing up their tikoy flavors. Apart from the classic white and brown tikoy, they also have other flavors like ube, pandan, sweet corn, muscovado, and strawberry.

This year, they have a limited edition Cheese Tikoy that’s perfect for the Year of the Rat. They even have the sugar-free Lite Tikoy in classic, ube and pandan.

Salazar Bakery has been in operation for more than 70 years now, and its Binondo branch is still one of the most popular Chinese bakeries in the area. They have, however, expanded to mall locations outside Chinatown, including SM North Edsa, SM Manila, Farmers Plaza, and SM Southmall.

If you’re looking for tikoy with a little more texture and depth, Salazar Bakery has portion-size tikoys filled with peanuts or sesame.

Echague Bakery is one of the oldest manufacturers of Chinese delicacies in the country, and they’re known for their super delicious hopia. Their tikoys won’t let you down, and they're available in a variety of flavors: white, brown, ube, and pandan. If you can’t decide, grab the box of Four Seasons for all four flavors.

Their tikoy is known to be more firm to the bite. Since it’s firmer than other tikoys, it’s the best vehicle for butter and sugar. Think of it as a Chinese version of the puto bumbong.

Echague Bakery has branches in The Landmark TriNoma, Fisher Mall Quezon City, and Fisher Mall Malabon. You can also order via Grab Food.

Sweet Taste Tikoy's red tikoy box is one of the most iconic in the days leading up to Chinese New Year. It’s the gold standard for homemade tikoy in Manila.

Sweet Taste Tikoy keeps it pretty simple—it’s only available in classic white and brown varieties. When cooked, it stays soft with the just right amount of chewiness. It also stores well in the refrigerator and is easier to slice.

Order from Sweet Taste Bakery, at 47-A Nicanor Roxas Street, Quezon City; or send them a DM on IG: @sweettastetikoy

Don’t be quick too judge this quaint, family-owned store just because they’re more known for their tasty hopia and mooncakes than tikoy.

Apart from the usual white, brown, and lite tikoy variants, they also have special flavors like ube, pandan, and red bean. These make for versatile ways of cooking tikoy such as lumpia tikoy. To cook, wrap a slice of the ube tikoy with chopped langka in lumpia wrapper. Coat in egg and then fry.

Take advantage of their special promo where you can get one free box of tikoy for every ten boxes you purchase, only until January 22.

Did you know that the word “tikoy” came from the Fookien “ti,” which means “sweet,” and “ke” meaning “cake?”

If you’re dining at Gloria Maris, you might as well stock up on the sweet cakes, too. The Gloria Maris Banquet Hall at Gateway Mall has the four regular tikoy flavors—white, brown, ube, and pandan—at P300 per kilo.

Want to serve it in a fresh new way? Try stir frying garlic in oil, then add pork, shrimp, sliced tikoy strips, and a tablespoon of soy sauce, 1/2 tablespoon of sugar, 1/2 cup of water, and sliced cabbage.

Choi Garden has been a go-to Chinese place for many families since it opened, and it’s a favorite place for family celebrations and get-togethers. We’re already expecting Choi Garden to be fully booked leading up to the Chinese New Year, but you can still grab their two special tikoy flavors if you miss a chance at the tables. The have the classic brown sugar for P338 a box, and a special Chinese date-flavored tikoy at P358 a box. The special date-flavored tikoy is quite interesting and aromatic, surely a must-try if you have had your fare share of tikoys.

Hai Shin Lou is a popular Chinese and seafood restaurant from Cebu, but now they have a branch in Makati. While other restaurants offer as many tikoy variants as they can, Hai Shin Lou sticks to its only variant: red date tikoy from Hong Kong.

Tikoy is comes in many variations, which is no surprise since there’s tikoy in the different parts of China and all over the world. In northern China—in Beijing and Shandong, for example— tikoy is made with red dates or jujube and yellow rice, so it becomes softer than tikoy we have grown used to here.

Hap Chan is probably many Filipinos’ entryway to what feels like an authentic Hong Kong tea house. Beginning as a small tea house in 1997, it has grown into one of the biggest Chinese restaurant franchises in the country.

As they do every year, Hao Chan keeps its tikoy straightforward and simple. The round tikoy is available in white and original brown sugar for P185 and ube at P195.

Metro Benefit Sale: Good Deals, Company, and Food For a Good Cause