Carlo Aquino and his non-showbiz girlfriend Trina Candaza are now parents to a little girl!

There's a Rico Blanco song that goes, "You can thank your stars all you want, but I'll always be the lucky one.."

It's a love song, one sung to lovers old and new, but have you ever thought of a first-time dad dedicating the same words to his newborn daughter? Because that's exactly what actor Carlo Aquino did in a heart-melting Instagram post, one that came as a huge surprise for even his most loyal of fans.

Using the lyrics as caption, he posted a photo of a baby, but not just any baby—it was of his own infant daughter, his first child that he welcomed with Trina Candaza just last week.

They even revealed another sweet detail about the baby girl: her name. She's called Enola Mithi Aquino.

The couple managed to keep their baby news under wraps since finding out that they were expecting late last year or early this year, and shocked the public when they revealed they had become parents during the pandemic.

In the few times that Carlo has publicly talked about Trina, he has often alluded to her being "the one." He and Trina officially made their relationship status public in late 2019.

The first-time parents' celebrity friends were quick to share their well-wishes to the couple. There to congratulate them were Ria Atayde, Sue Ramirez, Zanjoe Marudo, Gretchen Ho, Vhong Navarro, Gladys Reyes, Chie Filomeno, and Rodjun Cruz.

Less than a day after their big announcement, Carlo and Trina have started sharing photos of their baby girl. Trina posted one of Carlo and Enola's first snaps together as father and daughter, and judging from this, we're sure that more portraits showing the growing love in this family are to come our way. 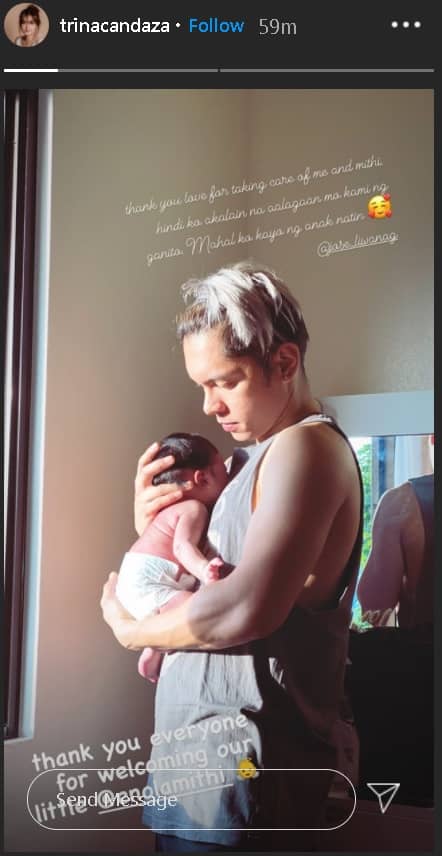 Check out our exclusive interview with soon-to-be mom of three Andi Eigenmann: