We got to know the "Forecasting Love and Weather" lead actor better at his recent virtual fan meet with Netflix, where he talked about his favorite food, his idea of a perfect date, the genre he hopes to try next, and more!

Song Kang is one of the most in-demand Korean actors today, and it really isn’t hard to see why. Not only is this 27-year-old drop-dead gorgeous and oozing with charisma, he’s also a talented actor who’s willing to go out of his way to portray a character (hey, he even learned ballet for six months for his role in Navillera!).

He debuted as an actor in 2017 via a supporting role in rom-com series The Liar and His Lover and debuted in a film the following year with The Beautiful Vampire. After several supporting roles on the small screen, he landed his breakthrough role in the 2019 webtoon-based mini series Love Alarm, which returned for a second season in March 2021.

Since playing the role of handsome high school student Hwang Sun-oh in Love Alarm, Song Kang has been on a roll. He has earned the title “Son of Netflix,” considering that the K-dramas he worked on after his breakthrough series were all made available for streaming on Netflix: Sweet Home (as Cha Hyun-soo, a high schooler who gains superpowers while caught in the middle of an apocalypse), Navillera (as Lee Chae-rok, a ballerino who’s struggling financially), Nevertheless (as Park Jae-eon, an art student who likes flirting around and doesn’t want to commit in a relationship), and the ongoing Forecasting Love and Weather (as Lee Shi-woo, a staffer at the Special Reporting Division 2 of Korea Meteorological Division).

10 Things You Should Know About Song Kang Of "Love Alarm"

In less than five years in the industry, Song Kang’s popularity skyrocketed, and quick proof of that is the fact that he is currently one of the most followed Korean actors on Instagram with more than 13 million followers. At his recent fan meet, the first-ever K-star fan event that Netflix hosted, his global reach was further proven with fans from countries like the Philippines, Singapore, Vietnam, Malaysia, and Thailand tuning in on the live streamed event.

It’ll be Song Kang’s fifth TV debut anniversary a few days from now since his first acting project, The Liar and His Lover, debuted on March 20, 2017. And throughout these years, Song Kang has been recognized by various award giving bodies like the 2021 Asia Contents Awards where he won the ACA Excellence Award for Sweet Home, the 2021 Brand Customer Loyalty Award wherein he won the Male actor - Rising Star award, and the 2021 Seoul International Drama Awards wherein he won the Character of the Year award also for Sweet Home.

During Song Kang’s recent fan meet live event with Netflix, we’re happy to have gotten to know him better. Scroll through the gallery below for facts about Song Kang, straight from Song Kang himself: 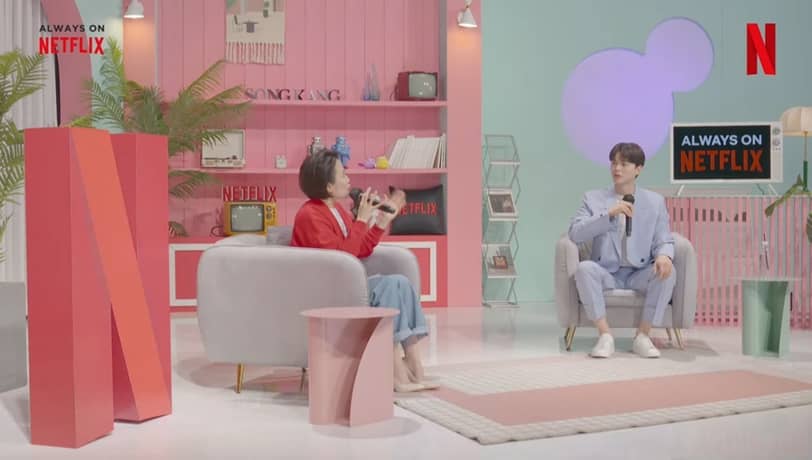 During the first part of the fan meet event, there was a segment wherein Song Kang shared some photos from his phone’s gallery. The first set showed him exercising (he says he stretches a lot and is pretty flexible), the second set showed mirror selfies with him wearing a sporty jacket (he says it’s like “a boyfriend look”), and the third set are a series of selfies which are just distinctively aegyo. Song Kang said, “I’m really bad with selfies. But I try these days.” As a tip for taking selfies, he added, “I don’t know if it’s a tip. But I try to pose with a V.”

He has a good memory.

And that was put to the test during a segment in his fan meet wherein he was asked to answer five questions that are focused on details of his Netflix shows. The questions were: “[In ‘Forecasting Love and Weather’], how much did Si-woo bet that it would hail?,” “[In ‘Sweet Home’], what color are the earphones Hyun-soo wears while monster hunting?,” “[In ‘Navillera’], what vegetable did Chae-ro dislike?,” “[In ‘Nevertheless’], what subject did Jae-heon and Na-bi [Han So-hee] study together at her apartment?,” and “[In ‘Love Alarm’], while at the VIP Badge Club, how many Love Alarm users rang Sun-oh’s alarm?” Song Kang answered all correctly, and added that for “Sweet Home,” he remembered that detail because he chose the yellow earphones himself with the director and that the earphones he actually uses are white.

During the Q&A segment in his fan meet, Song Kang shared that he’s allergic to shellfish and that he can’t eat too many fruits, too, because of their acidity.

Answering a question sent by a fan from Australia regarding his pre-shoot rituals, Song Kang shared, “Well, before going on set, I listen to music, mellow music like ballads. And right before shooting, I gargle and try to cleanse my mouth, and apply lip balm… I’m often [in] over my head, so I do try to calm myself down.” Song Kang also said that he likes new-age music and that he listens to a lot of pop tracks.

He associates fragrances with his characters.

This is pretty interesting. A fan asked how he usually gets into a character, and Song Kang said that he applies perfume on the early days of shooting. He shared, “I choose a cologne that suits the character… I’ve been wearing citrusy kind of cologne and for Jae-eon, I wore something sweet like yogurt.”

He was asked to pick which among his characters he could live with for the rest of his life, and he answered…

“I would go with Chae-rok. He’s very focused on his goal and he strives to achieve it. While acting that role, I realized how amazing it is to be a person with such tenacity… When it comes to goals, I do try to achieve my goals and I’m almost always sleepless until I make it.”

He prefers to be alone, especially when he’s dealing with something.

A fan from Jamaica asked if he’d rather be with someone or be alone when he’s sad. To which, Song Kang replied, “Being with someone or being alone. I like being alone. When I’m too exhausted, I do ask for help and meet helpful people but I end up clearing up my mind alone. I think that’s important so I don’t reach out to meet people but I try to spend time alone. By reading, working out… I’d write journals and that helps a lot. So I try to be by myself.”

When a fan from Malaysia asked what he normally does when he doesn’t have work, Song Kang said he just usually rests at home while listening to music. He works out and eats, and he goes shopping. In the earlier part of the fan meet, he also shared that he prefers to go shopping on his own and that he shops online, too.

He wants to improve his cooking skills.

He can easily prepare ramyeon and kimchi fried rice, but he wants to also try cooking lamb and hopes to share that through a vlog when he finally gets to do it.

When asked to share the Netflix shows he recommends others to watch in their free time, of course, he suggested his own shows. But he also mentioned that he loves watching documentaries, and that he loved the British sci-fi anthology “Black Mirror.”

His favorite food is tonkatsu.

A fan from Singapore asked, “What is something you will eat if you can only eat one thing for the rest of your life?” Song Kang said, “It’s easy for me. Tonkatsu. I failed at making tonkatsu. The batter, I failed to make it crispy. All my tonkatsu turned black… If I’m hungry today after work, I’d think of eating tonkatsu. I’m hooked on spicy-pizza-tonkatsu. It’s so good. With udon, it’s everything and more.”

He plays the piano.

Song Kang showed his piano skills at his fan meet. He performed one of the songs from “Love Alarm” titled “Blooming Story” by artist Tearliner. He said that he picked this song because it’s a song from his first project with Netflix. And now that he’s been dubbed as the “Son of Netflix,” it’s easy to understand how special “Love Alarm” is for him.

“Workout and watching Netflix and shopping then have tonkatsu,” Song Kang shared, further proving what a laid-back kind of guy he is. He added that he loves working out and that he usually devotes two to three hours a day for that.

He wants to portray a character in an action TV series/film.

Song Kang’s favorite genres are rom-com and action. His fans have seen a bit of how he acts in the rom-com genre with his current K-drama, “Forecasting Love and Weather,” but it would also be nice to see him in a more challenging role in an action series or film. And it’s something that Song Kang wants to try too. He said, “I haven’t done action yet… When I watch action scenes, I enjoy that intensity, so I want to try it myself.”

Lead photos from Netflix | Gallery screenshots from The Swoon on YouTube

C-Drama Actresses In Their Most Beautiful Makeup And Beauty Endorsements

Your Guide To Independence Day Streaming