"The most painful part was when we were looking at each other with tears in our eyes and we could not even hold or hug each other for comfort because of social distancing," she says

It was an emotional night for Kapamilyas last Tuesday, May 5, as top media network ABS-CBN shut down its television and radio operations in the Philippines at exactly 7:52 p.m., to comply with the National Telecommunications Commission’s (NTC) cease and desist order against the company.

As netizens expressed their disbelief on social media over what happened for the second time in the history of Philippine media, it was even more poignant in ABS-CBN's newsroom. It only took a matter of time before ABS-CBN reporter Gretchen Fullido—who has been a part of TV Patrol since 2010—let slip her awe as she felt the solidarity and unity of the company's employees as well as the pride of standing with the media giant even in these uncertain times.

November 8, 2010: This was the first day I started anchoring for TV Patrol for Star Patrol ⭐️ It was a monumental day as Kabayan Noli de Castro and @korina Sanchez-Roxas came back and joined Manong Ted Failon & @kuyakim_atienza for the flagship primetime newscast of ABS-CBN TV Patrol 🇵🇭 . Such an honor working with my idols in broadcasting. I learned a lot from them and from my fellow reporters, desk editors, producers, cameramen, and everyone behind the scenes working day in and out to deliver news and content to our Kapamilyas all over the world. This is a memorable photo that I will always treasure. I am forever grateful 🙏🏼❤️💙💚 . Last night May 5, 2020: ABS-CBN signed off after TV Patrol. It was very emotional for all of us... but our bosses President Carlo Katigbak @clk117, Chairman Mark Lopez, our News head @gingreyes, tita @cvvidanes & direk @dyogilaurenti were there to lead us and give us strength during these challenging times. Our fellow employees were in tears but remained solid and united with hearts burning. . Hoping for a better days ahead. This too shall pass. God bless us all 🙏🏼 Maraming maraming salamat po mga Kapamilya ❤️💙💚 . #tvpatrol #starpatrol

“You can feel hearts burning, there was frustration, and there was hope,” she says. “There were too many emotions going on last night in the studio and the newsroom—from the bosses, employees and anchors and I.”

So much emotions in the newsroom and the studio 😢🙏🏼 The most painful part was when we were looking at each other with tears in our eyes and we could NOT even hold or hug each other for comfort because of social distancing because of Covid19. You know you needed a hug and a shoulder to cry on but you can’t touch or go near each other. We just looked deeply in the eyes of each other and somehow felt comfort in knowing that we were united as a Kapamilya. Even if the future looks uncertain, our hearts are full of hope that better days are coming and that ABS-CBN will be back on air one day to bring smiles to peoples’ faces again and to be in the service of the Filipino wherever they are in the world. 🙏🏼 Maraming salamat mga Kapamilya ❤️💙💚 Scenes captured from my phone 🙏🏼 @clk117 @cvvidanes @kuyakim_atienza @jeffcanoy @chiarazambrano @zenhernandez @bsaguinaldo @raphbosano @zenhernandez

Gretchen shares, “If you see the video of Kabayan [Noli de Castro] during the extro speech of TV Patrol, he almost broke down in tears. He told me he was really trying to keep it together but he was really about to cry.” It was written by ABS-CBN News and Current Affairs Chief Ging Reyes, who joined the company when it reopened in 1986 after the martial law shutdown. 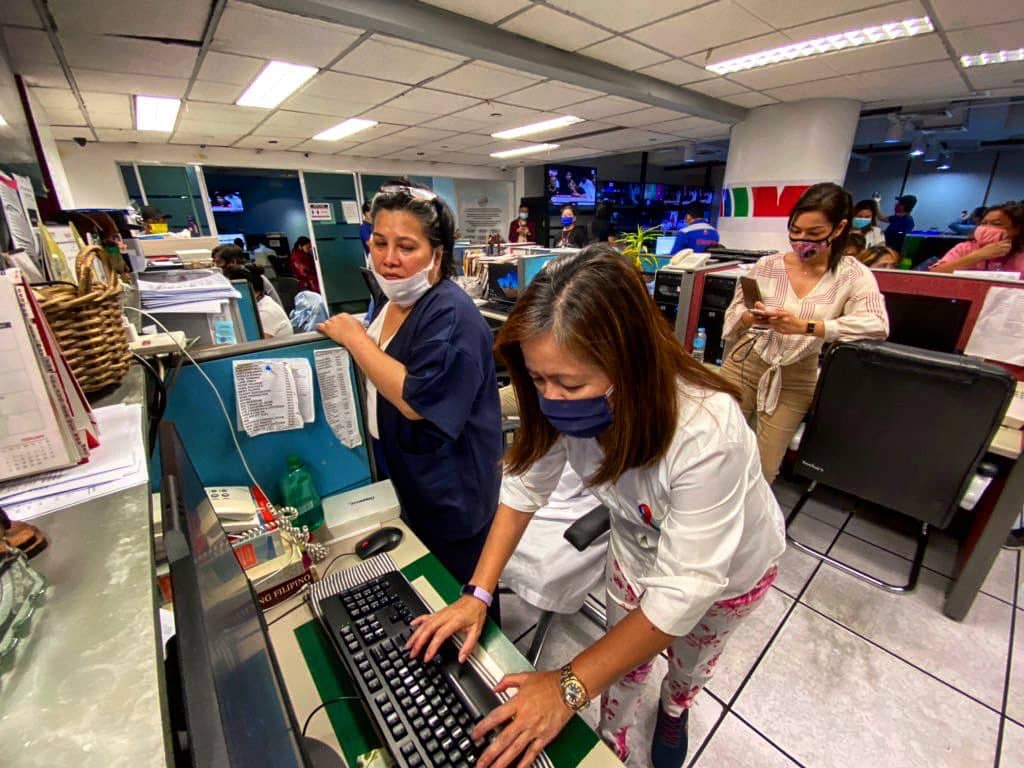 A post shared by Bernadette Sembrano-Aguinaldo (@bsaguinaldo) on May 5, 2020 at 8:12am PDT

Amid An Uncertain Future, Star Magic Artists Stand With Their Home Network

Everyone in the newsroom was trying their best to handle their mixed, heart-wrenching emotions that went from shock and belief to sadness, disappointment, and frustration. “It was unreal but it was really happening,” she says. “We all stood there and watched our bosses deliver their heartfelt speeches. You could see tears on the corners of everyone’s eyes. It was so hard to breathe because we were wearing masks, other TV Patrol and news employees really broke down crying.”

"Emotional in the ABS-CBN newsroom tonight. We can't even hug each other," ABS-CBN reporter Jeff Canoy tweeted this photo last night, May 5, when ABS-CBN signed off. | Photo from Jeff Canoy on Twitter (@jeffcanoy)

What made the situation even harder was the fact that this took place at the height of the COVID-19 pandemic, when they only found comfort in each other’s eyes and hopeful words as they had to follow social distancing protocols. “It felt cold. You feel you needed a hug and a shoulder to cry on but you can’t touch or go near each other,” Gretchen says.

However, in that moment, the thought that they were facing all of this as one family was enough to spark an atmosphere of hope in the entire room. “Even if the future looks uncertain, our hearts are full of hope that better days are coming and that ABS-CBN will be back on air one day to bring smiles to people’s faces again and to be in the service of the Filipino wherever they are in the world,” concludes Gretchen.

Got my first job as a Kapamilya during my sophomore year in UP Diliman. I got all my breaks here from being a UAAP courtside reporter for the UP fighting maroons in 2004 to 2007, ANC writer, weather girl & anchor, a talent of Star Magic, DZMM sportstalk & Chismax host, hosting a show called “The Wrap” on Studio23 & becoming a TV Patrol reporter in 2008 and anchoring for Star Patrol since 2010. ABS-CBN is the only company I worked for & literally my second home. I remember not taking day offs and working from Monday to Sunday & of course holidays. It was my life. I loved my job. It was a dream come true and an answered prayer 🙏🏼💓 I am forever grateful to be given all these opportunities and to have worked alongside the best of the best and forged friendships that would last a lifetime. Hoping and praying for better days ahead. Sending everyone a tight virtual hug 💓 Maraming maraming salamat po mga Kapamilya ❤️💚💙🙏🏼🇵🇭

Watch the heartfelt messages of ABS-CBN President and CEO Carlo Katigbak and ABS-CBN Corporation Chairman Mark Lopez in the videos below: