He's a K-Pop idol-turned-actor, and he's been dubbed as "Captain Korea"

Vincenzo is one of the most buzzworthy K-dramas today, and it's easy to see why. Not only does it have an interesting plot, its cast members—which include the handsome and sexy K-Pop idol-turned-actor Ok Taec-yeon—are also very talented and likable.

In Vincenzo, Taecyeon plays the role of Jang Jun-woo/Jang Han-seok, who's initially introduced to viewers as a happy-go-lucky and dumb intern at Woosang Law Firm where he works under Hong Cha-young (Jeon Yeo-been). Later, it's discovered that he's the chairman and CEO of a corrupt company called Babel Group, who's hiding his real identity with the help of his half-brother Jang Han-seo (Kwak Dong-yeon) that serves as his puppet. Jang Han-seok gets into a conflict with the lead character Vincenzo Cassano (Song Joong-ki), who is eager to expose his wrongdoing.

Taecyeon truly deserves credit for his portrayal of this villainous character that showcases his versatility.

In an interview 1st Look magazine, Taecyeon talked about his similarities with his Vincenzo character, saying, "Joon Woo shares so many similarities with my real-life personality that when I first read the script, I thought to myself, 'I have to do this role!' But as it turned out, Jang Joon Woo was a character with a wide variety of unexpected charms."

He adds, "Because he's a character whose personality switches back and forth between cold and warm, I've been spending a lot of time worrying about each and every little detail during filming, wondering, 'Will it look right if I express [the character] like this?' Because it's a kind of acting that I've never tried before, I'm curious to see how viewers react to this side of me."

If you can't get enough of this hottie, we've gathered some facts about him in the gallery below: He was born in Seoul, South Korea on December 27, 1988, making him 32 years old now. He’s Capricorn, and those under this sign are said to be responsible, driven, down-to-earth, and altruistic. 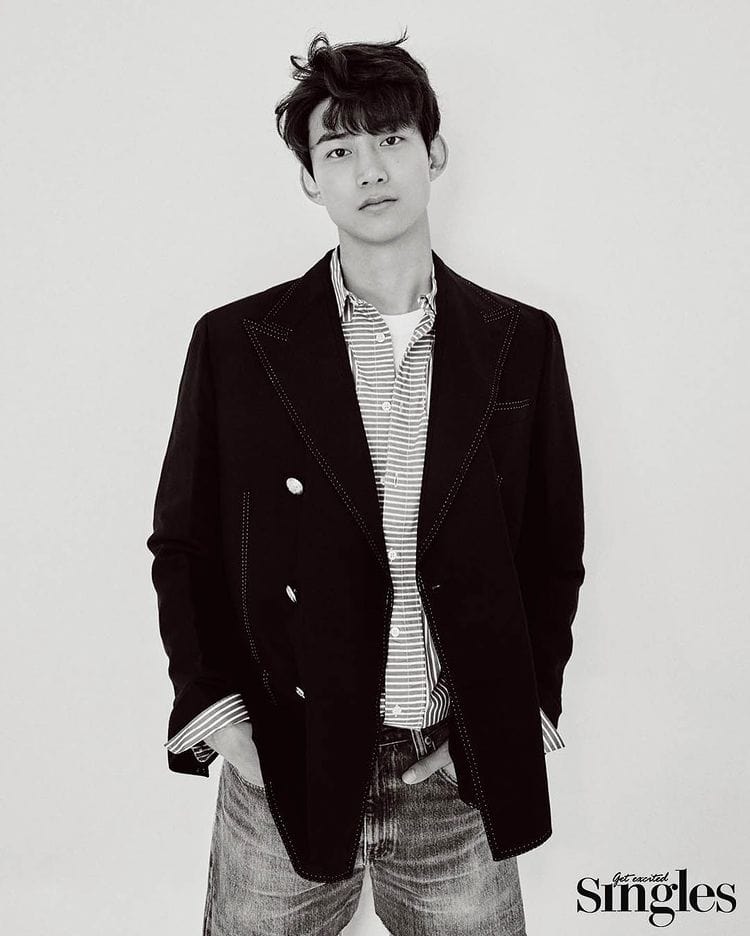 Their family moved to Massachusetts when he was 10.

He attended Bedford High School, where he’s said to have been active in extracurricular activities as a member of a jazz band and a soccer team, among others. And because they lived in the US for seven years, Taecyeon has become fluent in English (something he showcased in some scenes of the ongoing series “Vincenzo”); he’s also fluent in Japanese and, of course, Korean and even the Busan dialect. 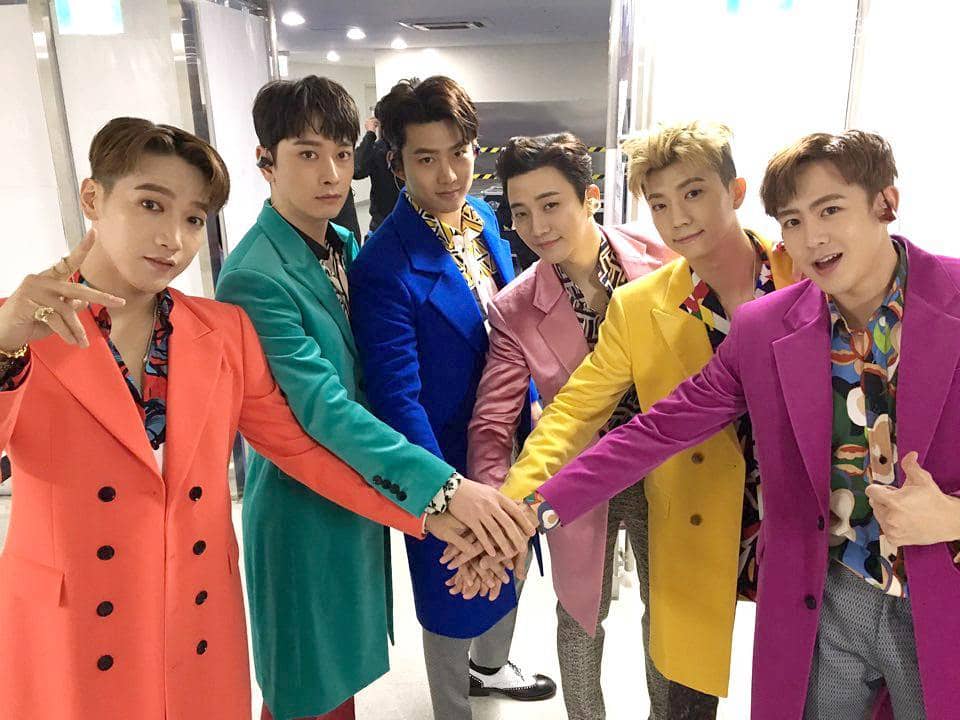 He was a member of K-Pop boy group 2PM.

It was his sister who encouraged him to audition for JYP Entertainment in New York back when he was 17 (on the day of his 17th birthday actually). With the promising career path that opportunity presented to him, he returned to South Korea. In 2008, he debuted with K-Pop boy group 2PM as its main rapper, sub-vocalist, and second visual. The band has been on hiatus since 2017, and in that same year, Taecyeon made his official solo debut. His 2PM co-members Nickhun and Chansung had cameos in Taecyeon’s latest K-drama, “Vincenzo.” 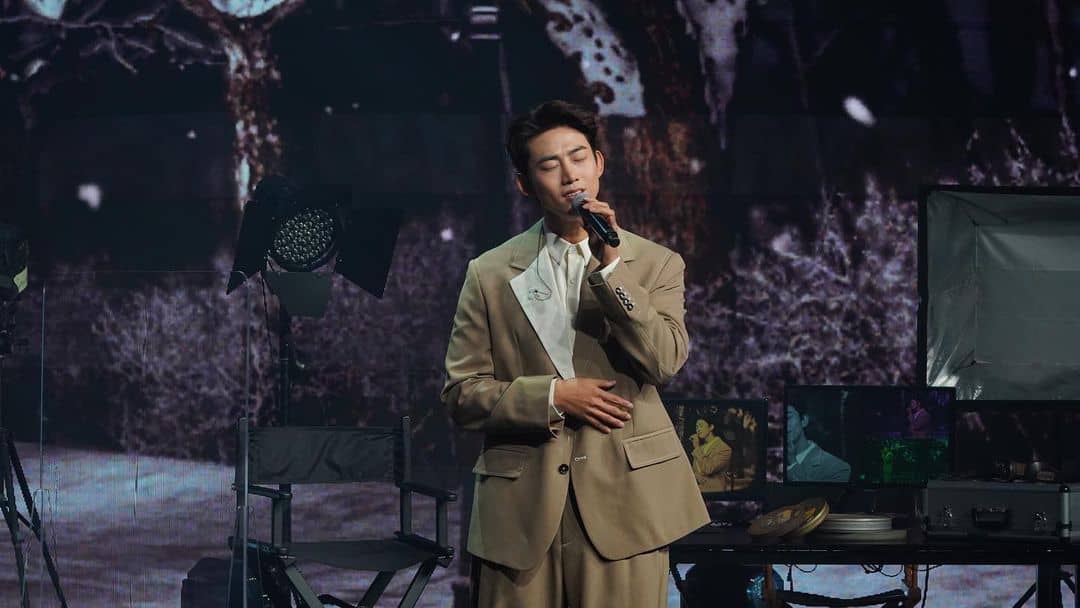 He has a solo Japanese album.

Shortly after he announced his solo career, he released a 10-track Japanese album, wherein the songs were penned by Taecyeon himself. 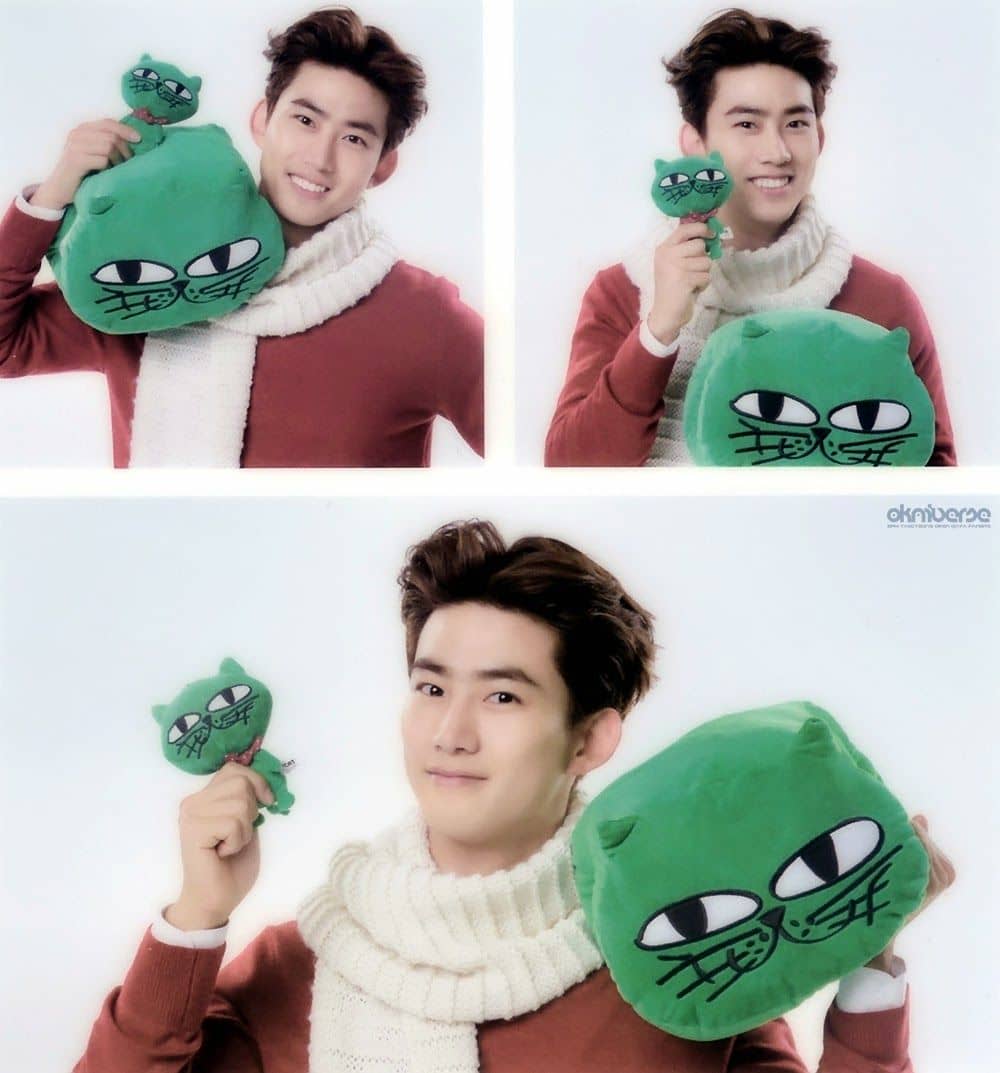 He studied business administration, and launched a business.

This talented artist has an entrepreneurial side, too. He took up business administration at Dankook University whose notable alums include Hallyu stars Ha Ji-won, Kim Hyun-joo, Lee Joon-hyuk, Park Bo-young, Rain, and his “Save Me” co-star Woo Do-hwan. Back in 2013, he launched a business called OKCAT and served as its CEO. OKCAT is a character that Taecyeon liked to draw ever since he started his entertainment career, and it was released as emoticons on the mobile messaging app Kakao Talk. Products that feature the OKCAT image were also released. When Taecyeon’s contract with JYP Entertainment ended, he signed with actor So Ji-sub’s agency, 51k, but the former continued to support him and still considered him a member of 2PM; to this day, in fact, 2PM's Instagram account (@real_2pmstagram) would still post photos of Taecyeon from time to time. Other artists under the 51k management are Cha Hak-yeon (also known as N from K-pop boy group VIXX), Lee Seung-woo (“Hush”), Kim Doh-yon (“Men Are Men”), and Shin Jun-seop (“One Fine Week”). Taecyeon’s first foray into acting had him taking on a supporting role in the K-drama “Cinderella’s Sister.” It’s been one lead role after another since then, with small screen projects like “Dream High,” “Who Are You?,” “Wonderful Days,” “Assembly,” “Bring It On, Ghost,” and “Save Me.” His small screen comeback after fulfilling his mandatory military service was “The Game: Towards Zero.” In between these K-dramas, he also worked on films “Marriage Blue” (2013) and “House of the Disappeared” (2017) which earned him a Popularity Award at the 2017 Korean Film Shining Star Awards. He also worked on TV films, web series, and variety/reality shows including "Inkigayo," "Family Outing 2," "We Got Married" (with Taiwanese actress Emma Wu), and "Three Meals a Day." He enlisted in the military in September 2017.

He was supposed to enlist years prior, but when he had his physical examination for drafting, the result only allowed him to become a public service personnel due to his poor eyesight and dislocated shoulder. So, in 2012 and 2013, he underwent surgery to have his arm treated (he got injured when he was arm wrestling with his 2PM bandmates). He was cleared to become an active duty soldier in December 2013, but he decided to delay his enlistment because of work. Taecyeon enlisted as an active duty soldier in 2017, and was later promoted as a Sergeant and recognized for his exceptional conduct as a military instruction assistant at the 9th Armed Forces Division in Gyeonggi Province. He was even awarded as “Model Soldier” by the Ministry of National Defense. He got discharged in May 2019, and he’s the first 2PM member to finish military service. 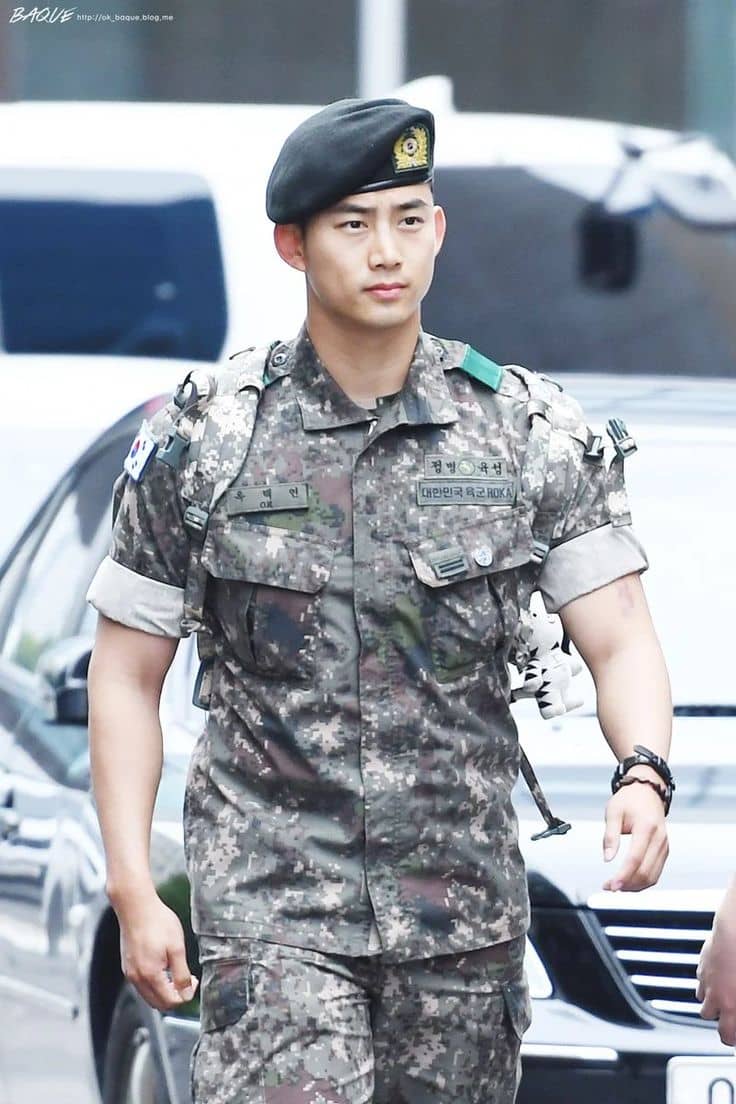 He was dubbed “Captain Korea.”

Taecyeon shared that while he was in the military, he earned the nickname “Captain Korea” because his looks and physique were thought to resemble that of “Captain America” Chris Evans. 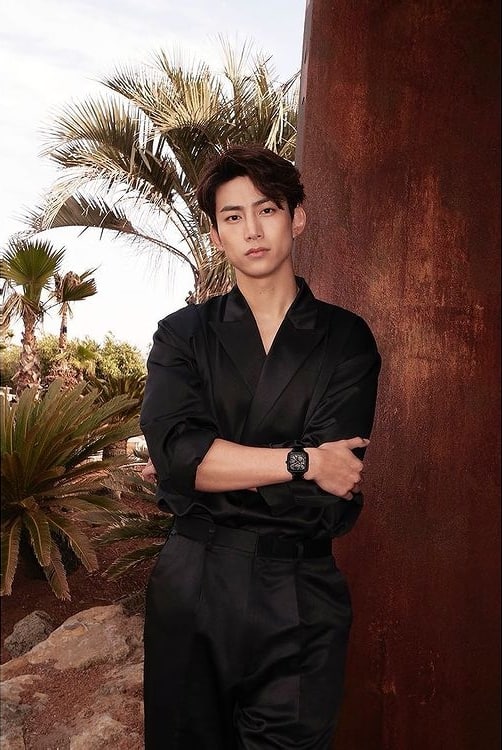 With his dapper wardrobe of tailored suits for his current role in “Vincenzo” as a huge company’s chairman and CEO, his tall physique is even more noticeable. Taecyeon is 6’1”. 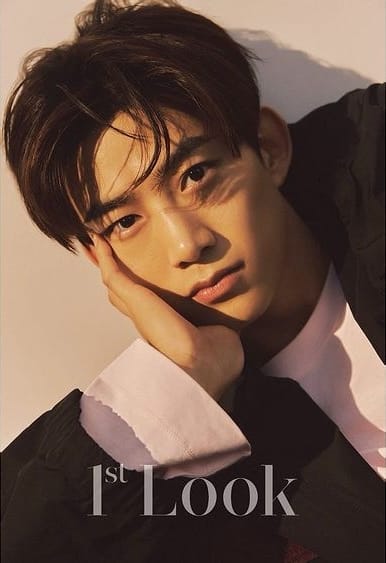 If you aren't following him yet, do so now! His verified Instagram account is @taecyeonokay, and he's on Twitter, too (@taeccool) since 2010. His IG, which he started in July 2019, shows that Taecyeon's quite a fun-loving individual who's into posting food shots and photos of his dog. He’s in a relationship.

It was revealed last year that he is currently in a relationship with a non-celebrity girlfriend. In an exclusive interview with Sports Chosun, Taecyeon's close friend said that his girlfriend is three years younger than him and that they've been dating since 2017.

Vincenzo is available for streaming and download via Netflix.

Lead photos from Rado and Singles

Seo Ji-Hye And Kim Jung-Hyun Are Reportedly Dating—Could They Be The Next CLOY Co-Stars To Become A Real-Life Couple?