Two weeks after celebrating his birthday, he breathed his last

Miguel Alvir Barretto—husband to Estrella Castelo and father to seven children including showbiz sisters Gretchen, Marjorie, and Claudine—passed away on the morning of October 15, Tuesday.

The news was first confirmed by Claudine who posted an Instagram story in black and white, showing a moving image of a candle with the caption, "Never knew I could hurt like this. Goodbye daddy."

A few hours after her first post, she shared a clip of her mother addressing the family in what could have been Miguel's hospital room, telling them the story that she had told her husband to "fly" and "soar" minutes before he took his last breath.

We luv u Dad

Soon, other members of the Barretto family began to share their own tributes for the patriarch who had been at the center of their family through their ups and downs.

Marjorie Barretto, mom to showbiz personalities Julia, Claudia, Dani, posted a series of photos showing her father sharing tender moments with his grandchildren and herself, and accompanied it with a caption wishing him a joyous, restful afterlife in heaven.

Meanwhile, new mom Dani Barretto focused on her memories of her grandfather being there to welcome her newborn girl Millie into the world. Dani's daughter's birth made the Barretto clan a family with four living generations able to enjoy each other's company.

On Instagram stories, the first-time mom posted a photo of her grandfather gamely taking a picture of his great-grandchild in her carrier along with a promise that she will always tell Millie stories of him, despite him no longer being around.

Dani's husband, Xavi Panlilio, also took the time to share one of his best memories of his grandpa-in-law; he talked about how Miguel, who he nicknamed "King," had actually showed him a photo of Dani even before he had met her.

The young Leon Barretto called his lolo a gift from God, and shared his favorite photos of him with his Instagram followers. 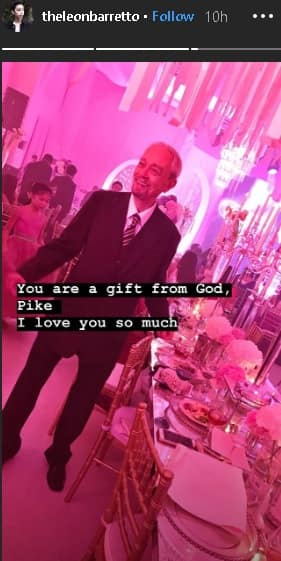 Claudia, a singing sensation on the rise, also took to social media to pay tribute to her grandfather by posting some of her favorite photos of him. A mix of solo photos and photos with her, including one where they share a tight embrace in her debut not too long ago, the series of Instagram stories shows just how close they were. Before his passing, Miguel was able to celebrated his 82nd birthday at his daughter Marjorie's home on October 6, not knowing that it would be the last big family event that he would be a part of. Marjorie recounted that he was rushed to the hospital seconds after blowing his cake's candles, and that he would continue to deteriorate after that day.

"After that day, its been a series of ambulance transfer, family meetings, non stop praying, and big family gatherings at the ICU waiting area. All throughout this ordeal, a lot of love and support has been shown to us, most especially to our wonderful Dad," she wrote.

Exactly one week ago today, we were celebrating my Dad’s 82nd birthday over lunch in my house. Right after the blowing of the candles on his cake, he took a nap and fell very ill. My siblings and I rushed him to the nearest hospital, i could say it say it was the scariest time for us all. After that day, its been a series of ambulance transfer, family meetings, non stop praying, and big family gatherings at the ICU waiting area. All throughout this ordeal, a lot of love and support has been shown to us, most especially to our wonderful Dad.Im just feeling sad today, realizing its been a week, and I guess we are all emotionally and physically tired, but our faith, hope and unity as a family is stronger than ever. May I kindly ask for more prayers for our Dad. That he gets better soon. And that God willing, we get to spend more birthdays with him❤️🙏🏻❤️

One of the last photos of Miguel to be shared with the public was posted by Claudine. It shows him with his childhood friend as he sits propped up on his hospital bed, three days before his passing.

Best friends since Grade school. 70years of friendship that u can only pray for.was not going to post this but my Dads face lit up when his bff Tito TONY SYAP spent his birthday with my Dad.thank u Tito Tony. #huckleberryfriend

Miguel's cause of death was not identified by anyone in the family.

To Miguel's family, our deepest condolences and sympathies.

A Look Back On The Life Of "Queen Of Soul" Aretha Franklin, Plus All The Celebs Who Paid Tribute To Her