Metro At 30: Angel Aquino Shares The Secrets Behind Her Timeless Beauty

No beauty shines brighter than a good heart. "Have courage and be kind," says Angel of the important realization she has made in her life now

“A Metro woman is someone who knows herself very well and is okay to make mistakes because she knows that she’ll get up from them. She’s someone who inspires other people, other women because of her strength, kindness, and beauty, may it be outside and in,” seasoned model and award-winning actress Angel Aquino shares.

Angel is known as an actress whose character portrayals exceed expectations, a woman who is confident about herself, and above all, a person whose kindness simply shines through wherever she goes.

On being a Metro woman

Reminiscing her first Metro cover shoot that was shot in Vigan by renowned photographer Neal Oshima, she begins to share with Metro.Style, “The sun was going down on us. I didn’t do any night shoots because I had to leave and catch the bus back to Baguio. I still had some exams to finish and I was still in school, so we had to wrap up already. The photographer was already in a bad mood and I remember he was telling me as I stood there, wearing a Valera Filipiniana with beads hanging on this black Comme des Garçon shift dress, my hair was all over the place and the sun was on me, 'Just stay there, don’t move.' That’s when he brought out the big camera and just caught that moment and that made the cover. I didn’t know that I was going to make the cover, I thought I was just doing a photo shoot for Metro. It turned out to be quite epic—monumental rather.” Once you see the cover, you'll understand why it's her most memorable shoot to date.

Being a Metro cover girl made Angel see herself as an individual who’s capable of doing great things. She says, “When an important magazine puts you on the cover, and always want you to be a part of it, that somehow validates you as a woman or as a person. I’m just so thankful that Metro is the one that somehow made me think of myself as someone who has a story to share.”

Now that Metro is celebrating its 30th anniversary, she hopes for the magazine to stay around, "to be there for women, to cheer them on, to always empower them because Metro has empowered me. I hope that Metro stays much longer to inspire more women and push them to always be moving forward.”

When an important magazine puts you on the cover, and always want you to be a part of it, that somehow validates you as a woman or as a person. I’m just so thankful that Metro is the one that somehow made me think of myself as someone who has a story to share 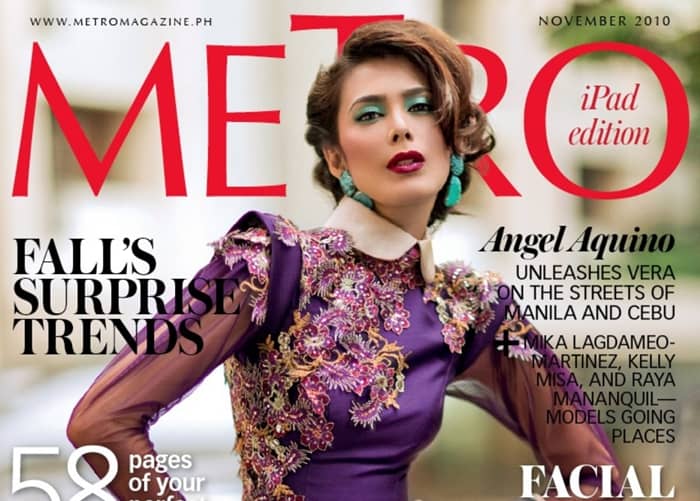 Angel's first Metro cover was for the magazine's November 1994 issue. It was photographed in Vigan by Neal Oshima. At the time, Angel was still an up-and-coming fashion model. Angel started her showbiz career sometime in 1999 with TV projects like "Wansapanataym," "Tabing Ilog," and "Isusumbong Kita sa Tatay Ko." Come 2001, she has established herself as a host via the weekly lifestyle magazine television program "F!" She shared the Metro cover spot with her fellow "F!" hosts Amanda Griffin and Daphne Oseña in June 2003. Another Metro group cover that featured Angel was this one in October 2005 with Angel Jacob and Iza Calzado. 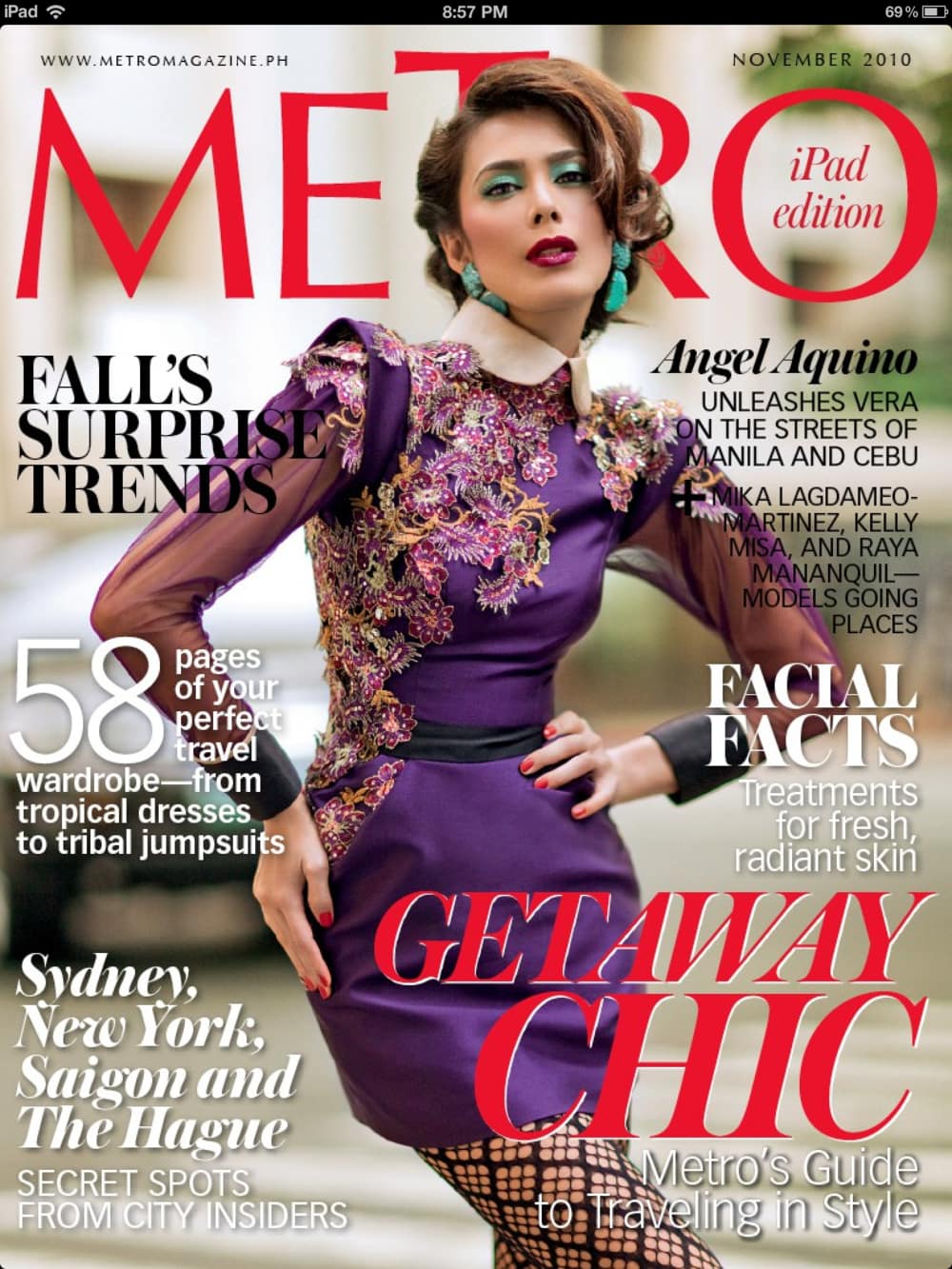 In 2010, she starred in the teleserye "Magkaribal" as antagonist Vera Cruz-Abella alongside Bea Alonzo and Gretchen Barretto. This major role earned her another Metro cover for its November 2010 issue. After impressing viewers with her character portrayal in "Magkaribal," Angel became one of the most sought-after kontrabidas in local showbiz. Here, Metro named Angel, Gretchen Barretto, Eula Valdez, and Agot Isidro as "TV's most glamorous antagonists" for its October 2013 issue.

On her showbiz career

From being a fashion model, Angel became an actress and a television host. With her beauty, talent, and personality, she evolved to be one of the most inspiring women in local showbiz. Her journey in showbiz has helped make her the brave and confident woman she is now. "I was a very shy person," she admits. "I didn’t think I could do those things—that I could be in front of a camera. So when Jeffrey—the first person who discovered me said, ‘Alam mo you’re very self-evasive. You don’t have faith in yourself.’ That challenged me to do whatever I can in every opportunity that I face." She took on the challenge and improved herself by learning from the people she worked with, allowing her to gain self-confidence in the process.

“Everything I learned along the way, I did not have any [professional] background on and I did not take any workshops or seminars for modelling or acting. Basta ‘yun lang, I was just observing people and I was just taking advice from my mentors—people who took care of me then. And somehow I’ve gotten this far and I’m still doing it.”

With all the years of working with the biggest and brightest stars in the industry, one of them definitely inspired her to step out of her shell in terms of acting. “The person who really surprised and inspired me after working with her was Ms. Vilma Santos. I only had a scene with her but she was the most honest and so giving. She thought my voice was too weak so sabi niya, ‘you know, the only problem you’ll have is your voice so start working on that.’ Maybe my voice was weak or too soft? I will never forget that night I acted with Vilma,” Angel says of the veteran actress who she got to work with in the Chito S. Roño film Bata Bata Paano Ka Ginawa?

Asked about a memorable movie line that would perfectly capture her life right now, she shares, “Have courage and be kind,” which is an iconic line from Cinderella. “After I heard that, I remembered my daughters. These are the two words that you should always remember and always follow in life. Have courage and be kind.”

Have courage and be kind

On Angel: White shirt by Carolina Herrera in Greenbelt 5, black tuxedo blazer and tulle skirt by Patty Ang via www.pattyang.com, and wide-legged trousers by Paul Smith in Greenbelt 5 | Photo by Dookie Ducay

It's a message that she not only meant for her daughters to live by, but a reminder for herself as well. "Courage was something I did not have before, or maybe, I did not know I have it but I knew I was kind. As I grew older, I realized it’s harder to be both courageous and kind because there are so many things that are going through in your head," she explains.

As years went by and she saw time take its toll on her body, she admits that sometimes it’s unavoidable to not think about the physical changes that dull her spirit. "You think about mortality, you think about wrinkles and not looking your best anymore. These are things that can break your spirit if you let it." But at the end of the day, she's not one to let aging stop her from doing more of the things that make her happy.

Whatever happened in the past, she uses as a source of strength and motivation as she moves forward into the future. “Life is always out to test you and break you, so don’t let it," Angel advises. "Before, you can be more accommodating but now you just don’t care anymore, now that you know what you want and who you are. Sometimes you have to know when it’s worth looking into—which ones are worth your time, kindness, and attention.”

Life is always out to test and break you, so don't let it

Even in a room full of people, it's hard to miss Angel in her laid-back outfit with just shirt, shorts, and sneakers. Her effortless beauty radiates from within as she flashes a smile, "All my clothes at home are shirts, pants, jackets, and shorts. I love wearing shorts because they’re just so comfortable and mostly slippers or loafers. So if you ask me what my personal style is, it’s always comfort before style."

The 46-year-old actress stays in shape through barre training. This workout combines three fitness disciplines—ballet barre, pilates, and yoga. She says, "I love how you’re with a group of women but you’re focusing on what you can do and how it’s working for your body. In the end, you’re thankful that you gave yourself an hour for the strength and life."

During her days off, she also indulges in much-deserved me-time and rewards herself with a bottle of wine, saying, "When one of my girls would be in school and the other one would be at work, make time to enjoy and drink wine, and just really feel that I’m being kind to myself." Not missing the opportunity to ask how this ageless beauty manages to keep her body in tiptop shape and her skin glowing, her secret was just plain and simple: "Just take good care of yourself and let life happen. It’s an everyday battle but you just have to beat it and own your age, body, and self."

Just take good care of yourself and let life happen. It’s an everyday battle but you just have to beat it and own your age, body, and self

Angel, who is currently a part of the consistently top-rating TV series FPJ’s Ang Probinsiyano, is grateful for the small and big things that has so far happened to her this 2019. "So far, this year has been very generous... But I do believe that there is no best year. There’s always some good and bad and you just have to treasure the good ones."

But above all the blessings she receives every year, what she looks forward to the most is seeing her daughters grow as the women she hopes them to be. The proud mother shares, "You know, I get a sneak peak of that every year and I feel like I don’t have to worry too much because they are okay. They’re growing to be good people and that’s really my ultimate goal. To raise good people and to somehow—in their own corner—make the world a better place."

Sometimes you have to know when it’s worth looking into—which ones are worth your time, kindness, and attention

Who Would Be Perfect As Kim Soo-Hyun's Next Leading Lady?

The Ultimate Gentlemen: Here Are The Top 10 #MetroSocietyBestDressedMen