Metro At 30: Iza Calzado Can't (And Won't) Stop Talking About The Importance Of Self-Love

This Metro cover star says, “I think loving myself is acknowledging I am this energy that I would like to believe can bring light to the world"

A lot has changed with actress Iza Calzado since her very first Metro magazine cover back in 2005. She not only got married to Ben Wintle, but has also finally come to terms with herself. She has been a well-loved advocate of women empowerment, passionate about issues on self-love, body positivity, and equality.

Going through this journey is one of the biggest challenges she has ever had to face. “It’s breaking that mentality in my head that I’m not enough,” reveals Iza, expressing gratitude for having been able to overcome that struggle. “I always think when I’m challenged, it brings out the animal in me. That’s why it’s a challenge, it can only bring out the best in you. I think when a situation is challenging, I will always come out of it a winner, not necessarily because I’m successful, but because I will learn something from it.”

For her, self-love is “accepting yourself physically, emotionally, mentally, embracing it, and through that, thriving in life.” It’s all about living your best life as you grow older.

“The fact is, one day, I will be gone and if I didn’t love myself enough and I didn’t live my life to the fullest, then it is a waste of a blessing and of this life force that was given to me,” she tells Metro.Style. “I think loving myself is acknowledging I am this energy that I would like to believe can bring light to the world. But in order for me to do that, I have to love and embrace myself. 'Yung mga pinagdaanan ko, kasama siya sa package so I have to embrace it fully—and there lies the secret to success.”

I think when a situation is challenging, I will always come out of it a winner, not necessarily because I’m successful, but because I will learn something from it

Iza Calzado, Kimi Juan, And Nikko Ramos On Dealing With The Pressures Of Social Media Culture 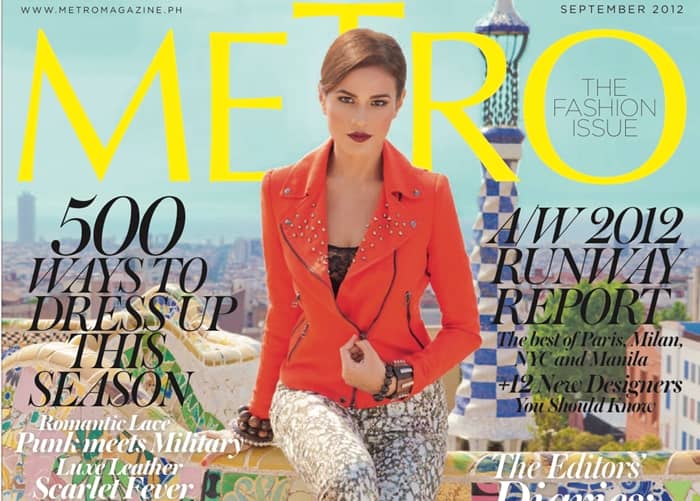 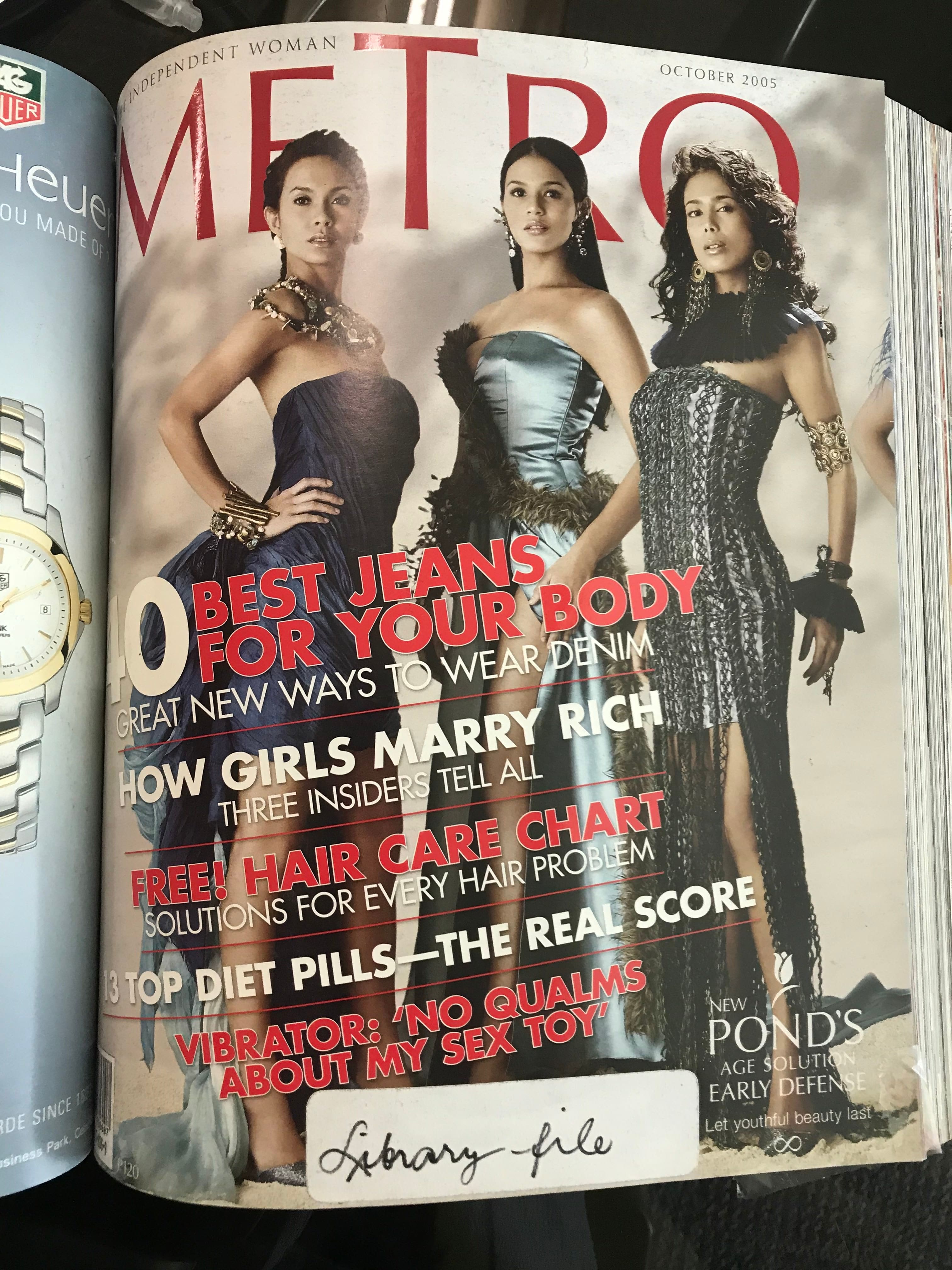 Iza Calzado was featured on the cover of Metro magazine's October 2005 issue alongside Angel Jacob and Angel Aquino. That year, Iza starred in two of her most memorable projects, TV shows "Encantadia" and "Etheria." Iza Calzado was featured on the cover of Metro magazine's May 2011 issue. Here, she was photographed in the most covetable designer creations, showcasing her versatility as a fashion muse. 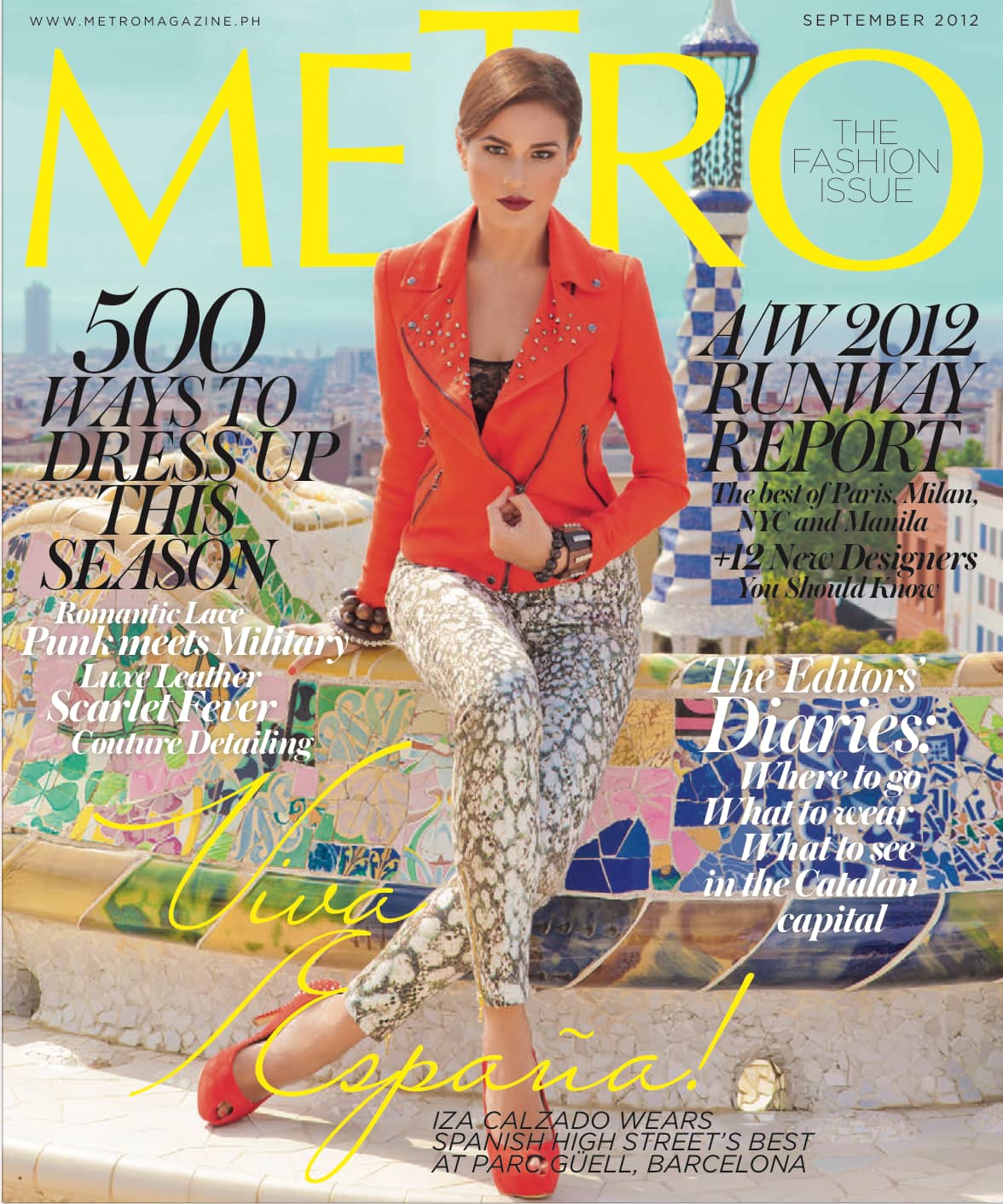 In this Metro magazine cover feature, Iza Calzado and the Metro team flew to Spain to capture the best of Barcelona. Featured alongside other big celebrities, Iza Calzado joined in the campaign to #GiveBack in time for the holiday season.

Gown by Mark Bumgarner and jewels from Orochina | Photo by Gee

Gaining perspective on this matter hadn't been easy. She had to go through a lot of self-doubt. She was pre-occupied with negative thoughts until she realized they're all pointless at the end of the day. “Before, I’d fight back. ‘How come I don’t look like this? How come I don’t look like that?’ I’ve had a lot of blame on other people when in fact, that’s just how life is,” she opens up. “I used to think na if I were thinner, I’d get this. If I were thinner, I’d be that. But no matter what your size is, if something is meant for you, it’s meant for you. Perhaps there’s an even better opportunity to make a difference because of my story.”

The actress is known for her involvement with She Talks Asia—an organization that supports women empowerment through multimedia content and conferences. This made a huge impact on the kind of woman she is today. “I think, now, I’m more aware about women’s issues. I’d call myself a baby feminist because I’m not the most well-read in that department but I want everybody to have an equal seat at the table—all genders, all human beings because we are one,” declares Iza. “I’ve always known that. I’ve always looked at people na pantay-pantay tayong lahat.”

She’s undeniably one of the most admired and respected people in showbiz, so Iza makes sure she uses that influence for the good of others. “If you have some power, then your job is to empower somebody else,” she quotes Nobel laureate and Pulitzer Prize winner Toni Morrison, adding that your purpose has to go beyond yourself. “It doesn’t stop with you. You were blessed, ‘yun na ‘yun? Hindi eh. Kapag biniyayaan ka, ikaw ngayon, trabaho mo na maging biyaya rin sa ibang tao. Feeling ko, if you don’t use your platform to create social impact, to make this world—kahit na my community or the country—a better place, sinayang mo 'yung pagkakataong ibinigay sa iyo ng Diyos.”

"If you have some power, then your job is to empower somebody else," Iza quotes Nobel laureate and Pulitzer Prize winner Toni Morrison

Iza couldn’t be more thankful for having found that inner peace, because it helps her pursue more of her dreams and improve in her craft. “I’m calmer now. I’m more appreciative of every opportunity that comes my way, which also is part of aging,” she points out. “It’s humbling because when you’re in your 20s, you think it’s never going to stop, you’re invincible. It’s one after the other. In your 30s, there are things that slow down, there are things that pick up, and it’s part of the evolution.”

2019 has had a lot of surprises for her career. “Projects kept coming in one after the other. I did Cinemalaya (Pandanggo sa Hukay), I did an iWant series, tapos I just finished a film and I shot another one in New York. I have two Ricky Lee scripts this year,” she shares. “That was totally unexpected. Para sa aming mga artista, hindi mo naman mapa-plan eh. It’s not like two years beforehand, sinasabihan ka na ito 'yung gagawin mo, so you have to let it surprise you, you have to let it do that. It’s been a delightfully surprising year.” She has had an amazing, event-filled time in Milan as well recently, attending the Fashion Week shows of brands like Louis Vuitton, Prada, Furla, and Tod's.

What's next for this talented actress is the Metro Manila Film Fest (MMFF) entry Culion, which was written by Ricky Lee, directed by Alvin Yapan, and had Neil Daza in charge of cinematography. The  film, which focuses on an island in Palawan that is known as the biggest leper colony in the world, also stars Meryll Soriano and Jasmine Curtis Smith.

In the next five years or so, Iza still sees herself thriving in the same industry, while pursuing other passions that are close to her heart. “I pray that I’d be given a chance to represent the country well in whatever way that may be. It could be in acting, it could be through my advocacy work—I just want to make sure that I represent the Philippines in a very positive light,” she says. Of course, she’s also looking forward to starting her own family. “I’m sure my husband would like to see some little kids running around. I hope that God grants us that gift.”

I pray that I’d be given a chance to represent the country well in whatever way that may be. It could be in acting, it could be through my advocacy work—I just want to make sure that I represent the Philippines in a very positive light

EXCLUSIVE: Iza Calzado Writes About Her Personal Struggles With Her Body And How She Is Overcoming Them

EXCLUSIVE: Kathryn Bernardo Talks About New Projects, Growing Up, And A Certain Future With Daniel Padilla