Metro At 30: Judy Ann Santos-Agoncillo On "Real Happiness" And What She Dreams To Accomplish

In a busy ballroom housing sixty or so people, it’s not difficult to single out Judy Ann Santos’ laugh—it’s bright, it’s warm, and, most of all, it’s contagious. After a long day of being photographed, basking under hot lights, and having her makeup retouched several times, Judy Ann—or Juday, as she is lovingly known in every household in the Philippines—slumps against a couch and lets out a sigh of contentment. She’s been on her feet for hours, but her energy shows no signs of slowing down. She’s still as effervescent as she’d been at 10 in the morning, and her presence is still incredibly warm and inviting even at day’s end. “I’m happy when I see that people are happy to see me,” she shares. “I’m happy when I make people laugh.”

And she does—through her movies, her on-camera interviews, and most recently, her cooking videos on her YouTube channel, Judy Ann’s Kitchen. First gaining recognition as a dramatic actress through teleseryes like Mara Clara, Judy Ann has since proven that she’s also got comedic chops and is leading lady material, too! After a guest stint on FPJ's Ang Probinsyano, Judy Ann returns to primetime television via Starla, where she’s got audience’s hearts in the palm of her hand. As a bida-kontrabida, her work here is twofold: she has to gain sympathy from viewers, and then twist that sympathy into something closer to anger, as effortlessly as possible.

This duality isn’t something many actresses, her contemporary or otherwise, can swing. It takes someone of Judy Ann Santos’ calibre to successfully let go of the stereotypes people have come to associate with her as an actress, and bring something completely new to the table. Judy Ann is rarely ever typecast—she’s done drama, comedies, romantic comedies, even biopics, after all—and her ability to portray one role entirely different from the next is a singular talent not many people possess. And still, she wants people to remember that she’s as normal as any other person out there. “I’m not perfect,” she says. “Normal na tao lang naman ako, nabigyan lang ako ng chance to be able to try it out in the showbiz industry and I got so lucky. I love it. That’s why I try to hone my craft, evolve myself, and really go with the flow.”

First appearing on the cover of Metro in 2002, Judy Ann has been witness to the magazine’s growth as well as—and perhaps most importantly—her own. She admits that she never thought she’d ever be on the cover of a magazine, let alone on one of the most sought-after front pages in the country. “It tickles me kapag alam kong magko-cover ako ng Metro magazine. For someone like me who’s never confident with how I looked when I was younger, of course it’s a big deal for someone to call me up and tell me that they want me to be their cover girl.” Her journey is well-documented in these magazines’ glossy pages—“from conservative, to daring,” she says—and she’s even been on the cover with who else but herself (check the gallery below to see this Metro cover). “I give my whole trust to the whole team,” she says of the cover shoots. “I love doing shoots for Metro. They see something that I don’t, eh.” 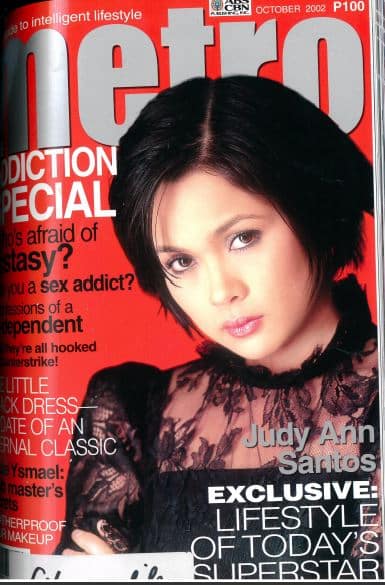 Dubbed as "Today's Superstar," Judy Ann was featured on Metro's October 2002 issue. It was an eventful year for her with several projects that included the film "Magkapatid" with Sharon Cuneta and the TV show "Sa Puso Ko Iingatan Ka" with Piolo Pascual. 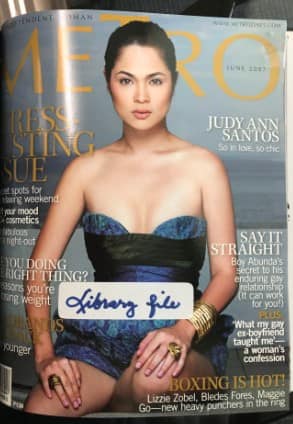 Judy Ann on Metro's June 2007 issue. In 2007, her famous teleserye "Ysabela" was launched. She also starred in movies "Ouija" and "Sakal, Sakali, Saklolo." Judy Ann was "older, wiser, and aiming higher" in this Metro February 2008 issue. Her movie, "Ploning," was released in 2008, and she received numerous acting awards for it. Judy Ann starred on the cover of Metro's 20th anniversary issue with a side by side concept. That same year, she was working on the rom-com TV series "George and Cecil" with husband Ryan Agoncillo. 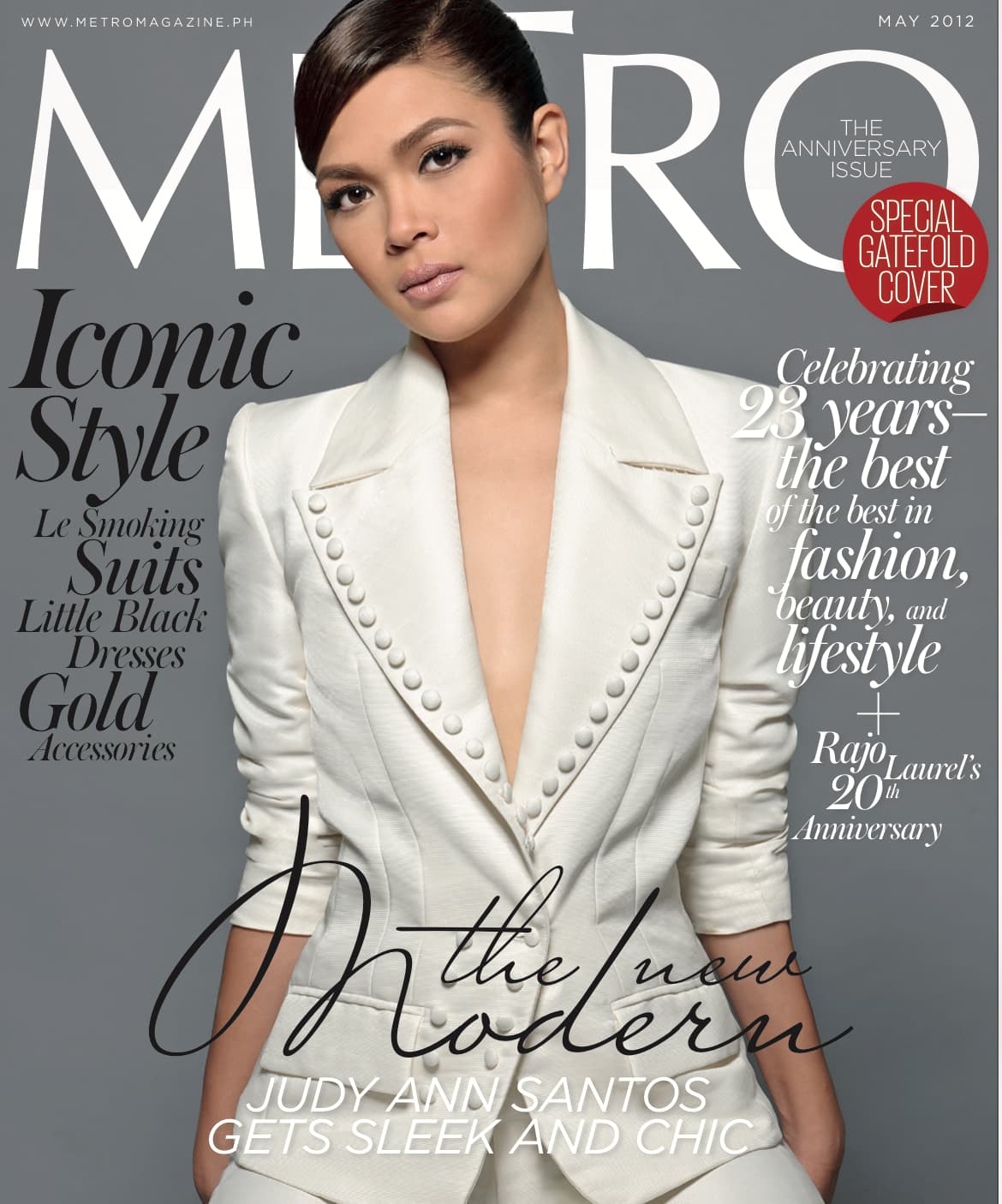 In all her years in the business, Judy Ann has learned to be unapologetically herself. It was right around the Mara Clara era when she was able to answer a reporter’s remark about her looks—how she’d looked something like a siopao, or an aparador, she recalls. “Eh totoo naman po,” she had retorted then.

She doesn’t mince her words. She knows what she’s about and it’s taken her decades to get to this place, and it shows. And how gloriously so, too. “Katawan ko naman ‘to, bakit sila affected? After that, I felt good because I was able to say my piece,” Judy Ann tells Metro.Style. She admits she’s glad that nowadays, there have been strides, leaps, and bounds when it comes to discussing self-love and self-acceptance. “I don’t please anyone,” she says firmly. “I please myself. But of course, now it’s a different scenario because I have a family. I have my husband, I have my kids. But when it comes to myself, whatever I want to do, I try to do it as much as possible because that’s the only time where I can tell myself na, ‘Deserve natin ‘to.’”

“I don’t please anyone. I please myself... whatever I want to do, I try to do it as much as possible because that's the only time where I can tell myself na, 'Deserve natin 'to'

On Judy Ann: Tweed blazer and trousers by Erwin Flores and heels by Paul Andrew | Photo by Dookie Ducay

When someone has been working as hard as Judy Ann her entire life—starting out in show business at the tender of age 7—one may wonder where she gets her strength from. Easy: her mom, her husband, her children, and a couple of public figures she shares the showbiz industry with. “It’s very hard, now that I think of it, ngayong nanay na ‘ko. Warrior siya,” Juday says of her mother. “She’ll really sacrifice everything for us.”

“There’s Ms. Maricel Laxa-Pangilinan,” she adds. “Sobrang laking inspiration niya sa ‘kin. I admire how she handles each and every child, how she has her own career, how she’s able to help people, encourage people, mga talks nila as a family. Napakasarap niya kasing kausap eh. You really learn something from her.”

“I love Tita Susan Roces, from the first day I was able to work with her in our Mano Po days up to now working with her in Ang Probinsyano. She’s still the same. She’s the elegant, professional actress that every person should look up to in this industry. She knows what to do. She’s very professional. She knows how to take care of the people behind the cameras. Wala kang laki ng ulo na makikita sa kanya.”

It’s very hard, now that I think of it, ngayong nanay na 'ko. Warrior siya. She’ll really sacrifice everything for us—Juday says of her mother

You may be wondering, too: does an actress as bright and as brilliant as Judy Ann Santos still get starstruck? “Oh yeah,” she says. “Oo naman.” The first time she saw Regine Velasquez-Alcasid, she shares, she wanted to make her sing just so she can hear Regine’s voice for herself. Whenever she sees Martin Nievera or Gary Valenciano on stage, she’s left awestruck. She lists veterans of the industry: “Gloria Romero, Eddie Garcia, Tito Dolphy. Napansin ko nga, every person I look up to… these are the celebrities na talagang haligi ng industriya. Vilma Santos, Nora Aunor,” Judy Ann says. “I admire how they’re able to hold onto their craft.”

Fans of the Queen of Teleserye must also think the exact same. “I’ve been through a lot,” Judy Ann says of her time in the industry. She’s asked whether there’s a movie line that can sum up where she is now in her life. Her answer holds so much, and is as insightful and as profound as the person giving it. “Nasa stage ako ng buhay ko na hindi na siya applicable sa movie. It’s just so real. It’s not movie-like. It’s real happiness. Siguro kung may kanta pa,” she offers instead. “Siguro ‘yung ‘Shine.’ I never thought I’d stay here this long. Hindi ko naman naisip na tatagal ako nang ganito. Whenever I hear the word ‘shine,’ nao-overwhelm ako. Siguro nga I’ve done something good for me to be able to stay in this business for such a long time.”

We ask her, then: is there anything else she wants to do, aside from acting?

Of course, Judy Ann has already built something, figuratively speaking: a kingdom for herself, as a movie and teleserye queen. But even more than that, she’s built a safe, loving community in the entertainment industry, and it’s the legacy she hopes to pass onto young actors. “Sa work, ayaw mo nang makadagdag sa stress at pressure ng tao,” she says. “I go to work and I make it a point to finish my whole day na masarap ang feeling ng puso ko. I make sure that I’m able to care for the people that I work with. To make them feel na they matter to me. Whatever role they play in that particular work I go to, it doesn’t matter if you’re the producer or you’re the utility guy. You matter to me, and I will make you feel that.”

“‘Yun lang!” she ends, mimicking a bow, her playful demeanor never letting off. Here is a woman, indeed—an actress, a powerhouse, a soul—who has made it her mission in life to make people happy, as it gives her joy in return, too. “And I thank you.” With her heart, her talent, and her bright, warm, contagious laughter, it’s clear as day: Judy Ann Santos is shining and will continue to shine for years to come, and we thank her, too.

Nest Manila Helps You Turn Your House Into A Home