Metro At 30: Lucy Torres-Gomez On “Editing” Your Life To Make The Most Of It

The wife, mother, and public figure shares, "When I think of a Metro girl, I think of somebody who is empowered. Somebody who acknowledges that time is her greatest asset and as such, she's able to edit her life or her day”

Just as the perfect dress hugs a woman's figure in all the right places, Leyte 4th District Representative Lucy Torres-Gomez warmly embraces all that life gives her.

With every experience she has had as a wife, mother, and public figure, she has deepened her well of confidence and found the courage to accept new opportunities, proving that she is indeed every inch a Metro woman—accomplished and fulfilled, yet constantly searching for fresh territory to conquer.

As Metro celebrates 30 years in the industry, we look back at all the ways Lucy has been the quintessential Metro cover girl and how she and the magazine have evolved to become icons in the eyes of their discerning audiences.

"My biggest achievement is also my biggest challenge. I come from a very sheltered home. Everything was set up for me... I was very dependent," Lucy begins.

"But having said that, many of the things I ended up doing were some of the things that I said I would never do: join politics, do show business. Wherever life takes us, we really have to breathe into it.. Just breathe into it, however much of it you can take on at the moment, and trust that today is just part of the journey," she adds.

Though easier said than done, it's the principle she has always turned to in a number of situations. She calls it "doing things afraid" or in other words, developing an appetite for the unknown. Fear of the uncertain will always be there, she explains, but it's the willpower to push that aside and soldier on that opens up doors to many unforgettable moments.

"I look back now, and say that if I said 'no' to many things that I've already said ‘yes’ to and turned out to be fulfilling, I would have missed out on so much. Life is all about discovery," Lucy smiles. 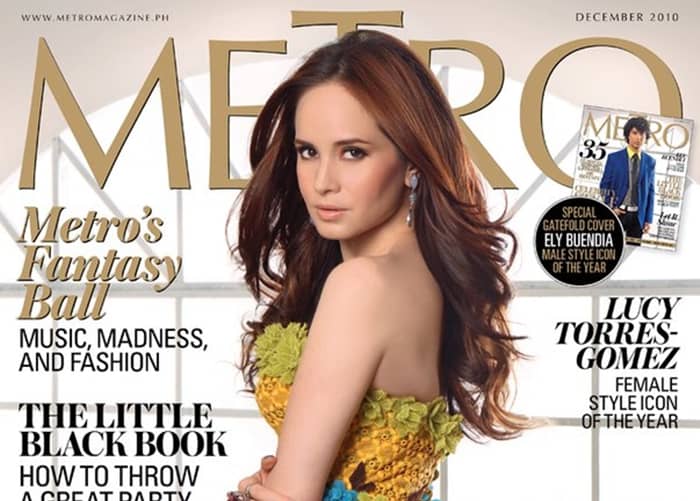 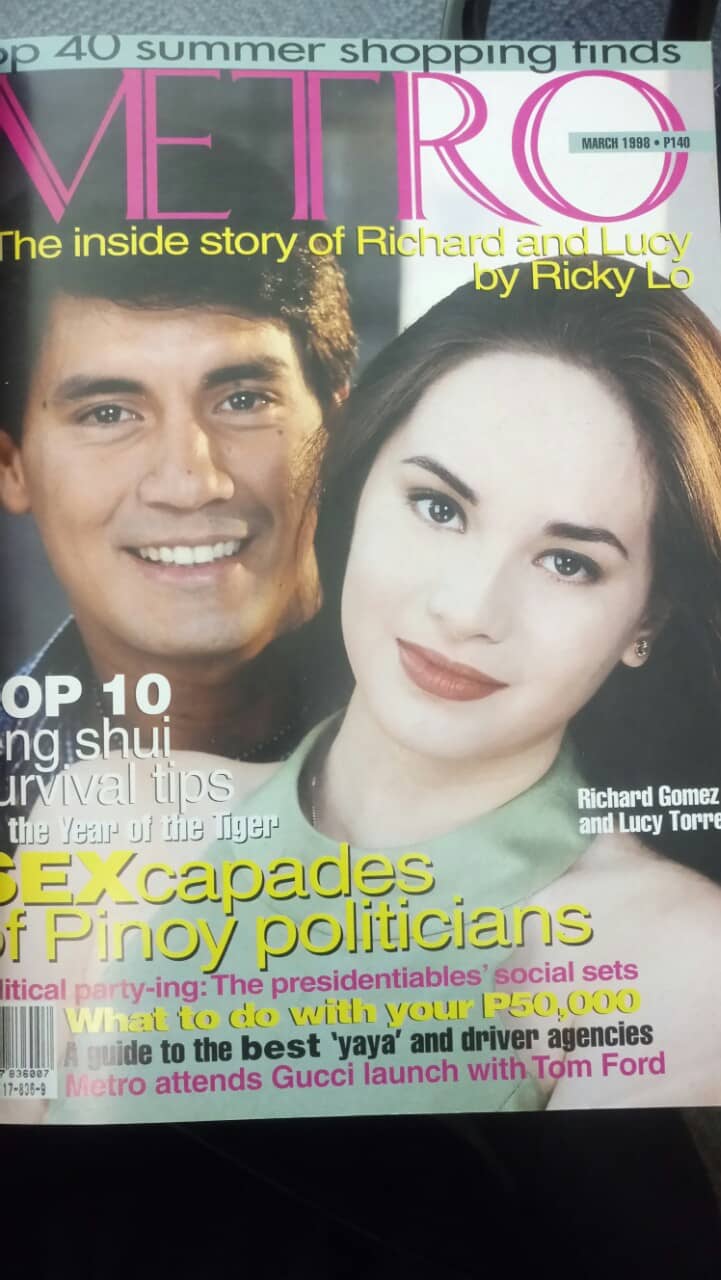 Couple Lucy Torres and Richard Gomez graced the cover of Metro together in March 1998. Just a few months after Lucy made her Metro cover debut with Richard Gomez, she was featured again in the September 1998 issue, this time a solo feature that zooms in on her being a "loving wife." 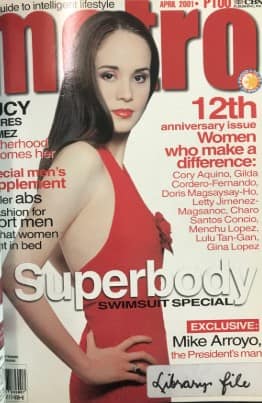 Lucy appeared on the cover of Metro in April 2001. In her red swimwear, the then new mom radiates with the glow of motherhood, having just welcomed her and Richard's daughter Juliana into the world less than a year when this shoot took place. Metro recognizes Lucy as a sophisticated lady whose fashion style is head-turning in its simplicity, Lucy loves going to shoots because it's where she can experiment with her style. For the August 2007 issue of Metro, Lucy was photographed with an edgy look that showed the versatility of her beauty. 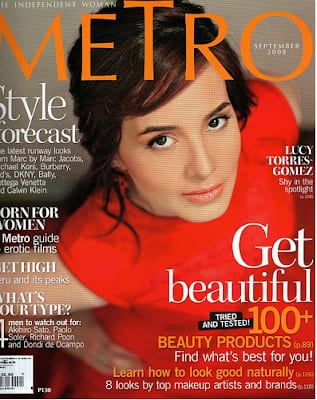 Lucy has one of the most beautiful faces in local showbiz, and this striking shot for the September 2008 issue of Metro proves just that. 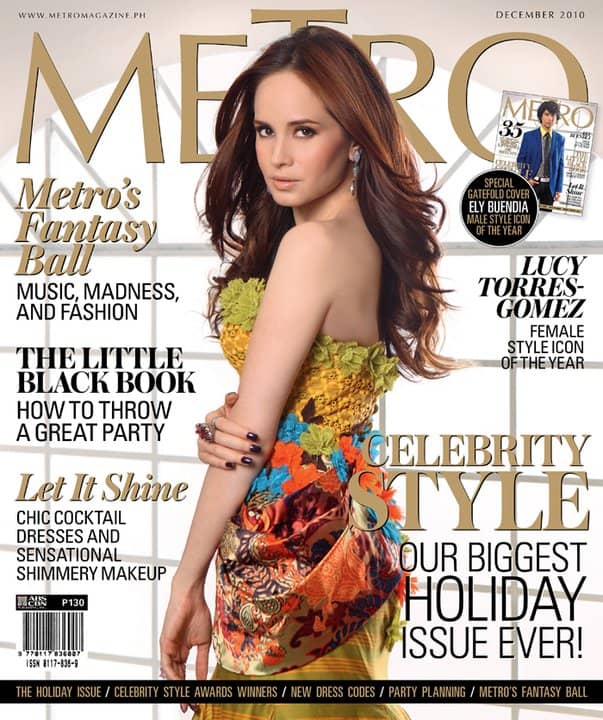 Lucy was declared the Female Style Icon of the Year by Metro, with a stunning cover feature for its December 2010 issue. Digging deeper into how much of a fashion and beauty icon Lucy has been, Metro featured her on its cover again, this time for its October 2011 issue with the theme "Ageless Style." On Lucy: Red blazer by Yong Davalos, red dress by John Herrera, and earrings by Jul B. Dizon | Photo by Dookie Ducay

With this attitude, she successfully transitioned from celebrity life to serving in public office, gracefully handled married life and first-time motherhood, and as a certified Metro woman, openly experimented with beauty and fashion trends—an experience that has pulled her out of her comfort zone more than once!

"I try to keep an open mind when there are shoots. I try not to be demanding in a sense that [I don't want to experiment with other looks], that this is only what I'm going to wear... But it's nice to work with creative minds! Sometimes, you get stuck with a certain [look] that it's actually refreshing to go into a shoot with no expectations and then bring home something new," shares Lucy as she's perched on her makeup chair and getting prepped to change into her bold, sharp, and chic red ensemble for the day's shoot.

The color looks magnificent on her porcelain skin and, interestingly, is an ode to one of her very first shoots with Metro. She admits to never wanting to sport red clothes until she wore a red dress for the editorial, and despite being unsure of how it looked on her, the finished product was nothing but regal, stunning in every way.

I try to keep an open mind when there are shoots... It's nice to work with creative minds! Sometimes, you get stuck with a certain [look] that it's actually refreshing to go into a shoot with no expectations and then bring home something new

On Lucy: Blazer, vest and trousers by Vin Orias and earrings and necklace by Jul B. Dizon | Photo by Dookie Ducay

It's this unique brand of intuition that allows the Metro team to connect with subjects and gain their trust, encouraging them to dive deep into their psyches to find untapped facets of themselves. After all, like beauty and fashion, Metro cover girls are forever shaped and reshaped over time, filled to the brim with their many experiences waiting to be translated as visual, glossy stories on a cover.

In fact, Lucy credits her Metro photo shoots for some of her best experiences on set and for developing her own tastes in fashion. After doing eight covers, she has realized that this magazine is able to coax her out of familiar ground and surprise her with what she can accomplish style-wise. "P’wede pala. Bagay pala," she jokes.

Overall, the necessity to reinvent is but one of the many lessons on style that Metro has taught Lucy; she has also learned the value of curation, choosing quality over quantity, longevity, and training one's eye to spot great pieces from a mile away.

More so, she considers her Metro cover portfolio as a stylish way to keep her fondest memories. Think photo albums of the past that once filled shelf after shelf in many a childhood home, but much more fashion-forward. That's because Metro has always been there to capture Lucy's life's biggest milestones—and over the span of two decades, no less!

"When you see [the covers] all together, there's so much history. I was looking at the first covers, and a really special one I think [was when Richard and I] were newly married or engaged, because I still remember that dress! I think I still even have outtakes of that shoot," Lucy reminisces.

And now, for Metro's 30th anniversary issue, Lucy is no longer but a blushing bride, but a sure-footed public servant with great missions to accomplish—a far cry from who she used to be as a television personality.

You can't give from an empty cup. You constantly fill your days [as much as] you can with what empowers you and what makes you happy

This time, the magazine highlights her shift in responsibilities and passions. As the ultra-feminine dresses she once dressed in are replaced by power suits and more commanding ensembles, the path her life took is reflected perfectly.

"As the years go by, we change. Our style changes," explains Lucy.

And it's a change that reflects in perspective, too; when Lucy was once preoccupied with celebrity life and moved by the glamour of the industry, she now concentrates on how she can better the lives of Filipinos, looking to them—and the women she serves, in particular—for inspiration.

"I like the enduring resilience of the very poor housewife I see in the district who is able to make ends meet by the sheer work of her hands and the love for her family, and is able to do that with a smile," she shares as insight.

But at the end of the day, when the heels come off and the lipstick is wiped away, at the center of Lucy's life are still her family and self-care.

The Metro woman might be an achiever, but the rest is still needed, Lucy reminds.

I like the enduring resilience of the very poor housewife I see in the district who is able to make ends meet by the sheer work of her hands and the love for her family, and is able to do that with a smile

"So many times, women have a tendency to want to be a hero by glorifying being busy. I feel that very important is 'editing' and not being a yes-girl. Because that's a source of stress, when you spread yourself out too thinly. Do things that make you feel alive and engage in little activities... Everything in balance."

This mantra might very well be Lucy's secret to looking as ageless as ever despite a schedule as packed as hers; guilt-free vacations, minimal makeup, a skincare routine, a tidy home, and a tight-knit family are the things that matter most to her.

Asked to describe who the Metro woman is, Lucy might as well be talking about herself:

She says, "When I think of a Metro girl, I think of somebody who is empowered. Somebody who acknowledges that time is her greatest asset and as such, she's able to edit her life or her day. By saying that, you're not a pushover, you're not a yes-girl, you're not a people-pleaser. You edit your life not because you think so greatly of yourself, but because you value your time and how invested you are you are in what you choose to have in your life."

But that's exactly who Lucy is as a Metro girl, in style, in influence, and in heart.

So many times, women have a tendency to want to be a hero by glorifying being busy. I feel that very important is 'editing' and not being a yes-girl