Metro At 30: Maymay Entrata Continues To Live The Dream

With all that this Big Winner has accomplished in her blossoming career, she deserves to give herself a pat on the back for being successful in her career yet still managing to keep her humble self intact

This is a story of a girl who believed in the power of positivity, on making your wildest dreams a reality through hard work and perseverance, of wishing for the stars but always bracing for the worst outcome. This is the story of Maymay Entrata—Pinoy Big Brother season 7 big winner, reality star, international runway model, and Metro cover girl.

What does it mean to be a cover girl? For other publications, a cover girl may be a dime a dozen, but for Metro, it is a distinct stamp that you have it, that you have made it, that you are it. That it, so described, is a mix of personal achievement, gravitas, and relevance, added with a dash of mystery and je ne sais quoi, that give each cover girl that special Metro touch. Before this phenomenal loveteam made their Metro magazine debut, the two first appeared on the digital cover of Metro.Style in March 2018, a feature that declared them the next big thing. True enough, the months after that shoot had been very busy for them with TV shows, movies, concerts, and tours.

Maymay Entrata and her partner Edward Barber were featured on the cover of Metro magazine for its annual Philippine Fashion issue in June 2018. For the shoot, the phenomenal love team got to explore the vibrant streets of Escolta in psychedelic 70s-style fashion.

Maymay Entrata's solo cover feature for Metro magazine was released in October 2018. At the time, she was busy with her solo "The Dream Tour: Maymay in Concert" event as well. 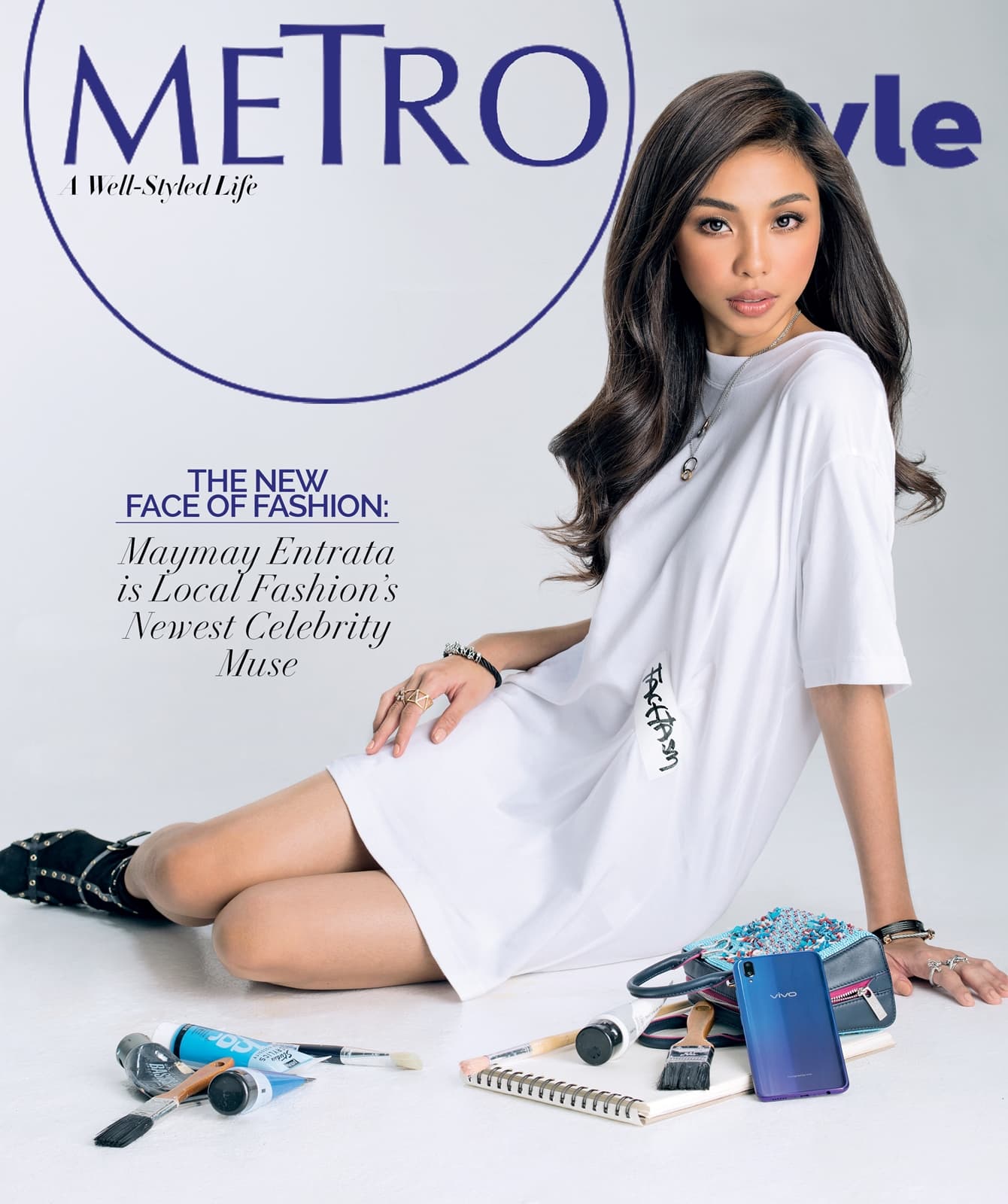 Maymay Entrata's solo Metro cover feature was supplemented with another cover feature in the magazine's digital platform, Metro.Style. In the feature, she was named local fashion's newest celebrity muse. EXCLUSIVE: Maymay Entrata And Edward Barber On The Cover Of Metro.Style: Why MayWard Is The Next Big Thing

Star on the rise

Real, witty, and laidback—the real charm of Maymay is in the authenticity that she has shown inside the PBB house. As she emerged the winner of Season 7, it was clear to everyone that her endearing characteristics reached even beyond the reality show. In her interactions with fans, from her social media posts, she exudes a feeling of lightness and fun, never taking herself too seriously, yet still carefully toeing the line of what is expected of her.

This was the basis of many of her first acting roles—as Apple Toralba in La Luna Sangre, as Sunshine Camantigue in Loving in Tandem, Serrah Monseratt in Da One That Ghost Away, Princess Maulan in Fantastica, and Mary Dale Fabregas in Hello, Love, Goodbye. She expertly plays the pure-hearted young lass who places her trust that everything will be alright. Hopeful to a fault, her beliefs in firmly in place—these roles actually give insight into the psyche of Maymay. She shines in these roles because she is reflecting a little part of herself in them.

Yet acting doesn’t necessarily come easiest for her.

It seems that the work has seemed to pay off, if you were to judge with the complexity of her recent role in Maalaala Mo Kaya, where she portrayed a similarly hopeful young woman whose hopes were dashed because of a rare cancer that afflicted the young. Here, her performance was subtle yet meaningful, and being paired with her onscreen partner (and best friend), Edward, certainly helped her cause.

Often, she cites Edward as a source of her strength and likewise a source of endless fun. We saw this when we photographed Maymay with Edward in the newly revived Escolta, the two dancing on the street with a la-70s-style amidst the throng of curious onlookers, or posing along the stores of Ongpin clad in their colorful frocks.

But more than Edward, we believe that the strength has always been within. It is innate, and it comes from her clear sense of who she is. To be honest, being in the spotlight does have its pitfalls—and at some point, stars often “lose themselves,” blinded by the lifestyle, the glitz and glamour and the love of the fans. This is not the case for Maymay.

For her, keeping her values intact is paramount.

In her journey, she admitted that it wasn’t always the case. There was a time when she found herself on the path to becoming someone she wasn’t set out to be. Her family, thankfully, was responsible for keeping her grounded.

She credits Gary Valenciano as a source of inspiration in her journey, appreciating his positivity despite the challenges.

Yet her biggest source of inspiration remains the most important woman in her life—her mother, Lorna. Her mother never fails to remind her of what truly matters in life: Finding happiness and remaining true to herself.

These dreams, she made them come true one after the other, but despite all that, Maymay strives to live a simple yet meaningful live.

Maymay Entrata Looks Awesome In This Dress. Here's How You Can Too!

#MetroLovesMayWard: Maymay Entrata And Edward Barber Take Us On A Psychedelic Stroll Along The Streets Of Escolta

One of those dreams, she shared with us, was finding herself solo on the cover of Metro magazine. That cover was very special, because it pushed her in a direction that seemed scary at first, but turned out to be pivotal in shaping who she is. The concept of the shoot focused on wardrobe essentials, and Maymay had a layout where she was to wear an oversized t-shirt that gave the impression that she was only wearing that.

Yet instead of refusing to do the shoot, she made her concerns known by the photographer Xander Angeles, and the Metro team, and soon, she found her rhythm.

Working with Metro gave her an idea of what it was like to explore a different side of herself, “Dati, sobrang conservative ako. Siguro nababaguhan pa ako, lalo na ‘yung first Metro ko lagi akong—‘okay lang kaya ‘to?’ Ngayon, unti-unti kong natututunan na ma-appreciate ‘yung ibang side ko—ibang anggulo ko,” she says, also realizing that one can be tastefully sexy and avant-garde, especially in the name of fashion.

For Maymay, a Metro girl is someone who knows herself well enough to be able to transform into different characters yet remains true to who she is. And as we celebrate the 30th anniversary of Metro, she gives a sweet message for the whole team that supported her from the start: “Sobrang nagpapasalamat ako dahil simula nu’ng lumabas ako sa Bahay ni Kuya, naging parte agad ako ng family ninyo. Sobrang pinag-pray ko na sana mas ma-share ninyo pa sa buong mundo ‘yung fashion na meron tayo sa Pilipinas,” she says.

Maymay Entrata Will Not Be An Asia's Next Top Model Contender—At Least, Not Yet!

EXCLUSIVE: These Are The Best Christmas Memories Of Maymay Entrata And Edward Barber

As a young woman, she is often conscious of the fact that her dreams often carry multiple challenges, and more often than not, the bigger it is, the more uncomfortable you need to be. Yet, she never passes up on opportunities to do better, even if there are times when it might scare her.

With all the amazing blessings she received this year, she also thanked herself for never giving up on what seemed to be impossible for her before, and looks forward to a brighter and happier future ahead.