Metro At 30: Pia Wurtzbach, From Beauty Queen To A Multidimensional Woman

Despite having turned over her title to her successor in 2016, her star status has only increased, rather than diminished

Freedom. Miss Universe titleholder and Metro cover girl Pia Wurtzbach savors it like it's the sweetest, most delectable dessert she's ever had.

She takes a deep breath at the thought of how much she has changed since the publication first had her on its cover in 2015, exhaling with a smile and a nod that suggest how much she's pleased with the direction she has taken. But even with the thousand and one miles she has traveled since the starting line, her journey is quite far from over. As a quintessential Metro woman, Pia knows that all this is a lifelong journey with no discernible end; as for what's in store for her next, she's nothing but excited for it.

After all, with three Metro magazine covers (and counting!) under her belt, Pia is more than equipped to handle what the world—the universe, rather—has yet to reveal to her.

With a steady gaze and an aura whose brightness rivals that of the stars themselves, this Metro cover girl says, bring it on.

When I think Metro cover girl, I think of the Filipina now—someone who knows what she wants and how to get it, and isn't afraid to be herself or too apologetic to be herself 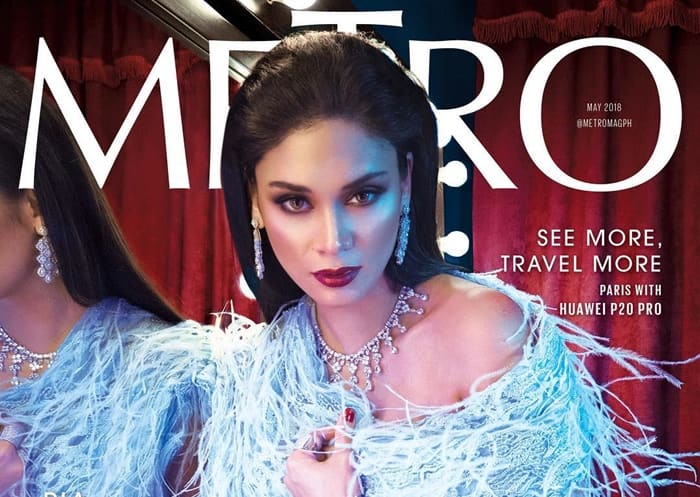 Pia Wurtzbach was featured on the cover of Metro magazine's July 2017 issue. Pia's showbiz career that year blossomed with several projects that included a "Maalaala Mo Kaya" episode, a stint on "Asia's Next Top Model Cycle 5," and "Gandarrapido: The Revenger Squad" (her movie with Vice Ganda and Daniel Padilla, which earned more than P500 million). 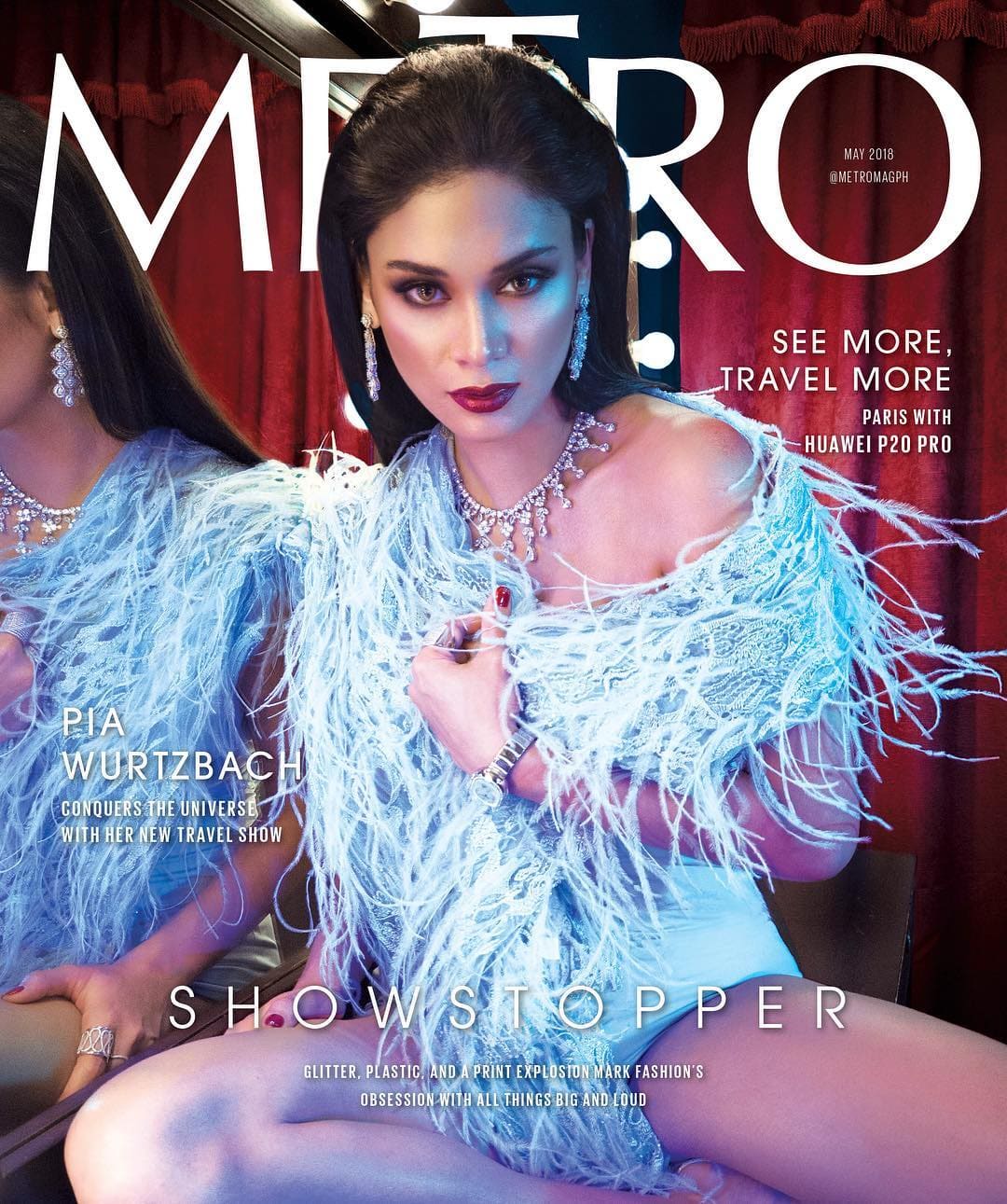 The beauty queen returned on the cover of Metro in May 2018, as she was about to embark on an adventure-filled journey as the host of the Metro Channel show, "Pia's Postcards."

EXCLUSIVE: Pia Wurtzbach Collaborates With Teviant For A Lipstick Collection

"I feel like I grow every year, especially when I think of the first Metro cover. I think that I know how to look my best, where I look best, but every year, there's still so much to learn," Pia shares as she's asked to reflect on what her time with Metro has been like.

There's too much to talk about and fit into a single conversation, she laughs, but if she were to choose the ultimate highlight of her Metro history, it would be how the magazine sent her off on a path to self-discovery and self-acceptance. There's not a doubt in Pia's mind that Metro was essential in her metamorphosis from beauty queen aspirant to a woman sure of her place in the grander scheme of things, one who knows that success is defined not only by crowns and the popular vote, but by personal development and pride in oneself, too.

In all of Pia's Metro shoots, behind figuring out the most flattering poses, how to elongate her figure, or how to talk with her eyes were takeaways on confidence. She also learned to trust her own judgement of herself despite others' efforts to chip away at it—values, she says, that all proved to be essential on and off camera.

"When you're young, you care about everything—which is good but you worry about everything, too—and you take everything to heart without a filter. A few years after winning Miss Universe, I've learned how to focus on the more important things and forget about those that I can't control. I can't please everyone; not everyone is going to like me and I'm not going to be everyone's Miss Universe. But I'm still growing, still moving forward, and that's the most important thing," she shares.

Consider it a mission accomplished by Metro, a magazine that aims to put the country's most beloved public figures in a light that allows their followers to gain a deeper understanding of who their idols are, inside and out.

"I'm proud that I'm finally starting to see myself... I'm starting to grow up, finally. There's still so much to learn about yourself, and what you want. I know what I want now. I have more direction," she continues, revealing a vulnerability that many of her almost 10 million social media followers might not have known existed.

Just as there's more to appreciate than its glossy pages filled with images of fashion and beauty, the Metro women are likewise multi-dimensional and possess a depth of emotions and experiences worth uncovering. There is more than meets the eye in both instances.

[Focusing on only the important things] is so liberating! Do you know how good that feels? It feels like freedom! You feel like you can enjoy more, you can live, you can be yourself, you can laugh harder, you can cry harder, you can feel more, and it's a great way to mature. It's really easier said than done, but some women will one day know what I mean

But this is Pia's story today; Metro has been there since its very first chapter.

Even before her historic win against her Colombian counterpart on the 2015 Miss Universe competition stage, the magazine had already spotted her potential from a mile away. Weeks before the pageant, Pia was tapped to pose for Metro's cover for the very first time.

"As soon as I won in January, with the new issue that came out, I was so happy that Metro came out with a cover shoot of mine even before. I would look at Metro covers before and wonder when it was going to my turn to try those looks, to be on the cover of Metro. [I guess it would be] all in perfect time," Pia recalls.

And as Pia's influence grew, so did her appetite for experimenting with wardrobe and beauty looks.

"I love exploring. I don't like staying with one look for too long. That's why I like working with different hairstylists, makeup artists, photographers, and stylists because I want to see what I look like in their interpretation of me—not the other way around," she explains.

Slowly but surely, Pia came into her own, she departed from her pageant image and re-introduced herself to her audience as a rising style icon with Metro right be her side. To date, we've seen Pia in every look imaginable; from her sexy two-piece modern Filipiniana at this year's ABS-CBN Ball and her hundreds of curated travel OOTDs, to her sultry glam looks to bare-faced selfies, Pia has gone leaps and bounds from the cookie-cutter mold of a pageant winner.

This bold transformation all boils down to a realization she made in recent months: when you're true to yourself, when you listen to that internal compass that tells you what's right for you, when you have enough faith in yourself to test out unknown waters, beauty and charm follow with ease.

In her words, " It's unnecessary to put up a front. If you want to last longer in this industry, be yourself. Especially in pageants, you feel like you have to fit into this certain mold. If not, you're never going to win. But isn't it the ones that who win are the ones who are different and are themselves, or at least get noticed?"

And noticed Pia was, indeed.

Despite having turned over her title to her successor in 2016, her star status has only increased, rather than diminished. She's now an actress, host of Metro Channel's travel show Pia's Postcards, an endorser to many of the country's leading brands, an active HIV/AIDS advocate, and an overall example to women far and wide.

She also recently released a lipstick collection in collaboration with Albert Kurniawan's local cosmetics brand Teviant. Next, she is set to release a fictional book to pass on all the lessons she's learned post pageant life.

"I feel very blessed to be getting the opportunities that I've been given after I passed on my crown... I'm glad that I'm able to explore other things that I can do back home," Pia shares.

I've learned that it's so much easier to be yourself. It's exhausting to put up a facade... Just be honest, genuine, and authentic—people can tell

But even role models like Pia need inspiration themselves, too.

In the industry, she looks to none other than Anne Curtis, a celebrity with staying power like no other who Pia says has ticked off all the items in her professional bucket list. ("How does she do it? I never got to say this to her, but saludo ako sa kanya. I really admire her! She really is life goals!" Pia laughs).

Before Pia ends this conversation, however, she touches on an important note that she hopes everyone, man or woman, young or old, celebrity or non-celebrity, will internalize.

"A few years ago, it was considered nakakahiya to ask for help. I feel like today there are still some women who still can't ask for help because we live in a time right now when everybody is doing something or is busy. You would put a lot pressure on yourself to keep up with what society wants, and you feel bad for asking for a break or feel guilty. Hindi ito parang ang mga mayayaman lang ang nakaka-afford ng self-care! That's not true! Kailangan talaga, and don't feel bad about it," she emphasizes.

She uses herself as an example and how she consciously detaches herself from work for a few weeks every year. Each time, she reminds herself not to fear being thought of as "lazy" or irresponsible, because in her heart, she knows the importance of hitting the pause button; the Metro woman would never take breaks for the sake of doing so, and when they do, it's simply because they're recharging for the next round successes to be made. (And when Pia does, she uses the time to exercise and—unashamedly—watch some of her favorite reality TV shows!).

She also warns against the related dangers of being a "yes person"—it's a surefire formula for burnout and losing one's purpose. Be careful, she advises, as the risk of doing things for others' gain rather than personal fulfillment is very, very real.

Remember Pia's mantra: always be true to yourself, and things will fall into place.

It's okay to not be okay. In this industry, I've learned that people are understanding and forgiving; when you're honest with yourself, they'll love and accept you more

Bodysuit and trousers by Neric Beltran

Overall, Pia's words are all wonderful lessons to live by, especially now that she has just turned 30.

She officially has the rest of her life's prime years to look forward to and although she's knows that she's accomplished a lot, there's another dream she wishes to chase next, though; it's more personal, rather than professional, in nature.

"I'm hoping that by the time I'm 40 or 45, I'll be more secure, have a family, be happier, and that I'll have a silent confidence in me. I just wish that I'll have it all figured out. From what I've learned from women who are that age, they seem happier, too! I can't wait to feel that happiness and gain that wisdom, that strength and guidance," Pia says.

For a Metro woman like Pia, these things matter of "if" but a matter of "when." With their drive and focus, dreams do always come true. And when the moment finally arrives, Metro will surely be there to capture it all, immortalizing it with yet another iconic cover for keeps.