From the Philippines’ Hidilyn Diaz to Japan’s Momiji Nishiya, there is no denying the power of women at the Olympics

The 2020 Tokyo Olympics have been in full swing since the opening ceremonies in July—with only a few days left in the games, all of us have been witness to some of the world’s most dedicated and outstanding athletes, from the United States’ Simone Biles to the Philippines’ very own Hidilyn Diaz.

Throughout the games, several athletes and Olympians have made history with their wins, making their home countries, loved ones, and themselves, proud. The Olympics this year also carries the distinction of being the first Olympics that is mostly balanced in terms of gender, with 49% of the athletes competing being women.

The Philippines in particular is celebrating the victory of Hidilyn Diaz, who just won the country’s first-ever gold medal in the Olympics, ending a 97-year wait for this kind of victory.

So far in the Tokyo Olympics 2020, two Filipina athletes (Hidilyn Diaz - Weightlifting - Women’s 55kg and Nesthy Petecio - Women’s featherweight) are making waves with their respective victories at the international sporting event. Despite gender-equality issues, the hashtag #AbanteBabae trended on Twitter as netizens and celebrities congratulated the Filipina athletes who made the country proud in the Olympics.

Here are the history-making women at the 2020 Tokyo Olympics: History-Making Women at the 2020 Tokyo Olympics 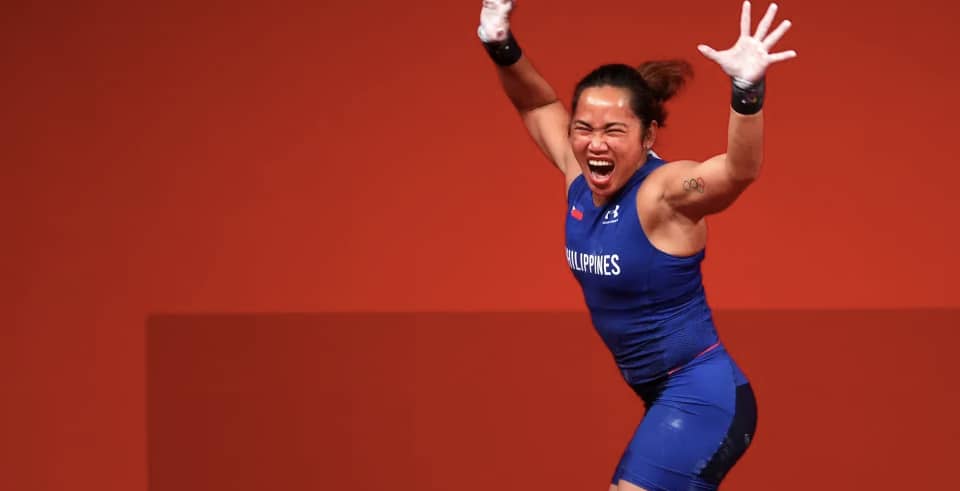 Hidilyn secured the Philippines’ first-ever gold medal in the history of the Olympics with her win at the 55kg weightlifting competition last July 26 at the Tokyo International Forum. Since beginning her athletic career in the 2007 Southeast Asian Games, Hidilyn has gone on to win a total of 14 medals across different competitions, from the Olympics to the Asian Games. 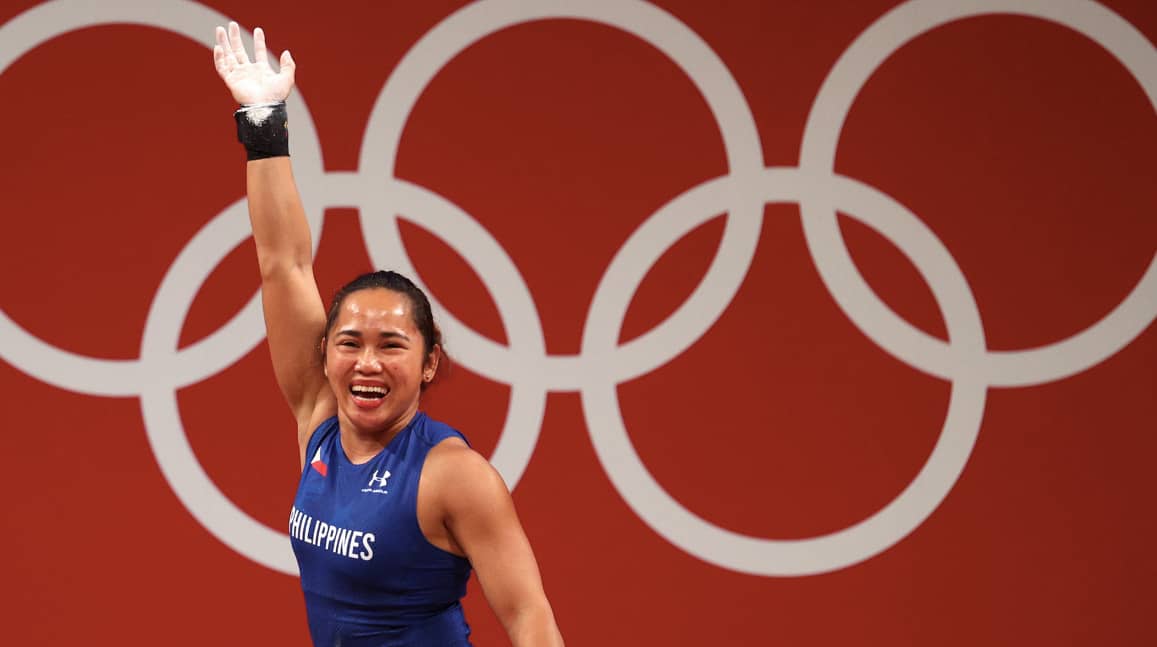 Hidilyn, who entered the Philippine Air Force in 2013, was promoted from Sergeant to Staff Sergeant following her success at the Olympics, and was even portrayed by Jane Oineza in episode of "Maalala Mo Kaya" back in 2016. She has been recognized and awarded multiple times since 2017, and was given financial and asset awards, as the Philippine Sports Commission guarantees a 10 million-peso incentive for every Olympic gold. 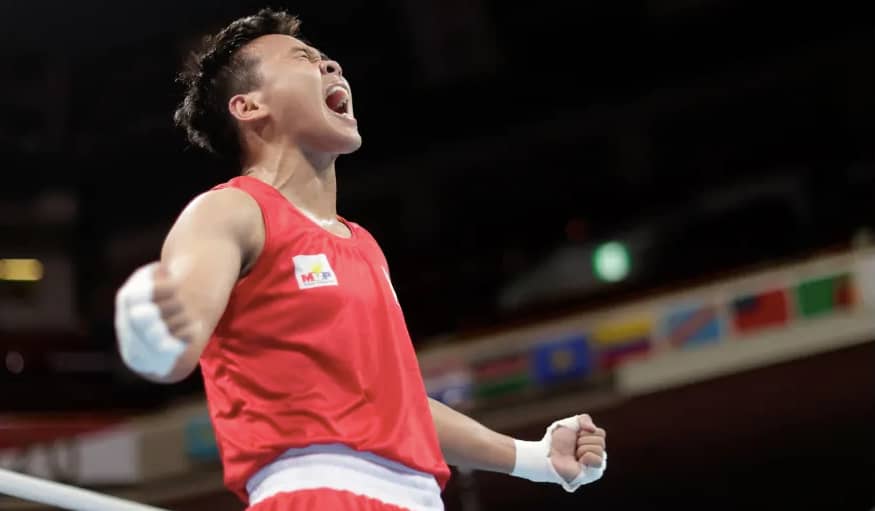 Nesthy Petecio, the first Filipina to win an Olympic medal for boxing

Nesthy, who is now the fourth Filipino to take home the silver medal, first took up boxing when she was only 7 years old, as a form of self-defense. Today, she is a silver medalist at the 2020 Tokyo Olympics, succeeding Onyok Velasco’s 1996 win, and is poised to continue her feats at the upcoming 2024 Paris Olympics. But what’s truly impressive about Nesthy is the fact that her turn at the Olympics is only her first—and she already won the silver. Nesthy Petecio, the first Filipina to win an Olympic medal for boxing

The amateur boxer, who is also an openly gay member of the national team, dedicated her win to the LGBTQ community. “I am proud to be part of the LGBTQ community,” Nesthy said after winning the silver medal at the women’s featherwight finals yesterday. “Para rin po sa LGBTQ community ang laban na ‘to,” she added. Since launching her career at the 2011 Southeast Asian Games in Jakarta, she has won a total of nine medals across various competitions. Lee Kiefer, the first Asian-American to win a gold medal in fencing

Filipino-American athlete Lee Kiefer is not to be trifled with: She became the first American to win an Olympic gold medal in individual foil fencing—and the first Asian-American to win a fencing gold in general—all while attending med school. To her, fencing is a “family sport,” from her father (who once captained the fencing team at Duke University), her siblings, to her husband Gerek Meinhardt, a three-time Olympic fencer, reports NBC News. 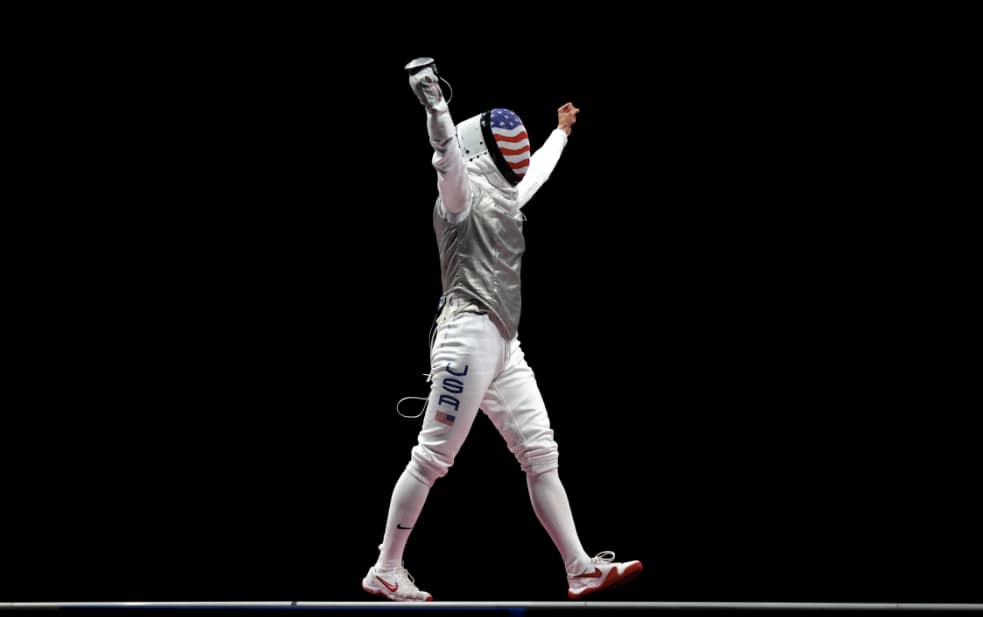 Lee Kiefer, the first Asian-American to win a gold medal in fencing

The daughter of a Filipino mother and an American father, Lee began her athletic career at the 2010 Pan American Championship in San José, Costa Rica, where she placed first. Since then, she has competed at the World Cup, the NCAA Championship, the Grand Prix, the World Championship, and, of course, her first outing at the 2020 Tokyo Olympics, where she ultimately took home the silver. 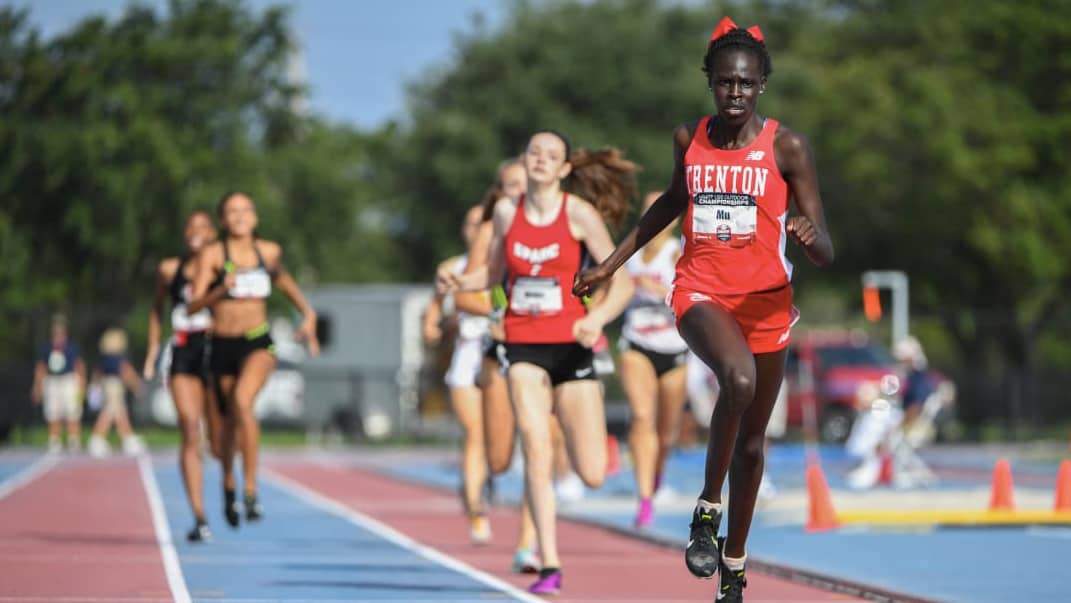 Athing Mu, the first American woman to win the 800m race in 53 years

Since her first race when she was 16, Athing Mu has continued to break record after record, until finally winning the gold at the women’s 800 meters at the Tokyo Olympics. Her record-breaking run of 1 minute and 55.21 seconds saw her leading almost from start to finish, and reaching the finish line has never been sweeter. Athing Mu, the first American woman to win the 800m race in 53 years

Athing, who has South Sudanese roots, is proud of her heritage, which became one of her major motivations in winning. Her brother Deng told the "New York Times" in 2020, “When you are from an immigrant family that comes in with its back against the wall, you know what the bottom is. It gives us a focus on pursuing things that would help us improve our lives.” Reportedly, Athing is poised to become the highest-paid female track athlete in the United States following a deal that transitions her into a full-blown professional athlete. It’s one thing to win one gold medal—that in itself is already a feat that not many can say they’ve accomplished. But for one swimmer, Katie Ledecky of Team USA, her gold medal from this year’s Olympics is now her sixth overall. She was 15 when she first started her career as an athlete, winning the gold in the women’s 800m freestyle. At the 2016 Rio Olympics, she was the most decorated female athlete with four golds, one silver, and two world records. At the 2020 Tokyo Olympics, she won the gold in the 800m freestyle for the third consecutive time, and she hopes to get back in the water by the time the 2024 Paris Olympics roll around. Carissa Moore, the first woman to win a gold medal in surfing at the Olympics

Surfing—along with baseball/softball, karate, skateboarding, and sports climbing—is one of the five additional sports added by the International Olympic Committee to the programme for the 2020 Tokyo Olympics. It was professional surfer Carissa Moore’s first time at the Olympics, but she managed to snag the gold medal for the newly-added sport, making her the first-ever surfer to win at the Olympics. She began her career in 2010, when she qualified to compete at the World Surf League, then still known as the ASP World Tour. She was named Rookie of the Year. She continued to compete throughout 2013 and 2015, until she finished first place at the 2019 World Surf League Women’s Championship Tour, thereby qualifying her for the 2020 Summer Olympics. Flora Duffy, who won the first gold medal for Bermuda in the women’s triathlon

Bermuda, like the Philippines, celebrated their first-ever gold medal after Flora Duffy won the women’s triathlon this week. According to the Associated Press, she is only one of two athletes representing the island. “I was Bermuda’s first medal hope in many years,” Flora said. “I wanted to achieve this for myself and my country. I was overwhelmed.” Prior to the 2020 Tokyo Olympics, Flora has been competing as early as 2006, in the Junior category of the ITU Triathlon World Championships, winning silver. Since then, she’s competed at the Pan American Games, winning bronze in 2015; the Central American and Carribean Games, winning silver in 2010; the XTERRA Triathlon Championships, where she has brought home five gold medals and one bronze, and finally, the Olympics. 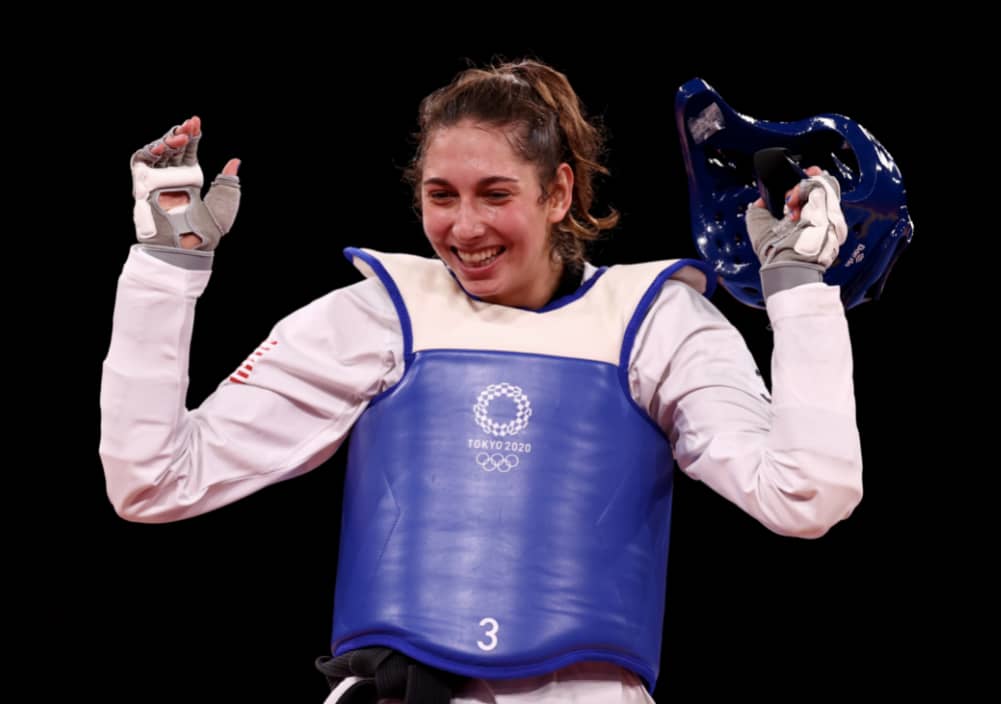 The 2020 Tokyo Olympics is Anastsija Zolotic’s first outing at only 18. Still, she already won a gold medal in taekwondo, making her the first American woman to do so. Before qualifying for the Olympics, Anastasija competed at the 2018 Summer Youth Olympics, in the Girls 49 kg weight class. At the taekwondo event early into the Games, Anastasija bested Tatiana Minini of Russia, winning 25-17. She first experienced the thrill of taekwondo when she was five, after her father placed her in a class. “Soon she was telling friends and family she would go to the Olympics someday,” writes the Associated Press. Like surfing, skateboarding is also one of the additional sports added to the 2020 Summer Olympics, and Momiji Nishiya, 13, became the first gold medalist in the sport, as well as Japan’s youngest Olympic medalist ever, and one of the youngest winners in the history of the games. “I welled up in tears because I was beyond happy,” she said after her win, according to CBS News. She bested Rayssa Leal of Brazil, who is also 13. More than half of the women in the final competition were in their teens, CBS News adds, with Funa Nakayama of Japan being the eldest at 16. 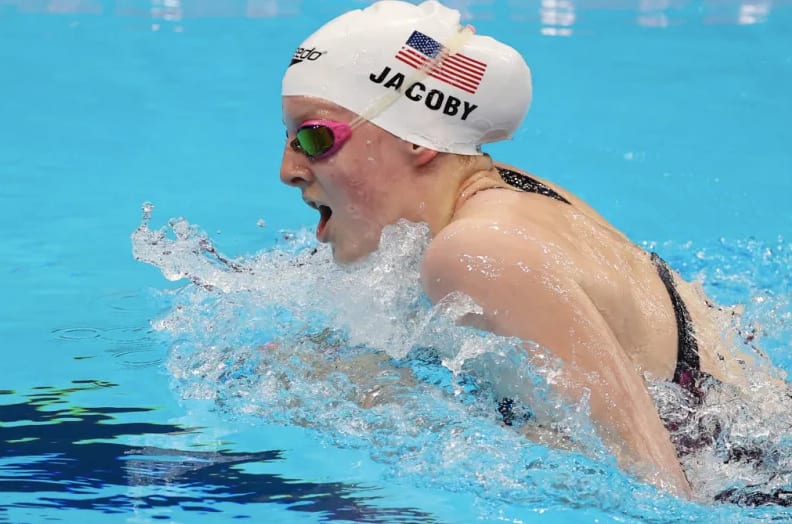 Lydia Jacoby, the first to win gold for the U.S. women’s swimming team

Like many of the other athletes in this list, 17-year-old Lyda Jacoby is also a first-timer at the Olympics, and brought home gold and silver medals for her participation in the 100m breastroke and 4x100m medley swimming events. Lydia first qualified for the U.S. Olympic Trials when she was only 14. Since then, she has gone on to win titles in various swim meets across the country, setting records in her age group. Outside of the pool, Lydia was part of a bluegrass band called the Snow River String Band, and when the COVID-19 pandemic forced everyone to remain at home, Lydia stayed active through skiing and running with ice cleats. 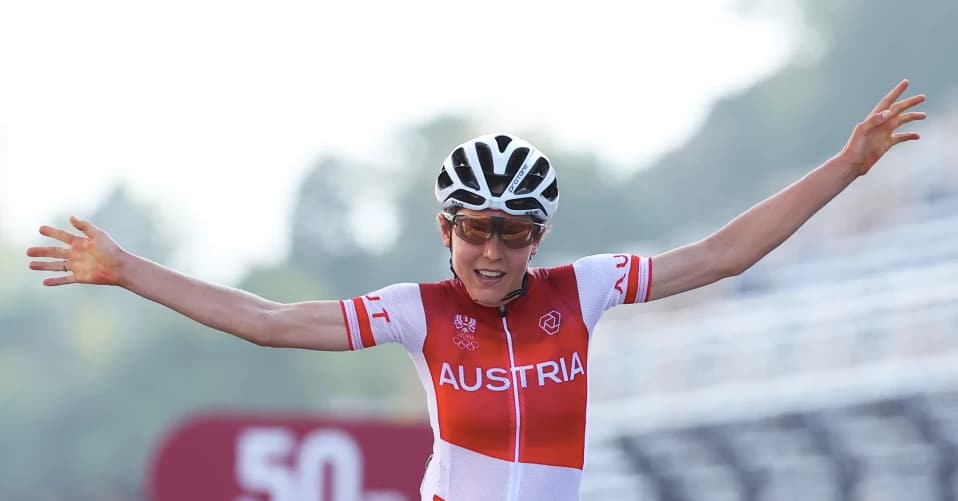 Anna Kiesenhofer of Austria is a cyclist, olympian, and mathematician. Currently a postdoctoral fellow in mathematics at the École Polytechnique Fédérale de Lausanne, Anna is a first-time competitor at the Olympic Games, and the first woman to win a gold medal in cycling for Austria. Prior to the Olympics, she participated in triathlons and duathlons regularly from 2011 to 2013, and concentrated on cycling after an injury limited her running. At the Olympics, she is Austria’s sole representative—and she’s coming home with the gold. 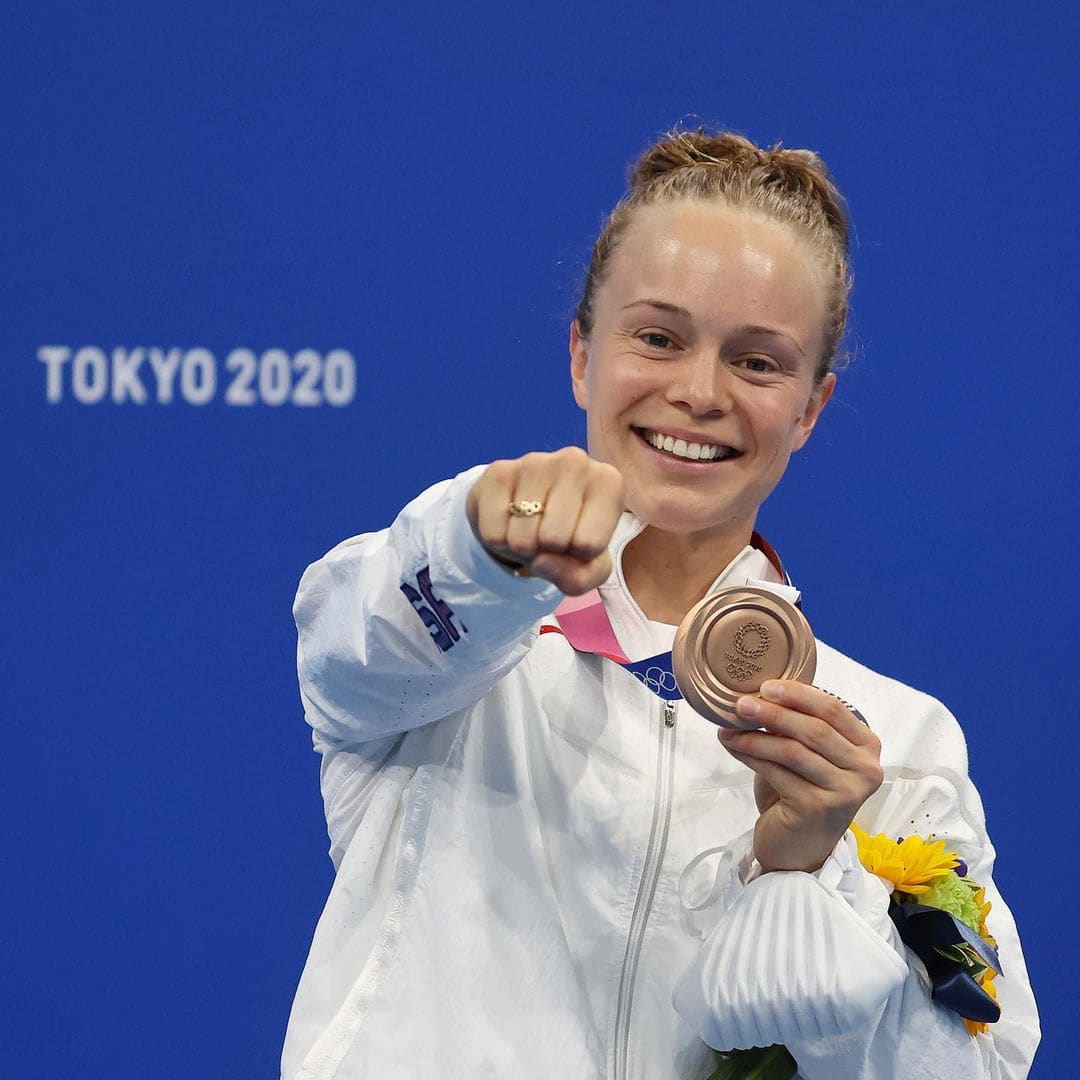 Krysta Palmer, the first American woman to earn a medal in an individual diving event in 21 years

29-year-old Krysta Palmer began her diving journey nine years ago, when she was 20. This year, she made her Olympic debut at the 2020 Tokyo Olympics, becoming the first American woman to win a medal in an individual diving event. Krysta also represented Team USA in the women’s 3-meter springboard, competing on a torn ACL and winning the bronze medal!

Our very own Margielyn Didal, who's proud to be part of the LGBTQ community, got the whole country cheering for her because of her positive disposition and sportsmanship. She even gained international fans because of her friendliness. She may have finished in 7th place, but she has already made history with her ranking in the debut Olympic Skateboarding Event. Her journey with the board started at age 12. In 2018, she made it to TIME Magazine’s list of 25 influential teens. In the same year, she earned gold in the Asian Games.

Photos from the Olympics

With words by Angelica Tordesillas

EXCLUSIVE: Donny Pangilinan And Belle Mariano Make The Coolest Couple Today In Their Hot New Series "He's Into Her"