In the days following George Floyd's death, hundreds of thousands of Americans have taken to the streets across the United States screaming for justice, change, and vindication—and show no signs of slowing down

Whether these words are written on cardboard, placards, faces, clothing, or shouted at the tops of the lungs, the message is loud and clear: the time for polite conversation about the injustices and cruelty faced by African-Americans has lapsed. The time of change has arrived, and it's long been coming. 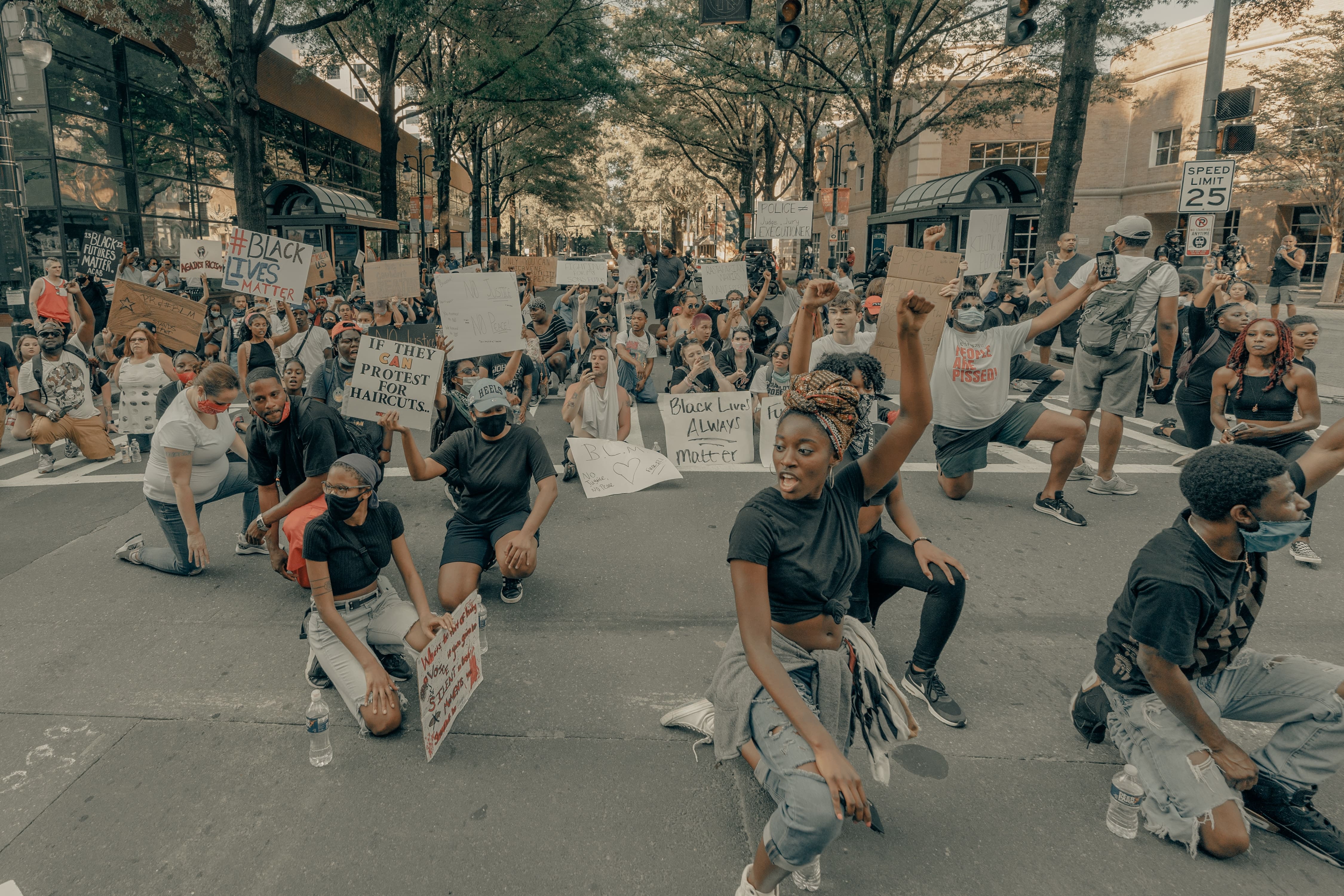 The issue of racial divide is not a new story in the United States. In fact, it's been around since the 17th century—about 400 years—beginning when the first African slaves stepped onto the British Colony of Virginia.

Countless revolutions and wars, big and small, have since taken place, all of which have had one end goal: to fight for the rights and liberties due to African-Americans, the same ones afforded to any and all people who call the Land of the Free their home no matter how dark or how light the skin one is born in.

And yet, despite centuries passing between then and now and the string of victories that history has given America's black minorities, here we all still are. Violence and killings fueled by racial discrimination and prejudice are very much inseparable from African-Americans' lives. It's painful to acknowledge that it always has been, for generation after generation after generation. But on this day, this month, and perhaps this year, this deeply rooted issue in American society could very well be reaching its climax, the part of the African-American narrative where the protagonist seizes control of their destiny, fighting with all its might to slay an ancient enemy and greet the dawn anew.

A man named George Floyd is behind the newfound hope for this radical change.

But big change rarely comes without a price, and in this case, yet another black life was sacrificed, unwillingly, in order to potentially save millions more.

Like many black men and women who have been unjustly killed in the past, the 46-year-old father was going about his business, living his ordinary life when a group of white policemen approached him. They would be the last human beings he would ever interact with before breathing his last.

Reports state that the policemen had responded to a call made by an employee at the grocery store George had just purchased cigarettes from who suspected that George might have used a counterfeit $20 bill.

The policemen—namely, Derek Chauvin, Thomas Lane, J.A Keung, and Tou Thao—then found and approached George who complied with their request to talk.

And just like that, George was face down on the asphalt with three of these four officers pinning him to the ground. More and more bystanders took notice of the situation as George's words became audible. A teenager, 17-year-old Darnella Frazier, instinctively whipped out her phone to document the incident that would spark protests nationwide within hours.

The footage was crystal clear:

Derek Chauvin had his left knee pressing on George's neck as he knelt on the ground.

Thomas Lane and J.A. Keung also use their weight on George's lower body to keep him constrained. Tou Thao stood with his back turned to George and looked on at passing traffic—all this, despite George committing no crime, being unarmed, and cooperating with the law.

Warning: The video below shows graphic footage of George Floyd's death as it happened.

Derek Chauvin left his knee digging into George's neck for a total of eight minutes and 46 seconds. Throughout this time, George can be heard pleading with the officers multiple times to stop, saying that he couldn't breathe over and over.

These were his last words:

I didn’t do nothing serious man

Please... man can’t breathe, my face just get up

I will I can’t move

I can’t my knee my nuts

Three minutes would pass after George saying he couldn't breathe for the very last time. Despite becoming unconscious and motionless, Derek Chauvin left his knee on George's neck for the entirety of these three minutes.

George would then be pronounced dead.

Investigations into the case argued that George had resisted arrest and that the officers' use of force was warranted. The filmed footage would debunk this.

What followed was an initial autopsy report claiming that George had an underlying heart condition that ultimately caused his death. It was only when George's family—and the greater public—met these results with outrage that a second, independent autopsy was performed and stated the cause of death as asphyxiation.

Kellie Chauvin, through her attorney, expressed condolences to Floyd's family and said she's filed for dissolution of her marriage#DerekChauvin pic.twitter.com/DFfPPR4gti

And then the protests began.

The wheels of history began to turn, creaking at first, but quickly gaining momentum.

The first wave of protestors took to the streets in Minneapolis, Minnesota, where George lived and died. They were also the angriest, and rightly so. As it turns out, Derek Chauvin has a reputation in the city for his unfair treatment of African-Americans and holds a record with 17 complaints of unjust use of force. He is but one of the hundreds, perhaps thousands, of policemen in America who hold similar records but have been left unpunished and undisciplined.

As the footage of George, news about the circumstances of his death, and photos and videos of the Minneapolis protests made their way to social media and across state borders, a fire was lit.

Yes there were literal fires that cropped up in several parts of the city as Minneapolis' African-American residents scrambled to express their rage and grief and the feeling of, not again. Another one of us. How many more of us?

A symbolic image of a protester in Minneapolis standing alone to face down the police riot squad. Open the picture for full scale. #Minneapolis #BlackLivesMatter #GeorgeFloyd pic.twitter.com/ifyKq9JpRv

But the fire we refer to here is the eternal flame within the hearts of Americans—black or white or brown or anything else—who have had enough.

In less than 48 hours, protestors from all over the United States gathered on streets to join Minneapolis in solidarity to make their message known: black lives matter.

Several cities in California, Oregon, New York, Illinois, Texas, and North Carolina are active hotspots of these protests. The US capital of Washington D.C. has also seen uninterrupted protests. Most of them have been peaceful and free of violence, however, there have been rioters ("rioters" must be differentiated from "protestors," as they have completely different reasons for being on the streets) that have taken advantage of the situation by looting stores and vandalizing city property, even hurting civilians and police alike.

George's brother, Terrence, made a public appeal to put peace first amidst the news of growing unrest and rising protest-related injuries and clashes.

Celebrities have been reported to have joined the protests.

Other celebs have chosen to help in other ways. Some have promoted a list of links where donations to relevant charities and organizations can be made, while others found even more unique ways to be of service (Steve Carell, Chrissy Teigen, and Seth Rogen have offered to pay for bail for arrested protestors, for instance).

The US has seen eight straight days of protests since May 25, and protestors show no signs of slowing down until they are acknowledged by the people responsible for changing the broken system—a.k.a. US President Donald Trump.

As Americans get angrier by the day, President Trump has threatened protestors with military force should they cross the line (the "line," of course, is undefined and subject to many interpretations). He has also temporarily taken shelter in a White House bunker as Washington protests intensified, and held not one but two questionable photo ops in front of two different churches holding a Bible in one hand.

He has also declared himself "President of Law and Order" in an attempt to back his decision to amplify the military's presence during these times.

However, what the protestors want is for President Trump to properly address the solution to this age-old problem, and lay out plans to fix a deeply wounded nation.

Clergy and peaceful protesters were beaten up by federal officers near and even on Episcopal Church property so @realDonaldTrump could walk over with Attorney General Barr and have a photo op with a Bible in his hand.
This is a disgusting abuse of power.https://t.co/ipzlTUxpkA

All of this is happening as the US continues to be a country with the most number of COVID-19 cases and a continuously rising death toll.

As the world watches on and people from all over offer their support, the question must be asked: where will this take black America? Is the pen of history writing the next chapter or is it repurposing a story that no one no longer wants to read?

The race to justice has always been difficult. Sometimes, it is so difficult that those who run it lose their breath.

But if Harriet Tubman and Malcom X, Rosa Parks and Martin Luther King Jr., James Meredith and Josephine St. Pierre Ruffin, and yes, George Floyd too, have taught us anything, it's that every race leads to a finish line—a victory.

Photos by Clay Banks via Unsplash

Fashion News: 5 Colorful Pieces And Collections To Cop This April!

Add To Cart: Beauty Finds For The New Month