This Good Samaritan Story Spreads Positivity Amidst The Coronavirus Outbreak

Because the worst of times can bring out the best in people, too

So, Metro Manila is under lockdown. Holy Week and summer break plans are off the table for pretty much everyone in NCR.

Also, the number of confirmed COVID-19 cases—as well as the number of deaths due to the disease—in the Philippines are on the rise. It's become worrisome to learn that doctors, nurses, and other front line medical staff are at their limit, some of whom are contracting the disease themselves or will soon fall prey to fatigue and burn due to the overwhelming influx of patients requiring testing and treatment.

Is It Safe To Go To Hospitals And Gyms Amidst COVID-19 Pandemic?

Handwashing, Drinking Water, And Being Old—The Science Behind Protecting Yourself From COVID-19

We're sure you've seen the photos, videos, and Insta-stories documenting the eerily empty shelves in supermarkets around the metro, too. Today, a woman who tested positive for the novel coronavirus in a San Juan hospital escaped, resulting in a two-hour police chase and negotiation.

In other words, things have gotten realer than real, and Filipinos are reeling.

No one really knows when the disease will ebb and when life will to return to normal (or at least, as normal as can be given the far-reaching economic, social, physical, and psychological effects of the pandemic), so yes—just like you, we're worried too and have to find reasons to smile and feel some sense of hopefulness amidst all of this.

This Is The Right Way To Sneeze And Cough, To Prevent The Spread of Bacteria

Which is exactly why we're sharing this lovely piece of citizen reporting we saw on Facebook user Lane Blackwater's Facebook page about a good Samaritan she overheard while lining up at a grocery's checkout counter.

The post, which has so far received over 50 thousand reactions, 28 thousand comments, and 203 thousand shares, features the little anecdote and a few photos to accompany the story. 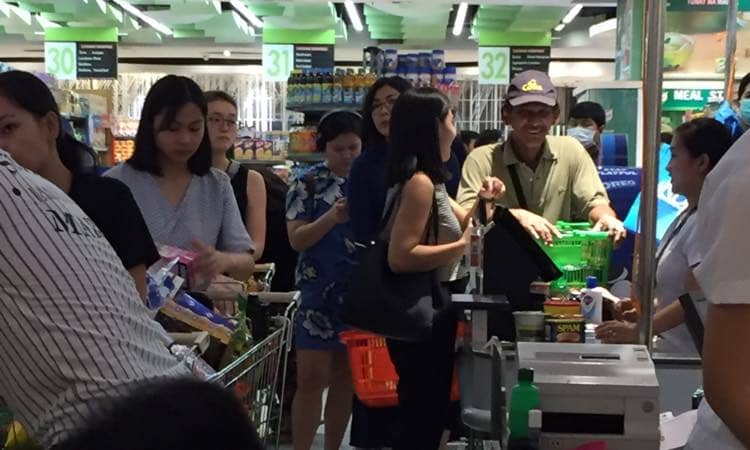 When And How To Get Tested For COVID-19

The rest of the story goes on to say how others in line with the goodhearted shopper overheard her conversation and soon followed suit, giving the the fortunate man some of the grocery items they had purchased for themselves. (Here's a related lesson on why you shouldn't engage in panic buying and hoard necessities: it deprives those most in need of basic items the chance to purchase them for their families and household, thus making them more vulnerable to the consequences of crisis times like this).

What To Do In Case Of COVID-19 Pandemic, According To An Infectious Disease Specialist

Avoid Fake News, Turn To This List Of Credible Sources For Updates On Coronavirus

A big kudos to the unnamed grocery Samaritan!

Displays of selflessness can be rare in times like this when we all go on self-preservation mode, but remember, everyone, how this kind stranger teaches us that good can prevail even when it's hardest to allow it to.

For your dose of inspiration, check out the full post below!