Our Miss Universe Philippines 2020 is such a fashion and beauty chameleon!

Miss Universe Philippines 2020 Rabiya Mateo is now in the US to get ready for the 69th Miss Universe competition that will be hold its coronation night on May 16. She left for her first-ever out-of-the-country trip, all geared up to take on the stage of this prestigious pageant, but not without leaving her fans generous servings of fierce, sexy, and stunning content.

For the latest photo shoot she shared, Miss Universe Philippines 2020 Rabiya Mateo channeled Priyanka Chopra's 2018 Met Gala look. The Indian actress wowed at the time with her deep burgundy velvet gown that featured an intricately beaded hood accent by Ralph Lauren; her outfit proved to be unique, a standout, and a perfect fit for that year's "Heavenly Bodies: Fashion and the Catholic Imagination" theme.

Rabiya Mateo, who hails from Iloilo, is actually Filipino-Indian, this is why photographer and creative director Seven Barretto thought of channeling Priyanka's iconic red carpet style for this IG-torial. "Sobrang inspired ako sa Met Gala look ni Priyanka Chopra when I saw it. She was my personal best-dressed for that day. And I think perfect si Rabiya to recreate it," Seven tells Metro.Style.

Fashion designers Mikee Andrei and Patrick Isorena brought that vision to life with the jaw-dropping ensemble they created for Rabiya. The powerful fashion look was amped up by Rabiya's dramatic beauty look, courtesy of makeup artist Carissa Cielo Medved and hairstylist Aries Manal. 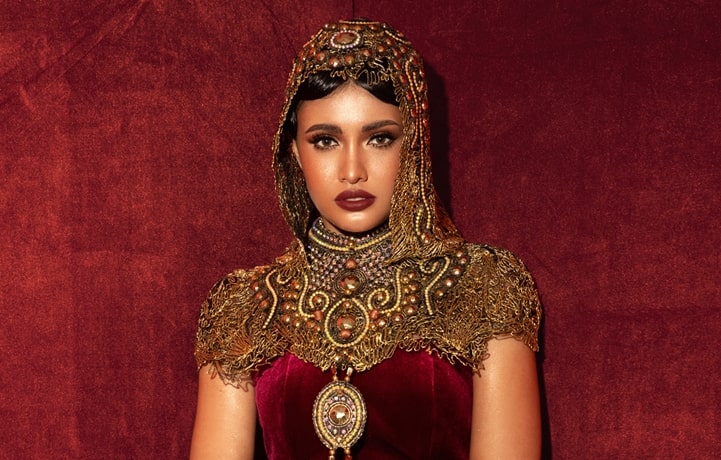 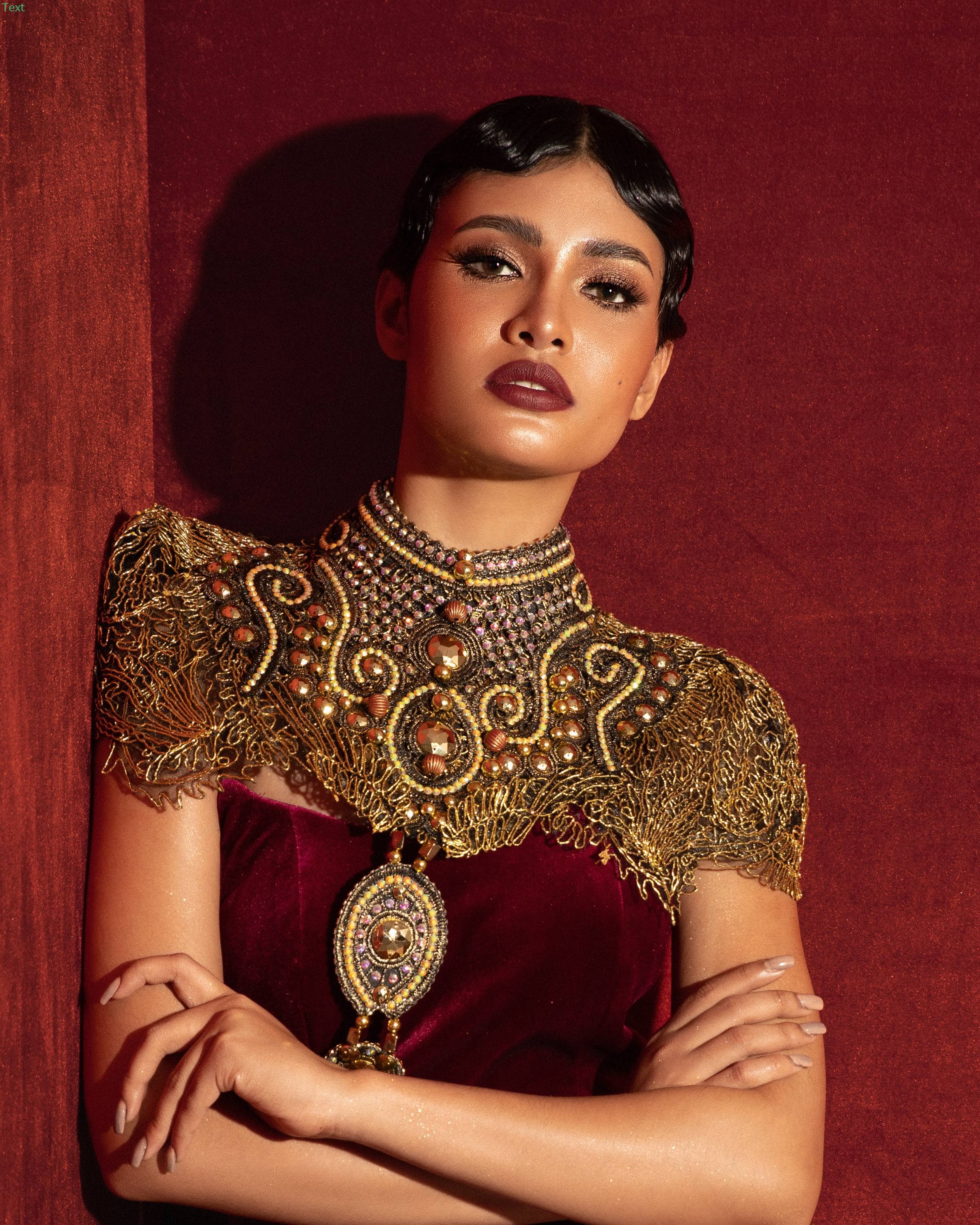 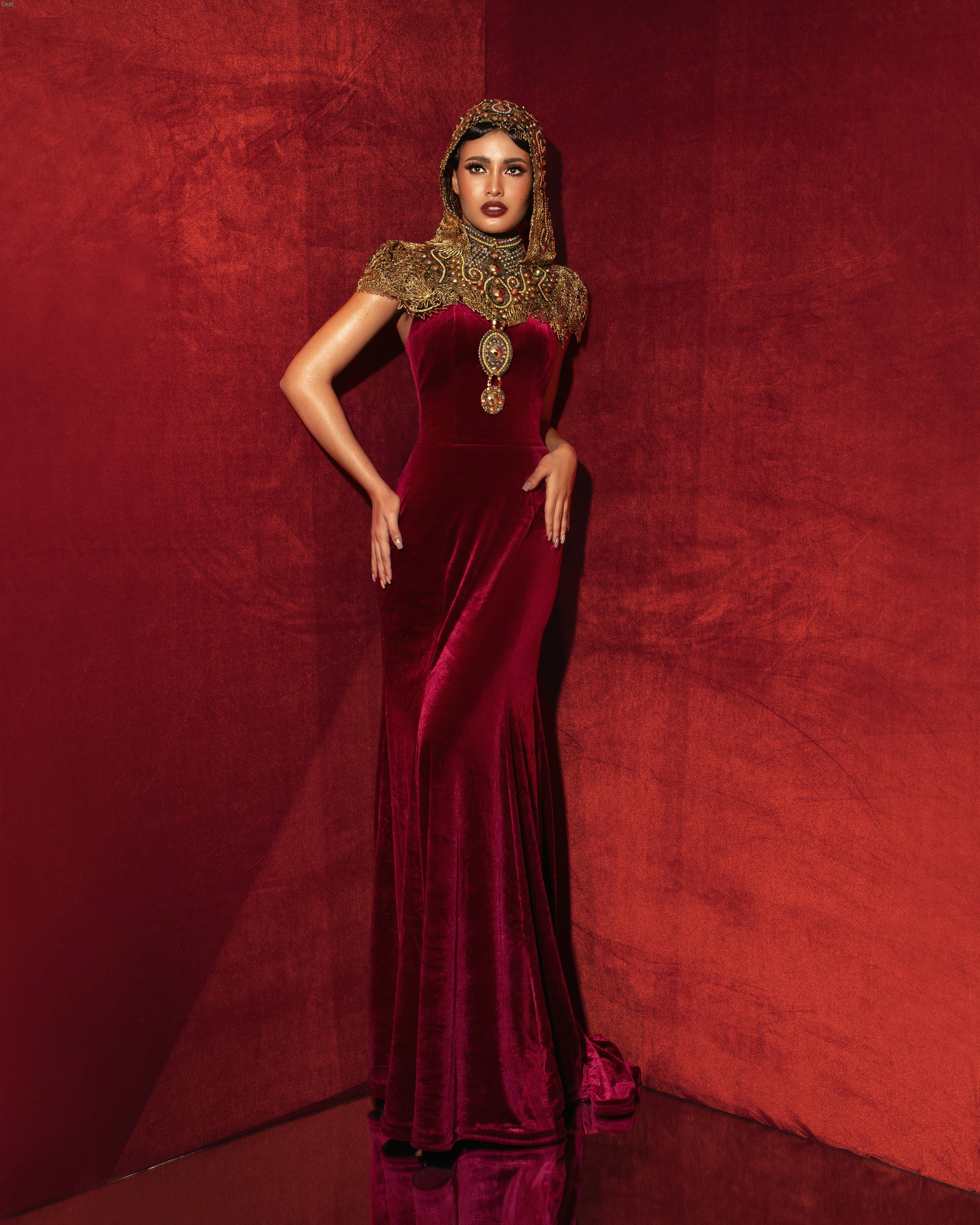 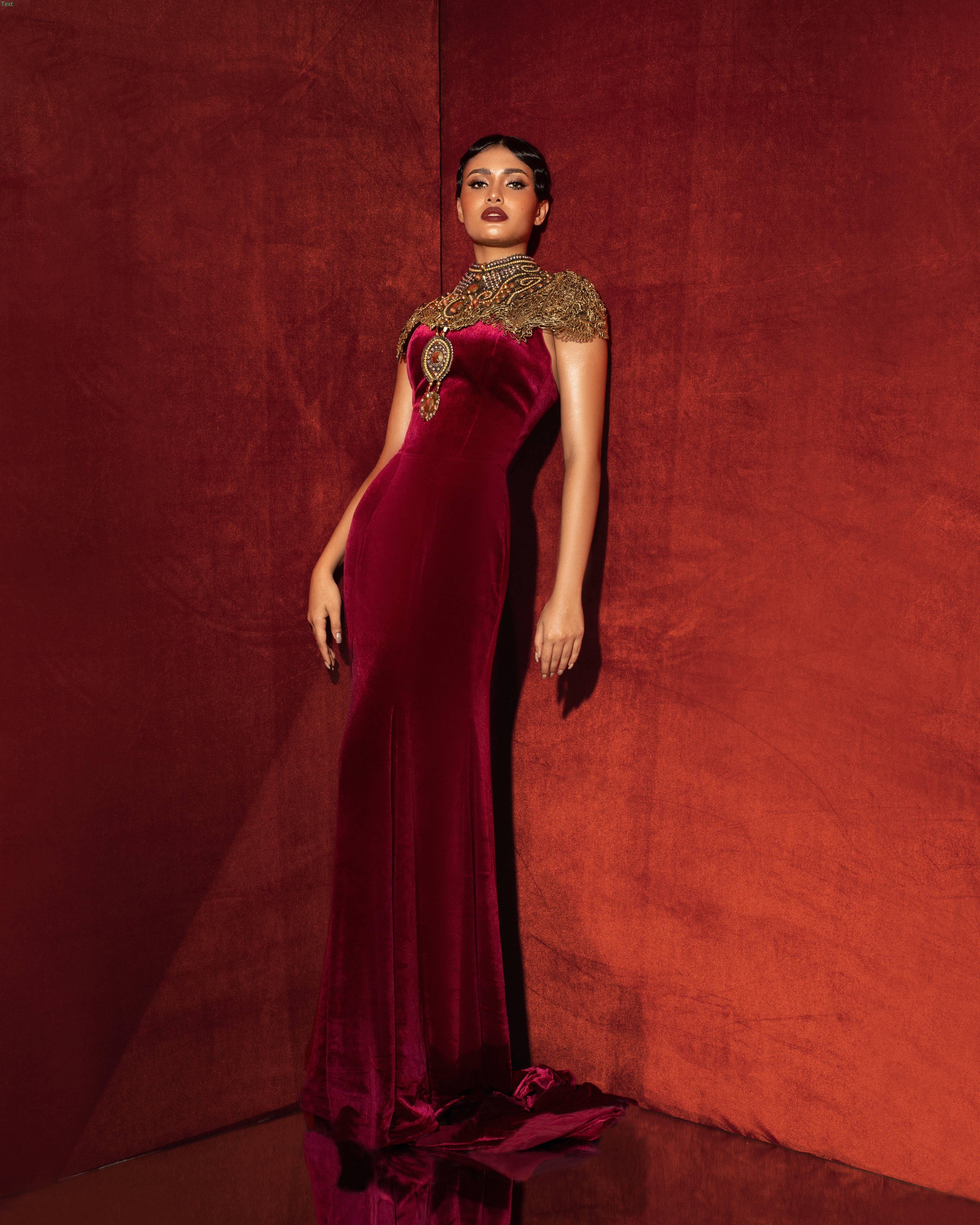 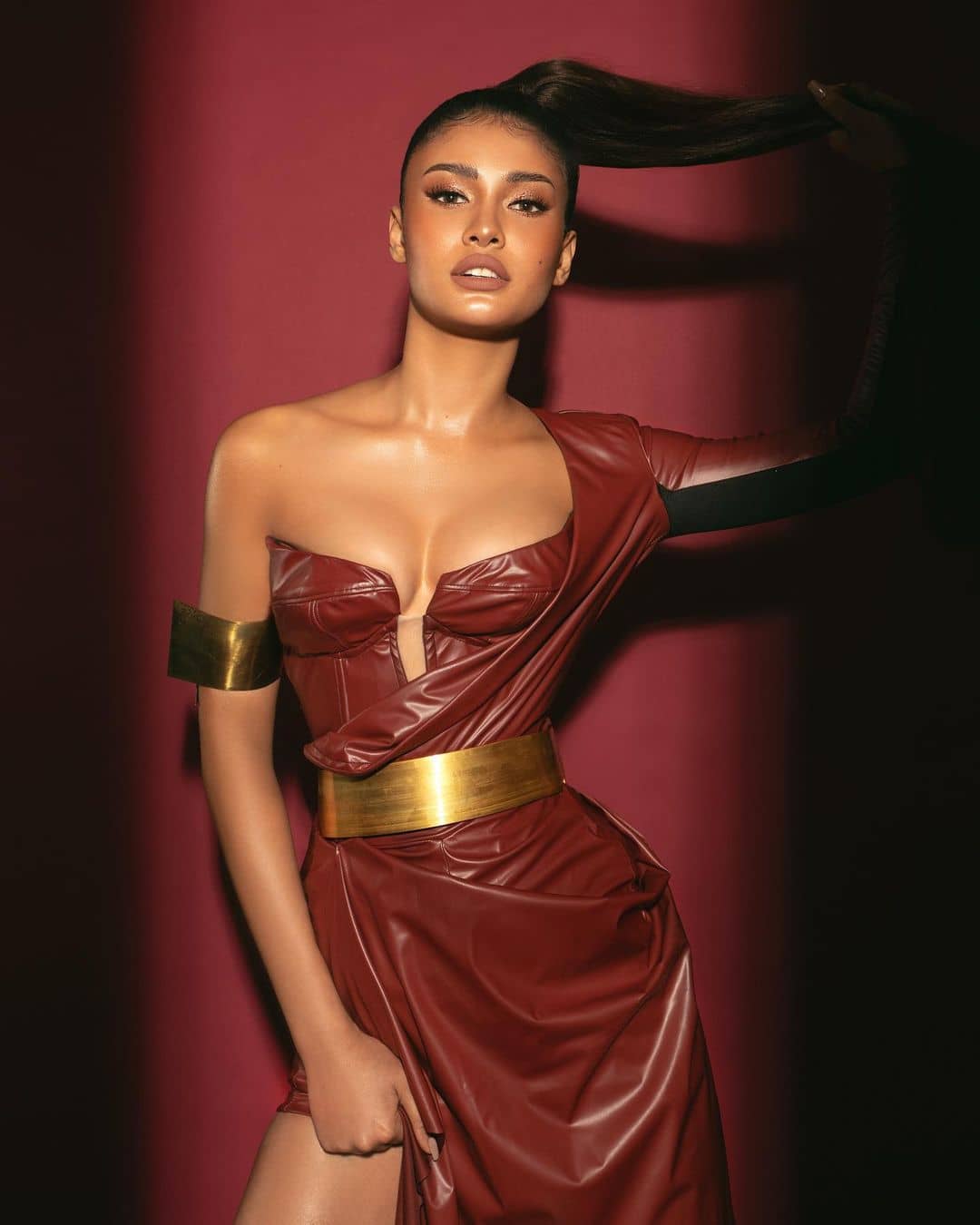 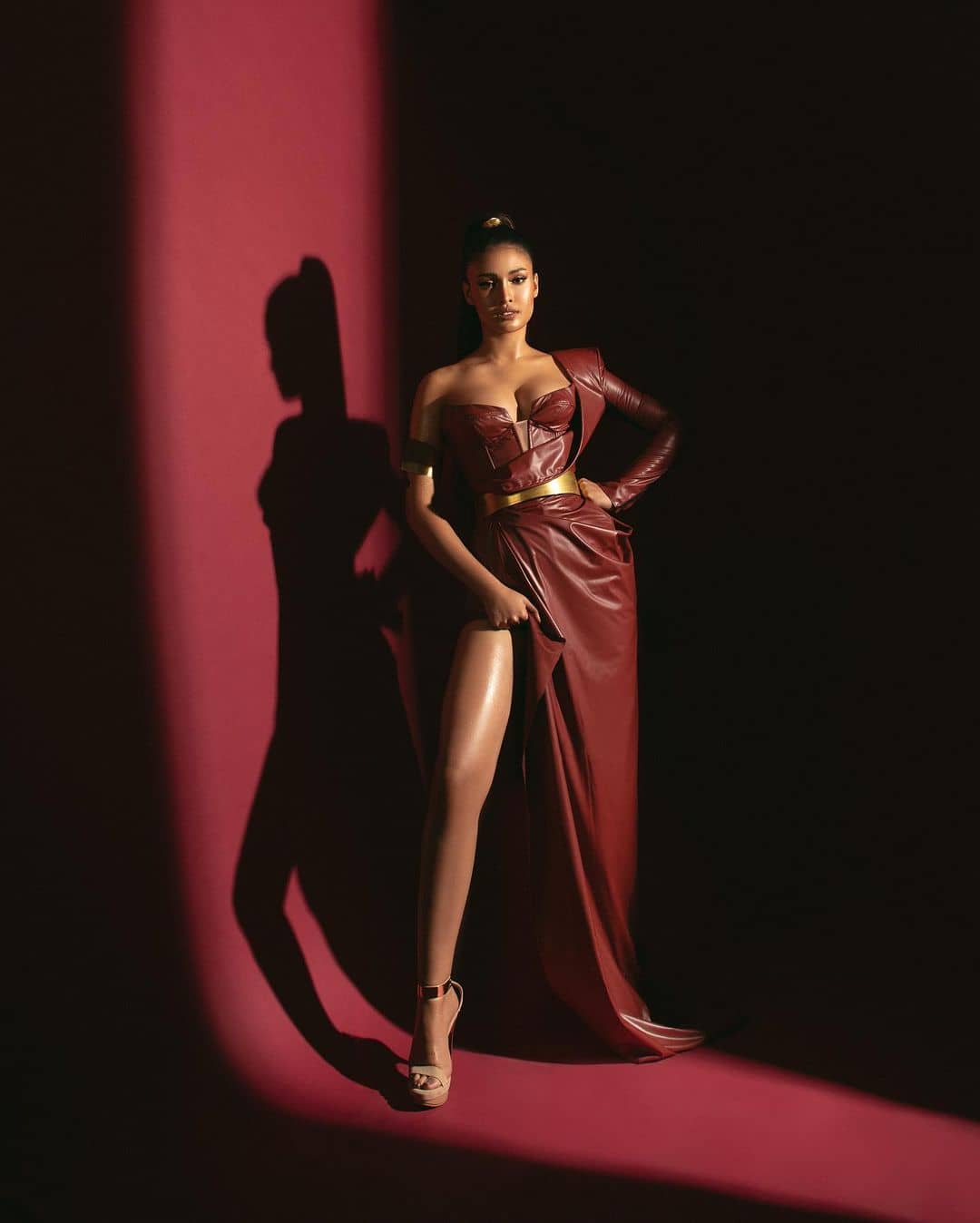 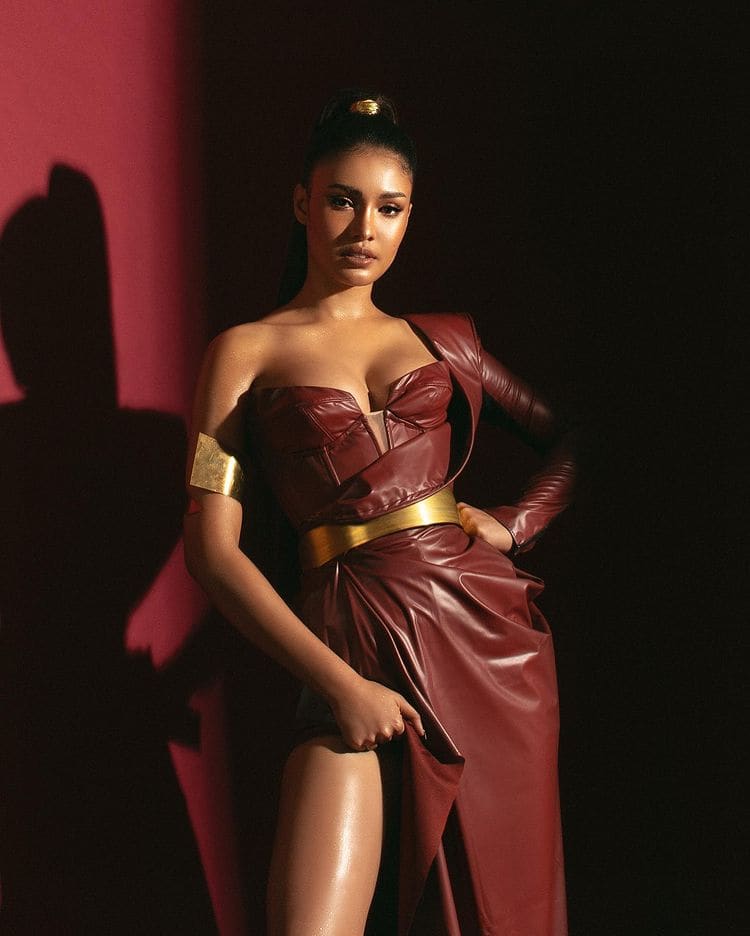 The release of this photo shoot also coincided with a milestone, as Rabiya just reached and surpassed 800,000 followers on Instagram.

Prior to this shoot, Rabiya also collaborated with Seven for another editorial, wherein she wore a powerful outfit of an oxblood synthetic leather dress by designer Mara Chua. The theme of that shoot was "Athena the Goddess of Wisdom and War x Ang Makabagong Darna." Of that concept, Seven says, "[It] signifies her platform, which is education. Palaban si Rabiya at matalino." They particularly chose the color red, too, because it mirrors Rabiya's "fiery yet humble attitude."

In a previous interview, Rabiya did say that she loves the color red because it symbolizes a phenomenal woman. "Red is power, and I am red," she said.

With the help of her styling team Rain Dagala and Em Millan, Rabiya has also been making heads turn in Hollywood one proudly Filipino-made outfit after another for her pre-coronation night looks. She has so far worn creations by Chino Christopherson, Marc Rancy, Marlon Tuazon, Veejay Floresca, Zyrill Jacinto, Franko Barrio, Mikee Andrei, Nono Palmos, and Ushi Sato.

Watch Miss Universe Philippines Rabiya Mateo vie for the crown alongside other candidates from around the globe on May 17, Monday, starting at 8 am on A2Z, with a replay at 10:30 pm. The pageant, which will be held at Seminole Hard Rock Hotel & Casino in Hollywood, Florida, USA will also be aired on Sunday’s Best on Kapamilya Channel on May 23 at 9:45 pm. Viewers in the Philippines can stream this replay online on iWantTFC. Viewers will get another chance to catch it again on cable TV via Metro Channel on May 24 at 12 nn and 10 pm, May 26 at 5 pm, and May 29 at 8:30 am. 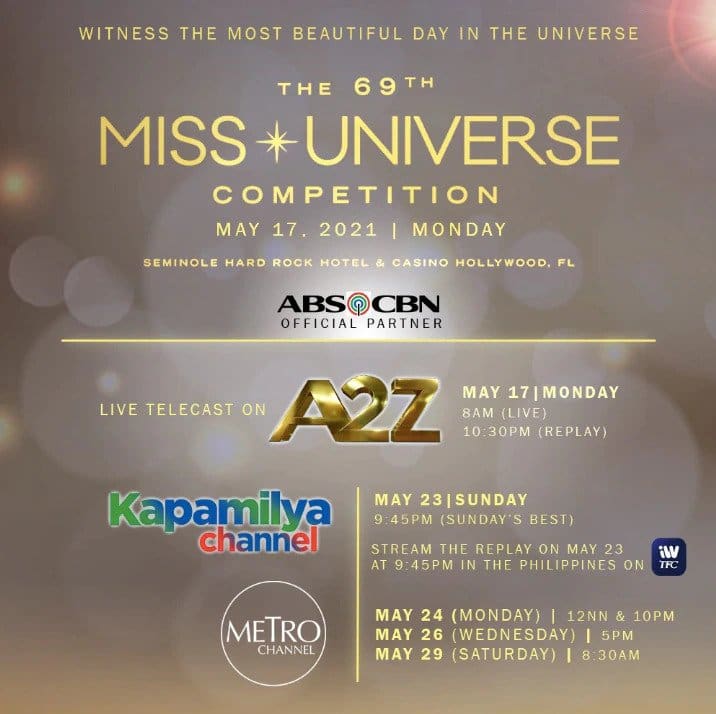 Photography and creative direction by Seven Barretto of Studio 7 Manila