Celebrate The Month Of Hearts In The City Of Love, Iloilo

Why fly a thousand miles away from home when you can take your loved one to our very own City of Love? Check out these 8 things to do in Iloilo, and fall in love with our own local heritage, arts and culture, and natural resources

Iloilo City has been synonymous to the Dinagyang, one of the country’s pioneer festivals dedicated to the Sto. Niño held every January. The revelry might have died down, but in the so-called Month of Love, this eclectic place reinvents itself as the City of Love. It’s not trying to be a copycat of Paris, but it has its own charm borne out of the warm hospitable trait of the Ilonggos which have made their lovely place even lovelier.

Here are some of the lovely things you can do in the City of Love this Valentine’s Day and beyond.

A romantic dinner is an indispensable element in the Day of the Hearts, and in this department, Iloilo will pass with flying colors because of its great-tasting cuisine from local favorites to the international flavors. Must-tastes are the signature La Paz batchoy, pansit molo, the queen siopao from Roberto’s, and bakery products from Biscocho Haus and Panaderia de Molo.

The city boasts of some 2,000 food and beverage outlets which cater to different taste buds, budgets and ambiances. Rafael’s Cucina del Sur of Chef Tibong Jardeleza captures both the traditional dishes and the fancier fare in his cozy but unpretentious resto in Jaro district. A celebrity chef in his own right, his stories and solicitous character make dining both a culinary and cultural journey.

Blend The Old And The New

Iloilo is a unique mixture of Old World charm and modern living. During the Spanish era, it has been bestowed the title “La Muy Leal Y Noble Ciudad” (The Most Loyal and Noble City) and later “Queen Regent’s City in the South” by Queen Regent Maria Cristina. Churches exude the grandeur of the Catholic faith, while ancestral houses are well-preserved or have found adaptive reuse as a heritage house, museum or tourist establishment.

Camiña Balay nga Bato | Bernard L. Supetran
Camiña Balay nga Bato, the circa-1860s Avanceña house, is a living museum which offers a history tour, hot homemade tsokolate, mouthwatering local delicacies, and native souvenirs for sale. Iloilo was also named one of the world’s Most Livable Cities because of its splendid urban renewal program evident in its River Esplanade Project which landscaped and revived a dead river which has made it a promenaders’ and joggers’ haven.
Iloilo River Esplanade

Discover your green thumb at the farm resorts outside the city which offer quaint but romantic and well-appointed rooms, recreational facilities, and a healthy farm-to-table dining experience. These are Ephrathah Farm in Badiangan, Damires Hills in Janiuay, and GarinFarm Pilgrimage Resort in San Joaquin, which has an interesting pilgrimage section which features life-size Biblical sculptures and the 480-step Stations of the Cross which is the proverbial “stairway to heaven.”

Iloilo province’s northeastern towns are dotted with powdery beaches and crystalline waters—minus the madding crowd. In Concepcion, hop around Pan de Azucar which is so-called because of its sugar-like sand, and Bulubadiangan which is among the archipelago’s top nine most amazing sandbars by online travel site Skyscanner. Further up north in Carles is the Gigantes island chain composed of the Cabugao Gamay, Tangke saltwater lagoon, Antonia Island, Bantigue Sandbar, and Tambaliza.

Immerse In Nature And Adventure

The allure of nature exudes a romantic air on top of the usual dinner for two. Explore Mari-it Wildlife Conservation Park in Lambunao, Casa Fiammeta equestrian school in Barotac Nuevo, and the flourishing zoological and botanical landscape of Igbaras which has a series of towering waterfalls. For a cool and conducive hideaway, hie off to Bucari upland ecotourism zone in Leon which is regarded as province’s summer capital, and has camping, lodging, and recreational facilities.

Relax And Get Refreshed

Get pampered at Waterworld Iloilo, a theme park in Jaro which boasts of swimming pools, giant slides, and hydromassages. Indulge in a soothing massage at the Kasanag Well-being Centre, known for its signature hilot massage and other traditional healing therapies capped by a soothing cup of organic tea. Located at the historic Magdalena Jalandoni Mansion, it also renders room service to hotels for guest’s convenience.

As a bastion of Catholicism, the province has notable houses of worship which are built in Neo-Gothic architectural styles located in the towns of Pavia, Cabatuan, Leon, Guimbal, Dueñas, San Joaquin, Lambunao, Dueñas, Passi, Alimodian, Dumangas and Banate.

Not to be missed are the Sto. Tomas de Villanueva Church in Miagao, a massive Baroque-Romanesque “fortress church” which is a UNESCO World Heritage Site, and the Sta. Barbara Church where the Philippine flag was raised for the first time in the Visayas when Filipinos declared independence from Spain in 1898. Within the city is the St. Anne Church in Molo, often used a venue of cultural and musical events, which is fronted by a Greek-themed gazebo and plaza and the restored Yusay-Consing ancestral house that also has a souvenir shop called Molo Mansion.

A growing number of couples find museum visits a sexy date as it reveals a person’s soul and intellect. The city has a plethora of these repositories of heritage which attest to Iloilo’s genteel character—the newly-completed regional branch of The National Museum, Casa Mariquit of the prominent Lopez family, and the iconic Museo Iloilo. In nearby Sta. Barbara is the Centennial Museum which has a remarkable ethnological and historical compendium, as well as memorabilia of revolutionary leader Gen. Martin Delgado.

Where To Stay in Iloilo

Ready to explore the Philippines' City of Love? Here are some recommendations on where you can stay during your visit:

Park Inn by Radisson, a newly-opened mid-priced accommodation within the SM City Iloilo complex, is an ideal location, as it is a transport hub to other key points within the province.

For a local touch, The Mansion (formerly the Sarabia Manor Hotel) evokes the nostalgia of the good old days. 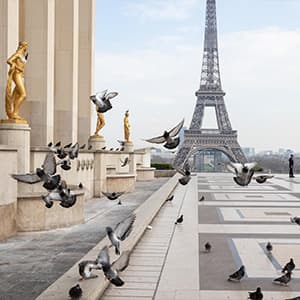 LOOK: Deserted Cities Around The World In The Time Of COVID-19